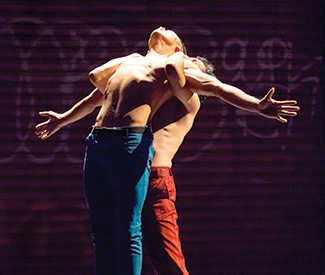 DANCE Considering its name — Hush — it should have come as no surprise that Joe Goode’s latest look at the ultimate loneliness that infects us all, whether imposed or self-inflicted, is a very quiet piece. Being hushed is something we learn as babies, at the family table, in school, and at the movies. But more seriously, it becomes an essential tool for survival for those who may be perceived as “different.”

At barely an hour, Hush is another variation on a theme that has threaded itself through Goode’s works since the beginning. Unfortunately, unless you are a romantic or naïve, being on the outside happens to be a quintessential human condition. Goode approaches it from the particular perspective of a gay man. It’s his genius that he manages to frequently mine that driving concern for new and convincing theatrical expressions — a quality that distinguishes art from advocacy.

Hush feels like chamber music. It’s condensed, tight, and weaves a spell like a spider’s web. The tone is subdued, and there’s a film noir quality to Erik Flatmo’s set, with its half-empty bar. You can practically smell stale beer. Foley artist Sudhu Tewari’s brilliant sound effects suffuse this environment with a hyper-real vibe — somewhere between a comic strip and the proverbial nails on a chalkboard board.

While Goode doesn’t perform himself, you can hear him in the language for his characters, which is drawn from interviews with him (a practice he already used in last year’s When We Fall Apart). His own voice comes through most explicitly in Hush’s songs, some of whose lyrics were printed in the program. I do wish we had been given access to all of them.

But Hush can also feel like a musical in which dance stays subsidiary to other theatrical aspects. At its strongest, it takes over in ways that words cannot.

The piece focuses on two characters, portrayed by Melecio Estrella as a “sissy boy,” and Damara Vita Ganley, as a woman whose “body got touched on places I didn’t want to.” Neither of these creations accept victimhood. They refuse to be hushed. Both performers are accomplished actor-dancers who were a joy to watch every second they were on stage, and they happen to also be the company’s best singers. At first Estrella is hardly able to get a sound out in the bar’s open mic, but he learns quickly. Finally, he stands up to his bullying tormentors and spits out a lengthy scholarly disquisition on sexuality and asexuality that sounded like it was straight out of an academic paper. I have no idea whether this was science or imagination, but Estrella was magnificent in a feat of rhetoric that could not be ignored and ultimately empowered him.

Putting a rape scene on stage is probably the most daring thing Goode has done. I dreaded the prospect. On her way home — the road she follows looks like something out of The Wizard of Oz — Ganley drops her purse, stops to pick up a flower (a sentimental touch), and is attacked by three hooded individuals. In the choreography, performed in silence if I remember correctly, she gets lifted, pulled, yanked, and stretched for a considerable amount of time. In the end she picks up her purse and walks home, her heels clacking in the night. Later on, the laconic give-and-takes between her and Andrew Ward, who tries to help, beautifully suggests a relationship based on mutual respect.

Elsewhere, a gorgeous duet between Estrella and Felipe Barrueto-Cabello called up an increasingly passionate love affair. It started out with almost accidental touches and withdrawals — Barrueto-Cabello is a master of reticence — but gradually built into a tempestuous encounter when, the men having stripped off their undershirts, you couldn’t quite tell any more who was who.

If I have one regret about Hush is that the stories of the other characters were not more developed: Jessica Swanson as the driven career woman, Ward’s sympathetic bartender-listener, Alexander Zendzian’s vegetable lover, and Barrueto-Cabello’s moonstruck lover. The scene between the careerist Swanson and the pickle-making Zendzian — thank you, sound designer Tewari — sparkled with humor, but it just was too cartoonish to become emotionally resonant.

Hush ends with a rousing, operatic finale, a song-and-dance number in which the cast proclaimed its determination to be silenced no longer. No question that’s a welcome thought — but given the complexities of the issues involved, it also felt a little too much like Broadway. *