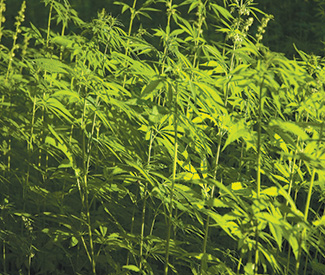 After being stuck in legislative limbo for 14 years, industrial hemp will soon be a legally sanctioned agricultural crop in the state of California.

The California Industrial Hemp Farming Act (SB 566) was signed into law by Gov. Jerry Brown on Sept. 25, ending years of deliberation dating back to 1999, a process that included multiple gubernatorial vetoes. The freshly signed law will allow approved California residents to grow hemp for industrial purposes by reclassifying the once-felonious plant as a “fiber or oilseed crop.”

SB 566, a bill championed since 2005 by Sen. Mark Leno (D-SF), defines industrial hemp as the “nonpsychoactive types of the plant Cannabis saliva L. and the seed produced therefrom, having no more than 3/10 of 1 percent of tetrahydrocannabinol (THC) contained in the dried flowering tops.”

In simpler terms: It doesn’t protect marijuana, but rather marijuana’s less mind-bending cousin, which is far more useful as a raw industrial material.

“We are very pleased to have the signature,” Sen. Leno told the Guardian. “It’s been a 10-year effort to get here. It’s a job still, but [the passing of SB 566] will help sustain family farms in California for the future and likely create more job opportunities. Hemp is a $500 million a year industry in California, and it’s growing at 10 percent annually.”

California now follows in the footsteps of nine other states and 30 other countries that have reclassified the innocuous plant as a crop with agricultural and commercial value. And it is quite valuable.

“This is a miracle plant that has served the planet Earth well for, literally, millennia, and that we currently legally manufacture and sell thousands of hemp products including food, clothing, shelter, paper, fuel, all biodegradable products,” said Leno. “It’s renewable every 90 days, grows without herbicides, pesticides and fungicides, and needs less water than corn. It is the definition of sustainability.”

But the reputation of hemp hasn’t always had champions like Leno. Since the initial proposal of Assembly House Resolution 32 back in 1999, the legislation has been vetoed four times by three different governors. Former Gov. Arnold Schwarzenegger cited a “false sense of security” he feared would be cultivated among the growers of the crop, due to its illegality at a federal level.

Gov. Brown had previously shot down the proposed legislation in 2011, citing a gap in state and federal law as the reason. However, he did remark in his veto message at the time that “it is absurd that hemp is being imported into the state, but our farmers cannot grow it.”

And it would seem that Brown’s recognition of hemp’s merits finally outweighed his concern over the potential for California growers to face federal prosecution, which is a major relief for the architects of SB 566. Now Californians can stop relying on imported hemp from Mexico and Canada (among other places) and start legally manufacturing their own.

“We currently manufacture literally thousands of [hemp] products — legally — and sell them,” said Leno. “This is why this issue has been so nonsensical.”

The “nonsensical” issue has had deep roots, given hemp’s historically ambiguous federal standing. As Brown’s 2011 veto message noted, “federal law clearly establishes that all cannabis plants, including industrial hemp, are marijuana, which is a federally regulated controlled substance.”

“We’ve always believed that there is no federal preemption, because we believe that that court case ruled that Congress had knowingly exempted industrial hemp from the Controlled Substances Act of 1970 –because it’s not a drug,” said Leno.

Now the state of California can do what more than 30 countries (including Canada, Great Britain, France, Germany, and China) and nine states are already doing: cultivating and processing a plant that many have touted as the “miracle plant.”

Now that SB 566 has passed, however, the looming question still remains as to how the federal government will respond. But Leno is confident that it will respect the will of California lawmakers.

“I have great confidence in a recent statement by Attorney General Eric Holder,” said Leno. “He’s said that if a state puts into place a legal allowance and regulatory scheme, that the federal government would not interfere with marijuana. Now, we need clarification between hemp and marijuana, but there’s no sensical way that that could be interpreted that hemp is excluded, given that hemp’s not a drug.”

Either way, hemp is on the horizon here in California.