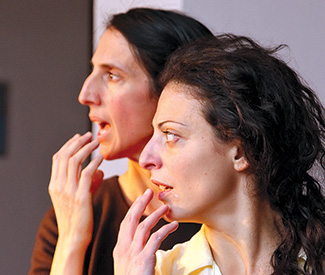 THEATER An actor rakes a thick piece of chalk across the floor with a few swift, violent strokes, transforming a bare stage into the layout of an apartment or the plan of a Polish street. Three more actors join him in filling out the scenes, uprooted from time and rearranged in a deliberate design of their own — scenes erased and redrawn with practically every shift in a fluid, snaking narrative that joins the present day with World War II, the Warsaw Ghetto, and the career of a young Jewish woman named Izolda, who passes herself off as an Aryan in a heroic attempt to save herself and her husband from an apocalyptic night.

If the ghostly chalk outlines of the set morph with a brusqueness that suggests the ferocity of both war and time to remake the world, Izolda’s story of love and determination offers an agency of its own. Wrenched from the daunting numbers and general darkness of the Holocaust, they come into mesmerizing focus in The King of Hearts is Off Again, a barebones yet highly evocative piece of physical theater by Warsaw’s Studium Teatralne, which adapts Polish journalist-turned-author Hanna Krall’s internationally acclaimed 2006 novel, Chasing the King of Hearts (now available in an English translation from Peirene Press).

This week, in Studium Teatralne’s Bay Area debut, the San Francisco International Arts Festival presents The King of Hearts is Off Again in both San Francisco and the East Bay. Performed in Polish with English supertitles, the piece showcases the work of a company grounded in the influential career of Polish director Jerzy Grotowski (1933–1999), world-renowned innovator and practical theoretician of “poor theater.”

Piotr Borowski, who directed the production, was an actor and musician with Poland’s famed experimental company Teatr Gardzienice in the 1970s and ’80s. After that he joined the Workcenter of Jerzy Grotowski in Pantedera, Italy, where he stayed until 1994, when he became artistic director of Studium Teatralne.

“Mainly what I’ve acquired from working with Grotowski is a constant, systematic work on the harmony of three things: body, feelings, and intellect,” relates Borowski in a recent email exchange. “Incidentally, this idea is few thousand years old. On the other hand, the topics for my dramatic work flow directly from the circumstances of our contemporary times.”

The details and lacunae of Izolda’s dramatized but true story emerge from the ghostly outlines of a past now barely visible in Poland, suspended somewhere between blissful ignorance and perturbing rumination.

“In Poland, before World War II, Jews were about 10 percent of the population,” continues Borowski, “about three million people. The ones that were left numbered 20,000. We have struggled to convey this emptiness through the empty stage, minimal props, a small number of actors, in order to focus on the main idea. One of the most important things in the set is the floor. It is an old Synagogue’s polychrome. We are stepping on it, symbolically ruining it. The world’s culture of sacral paintings is being destroyed. There are hardly any Jews in Poland anymore. Most of all, there are hardly any traces of their culture left. Our viewers in Poland can feel that, and we talk about it a lot, especially with the younger generation.”

Grotowski and the refined aesthetics of poor theater grew in the 1960s in part as a response to the lavish spectacle offered by cinema, but also in a politically repressive period in which metaphor was key to discussing the lived reality shared by artists and their audience. Today’s Polish stage has evolved in strikingly different directions since 1989 and the fall of communism. The avant-garde today — in the work of Krystian Lupa or Krzysztof Warlikowski, for example — tends toward work of monumental proportions, as Borowski readily admits.

“When it comes to the direction of the Polish theater today I am not the go-to expert. I am still representing the off-center of theater whose significance is marginal today. It used to have a clear role in times of a system where censorship existed. But now, when we have freedom and a fierce market economy, the big productions and money become more important to people.”

Borowski adds that it is not a question of one approach or another, but rather of making work that confronts contemporary reality.

“It is essential that we create performances that are relevant for today. That has always been hard to do, as far as I can remember. The main goal that I had set out for myself is the goal towards human development, and what I’m trying to show on stage is the [way] beyond simple acceptance and habitual perception of so many things. Not a rebellion but an alternate perception.” *

THE KING OF HEARTS IS OFF AGAIN