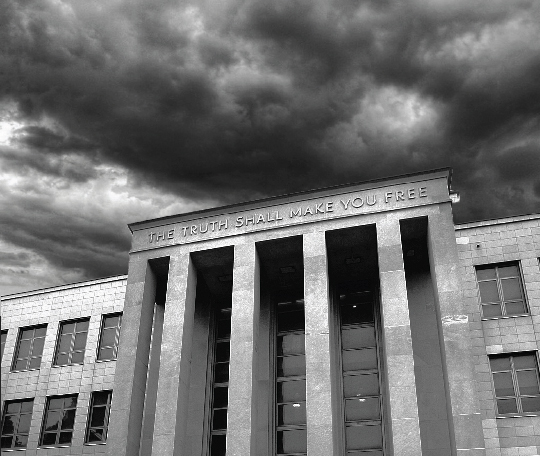 The suit is directed against the Accrediting Commission for Community and Junior Colleges, which pronounced the college’s death sentence July 3 by promising to revoke its accreditation in a year, without which a school cannot receive state funding and its students cannot get federal loans.

Now, the ACCJC finds itself the institution under investigation by the feds and even City Attorney Dennis Herrera, and the CFT lawsuit is the latest legal challenge to the accreditors.

The CFT charged the accrediting commission with using unfair and illegal business practices in its efforts to abolish City College. When asked for a statement about the impending lawsuit, ACCJC representative Tom Lane declined to comment.

“The ACCJC must be held accountable for their reckless, irresponsible and illegal actions,” CFT President Joshua Pechtalt explained at the Sept. 23 press conference held on the steps of City Hall, where the suit was announced. More importantly, Pechtalt said, winning this lawsuit could potentially stop the closure of CCSF.

A group of students, faculty, and elected officials stood with Pechtalt on the stone steps. One by one, they enumerated the improper activities that will be the basis of their lawsuit against the ACCJC: failing to adhere to its own policies and bylaws, violations of state and federal laws, and sanctioning CCSF without just cause.

Assemblymember Tom Ammiano said that the illegal behavior must stop here and now.

“The blatant lack of transparency, the loose interpretation of the rules, all seen through a lens of hubris and elitism, cannot continue,” he said. “San Francisco is our backyard and the college is our treasure.”

While Ammiano admitted that CCSF is not without its flaws and areas in need of improvement, he was quick to assert that closing the college was not the solution. “Stay out of our backyard unless you have something constructive to say,” he declared.

CCSF Student Trustee Shanell Williams assured the crowd that the lawsuit would be won. “The diverse population of the San Francisco Bay Area, including working families, single parents, new immigrants and others, depends greatly on this college being here,” she said. “If we lose City, we are going to be on our way to being an indentured, working class state.”

If the ACCJC succeeds in San Francisco, it will pave the way for identical treatment of other schools across the state, Williams said. Likewise, CCSF triumphing over the commission would be a victory for every community college in California.

Sup. David Campos also recognized the vital importance of CCSF’s continued existence. “We cannot have the American dream alive in San Francisco if City College closes,” he said. “This fight is about the soul of our city. ”

The US Department of Education has cited the ACCJC for failing to follow its own rules and procedures. A month ago, the Joint Legislative Audit Committee began investigating the commission. The following day, Herrera filed a lawsuit against the ACCJC, claiming it had illegally allowed its advocacy and political bias to prejudice its evaluation of college accreditation standards.

A new report released by the city’s Budget and Legislative Analyst on Sept. 16 detailed the economic impact to San Francisco if City College were to close. The report was requested by Supervisor Eric Mar. We’ve detailed some of the report’s findings in the infographic below.