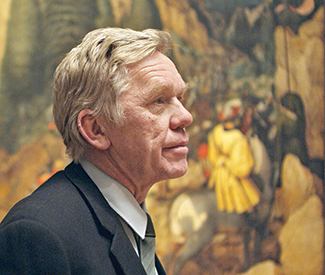 FILM Filmmaker Jem Cohen is known for his artful documentaries, including 2003 Fugazi portrait Instrument. His latest, Museum Hours, has many doc-like qualities, but it’s the closest he’s come to a narrative. Set in Vienna, it follows Canadian Anne (Mary Margaret O’Hara) as she arrives to care for a dying cousin. Adrift in an unfamiliar city, she meets Johann (Bobby Sommer), a guard at the stately Kunsthistorisches Museum. He offers to show her around and serve as translator, and a genuine friendship — based on a shared affection for art — is formed.

Like the artist Bruegel, whose paintings so fascinate his characters, Cohen focuses on the details of everyday life; his camera lingers as carefully on street scenes as it does on the museum’s priceless artifacts. I caught up with Cohen — a Persistence of Vision Award winner at this year’s SF International Film Festival — just before Museum Hours‘ theatrical release.

Jem Cohen I’m always fascinated by the city beneath the city, and particularly the city that is not made for tourists. Vienna is known for [the Vienna State Opera], and glorious views — and all of that is fine. I don’t have anything against it. But there are back streets, neighborhoods with immigrants in them, and places where people who don’t have a lot of money go. All of that is something that I wanted to bring to the surface, but in a natural way, because [Anne] is stuck there, wandering, and she doesn’t have a lot of dough.

SFBG Working in the Bruegel room, Johann muses that he always notices something new each time he looks at the paintings. Do you feel like that about Vienna?

SFBG What drew you to Bruegel?

JC Standing in front of his paintings, I felt this uncanny kinship that had a lot to do with my work as a street photographer. In particular, it’s this feeling of being in the random particle generator of life, and not knowing exactly where to look. It’s a very particular thing to have events going on all over the frame and you’re not told, “This is the one important thing.” You have an openness which allows you to constantly shift what is foreground and what is background, and try to make something out of that. I feel that’s part of the street photography tradition, and it’s part of what Bruegel was sort of miraculously doing in the 16th century.

SFBG Museum Hours contains an extended scene of a museum docent delivering a lecture about Bruegel to a tour group. Why did you include that?

JC I wasn’t making Museum Hours for any market. But if I had been, that scene would have been the kiss of death. Everyone would have said, “You’re out of your mind. You can’t just drop a 10-minute lecture in the middle of a movie and expect people to be OK with that.”

But the scene with the docent allows me to introduce a lot of things that are important to me, in terms of how I feel about art. It also suggests that the main characters of your movie are not the only human interaction that everybody needs to be focused on. Something else could happen; the guard could turn the corner and hear a guest lecturer, and become immersed in that.

SFBG I couldn’t tell if she actually was a lecturer, or an actor playing one.

JC One of the things that I most hoped to do in the film was to have people unsure of what is documentary material and what is not, and unsure of who is acting and who is not, and unsure of whether the movie is a city portait or a narrative about these strangers who meet. Or whether it’s really about Pieter Bruegel the Elder, or about museums as a possible crossroads.

That slippery quality is one of the most valuable things to me about this film, as well as [my film] Chain (2004), which also involved non-actors and actors, and having it be essentially an open question.

SFBG Museum Hours has quite a different tone than Chain. It’s a lot friendlier, for lack of a better word.

JC Chain is, in some regards, a horror film about a kind of depersonalization and homogenization of the world that’s insidious and, in its way, quite brutal. Museum Hours is a film that has, at its core, a belief in art as something that goes from past to future, and actually continues as a viable human communication. It’s also about friendship and the kindness of strangers.

I don’t see those two projects as antithetical; they’re just different facets of the same world. I don’t feel, as a filmmaker or as a person, that everything goes either light or dark. But I’m glad that I don’t always have to make movies that are angry, because Chain is an angry film. It had to be.

SFBG How did you cast your lead actors?

JC I had seen Mary Margaret O’Hara as a musician almost 25 years ago. I was just so taken by her presence that I had in the back of my mind that someday I would love to work with her on a film.

When I met Bobby, he was working as a driver and a waiter. I used him in one earlier project just to read some German text, and I loved the way he sounded. I also liked the fact that he had a lot of odd life experience that he could bring to the role.

SFBG They’re both credited with writing some of the dialogue, too.

JC It’s kind of a half-scripted movie. Sometimes, it’s actually one of them speaking lines that I had written, with the other one being completely free to respond. Again, I tried to make it unclear what lines are scripted and what lines are not — so that the film feels more like life to me.

I wanted to make a down-to-earth movie. I thought it would be lethal to deal with, basically, art, life, and death, and do it in a pretentious way. People have their range of passions, which can include Rembrandt and AC/DC. That’s fine! That’s the way I live.

SFBG I’d love to see Museum Hours in a double feature with The Mill and the Cross (2011). What did you think of that film?

JC I didn’t see it! I felt like I couldn’t see somebody else’s Bruegel movie while I was making my own. I will seek it out and watch it now, because I heard it’s quite lovely. It’s really nice to me that that so many people have responded to Bruegel over the years. I think there’s something very “of the people” about him that also intrigues those of us who work in cinema. *