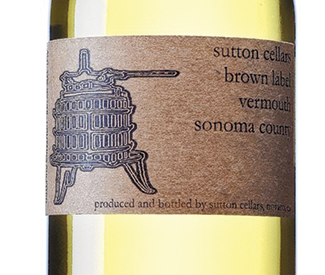 BEER + WINE This is the kind of Facebook post we’ve come to expect from Sutton Cellars in Dogpatch: “After a birthday party at the winery last night, helping to break up a skinhead girl fight at Slim’s while watching Hepcat, and staying way past last call at Nopa … We’ll be opening a little late today. Come join us for Sutton and soda.”

Three years ago, when Carl Sutton opened his warehouse winery in San Francisco’s scrappiest little neighborhood, he became the epitome of hip-chill urban vintners. Jug Sundays, his $5-ish afternoon food and wine tastings, draw many to the spot, and his small batch production — of rose, merlot, cider, and more — has become a source of civic pride.

But Sutton has a real aperitif ace up his sleeve: addictive Sutton Cellars Brown Label Vermouth. Big and slightly dry, complex yet unfussy, nicely thick and citrus-y, infused with a special blend of 17 botanicals in a process Sutton says is “Italian influenced” — it’s unlike any vermouth I’ve tasted, but still beams me directly to sunny late afternoons in southern European plazas, times and places when I’ve happily been on an IV drip of the stuff. It’s a real local winner worth seeking out and sipping on its own (or with soda, as suggested above).

SF Bay Guardian San Francisco seems like a natural vermouth hotspot, but the stuff is still pretty rare here. How has the reception been?

Carl Sutton We’ve had a great response in San Francisco for the most part. Some people still have a bad association with vermouth because they’ve had poorly stored bottles. Once they understand that it’s technically wine and taste a really fresh bottle of vermouth, it changes their whole idea of it. When I debuted the Brown Label, no one had launched a new domestic vermouth in a decade. Bay Area people seem to be early adapters though, even if it’s a centuries-old beverage. We currently produce about 500 cases a year and we’re distributed in five states with more to come in the next year.

SFBG I’m mostly acquainted with vermouth via Spain. Is there something more “Italian” about your production or flavor?

CS Great question. While Spain, especially Barcelona and Madrid, have vermuterias (vermouth bars) and “la hora del vermut,” the beverage is more often identified with Italy and France. In all honesty humans have been putting botanicals in fermented beverages for millennia. A great book to read is Patrick McGovern’s Uncorking the Past, in which he discusses ancient fermentation sites and practices. We could talk for hours about this topic and still not get to the empirical origins of vermouth.

I was inspired by the plethora of botanical beverages in the world that we see very little of in the US. That, and a conversation with a bartender friend about one of my dessert wines. My flavor profile was to get away from the overly herbal profiles of traditional dry vermouth and shift it toward fruit and floral. Three of the 17 ingredients I’ll reveal are dried orange peel, chamomile, and rosemary. The first two are macro ingredients, the third is meant to be an underpinning, a suggestion. In that respect it’s like a lot of things that have been reinterpreted through the hands and mind of a California producer.

SFBG I’ve also sampled your Vin de Noix — a sweet wine based on green walnuts — which was deeply textured and insanely good.

CS Thanks. Because vermouth is widely consumed as an aperitif I wanted to produce something for after dinner. I was actually asked by a restaurateur friend, “Can you make a digestif wine? You know, like Fernet, but better?” (Put down the pitchforks and torches, people). I had recently had a French version, common to the Dordogne region, and I was totally intrigued. They drink it chilled sometimes and it’s generally sweeter. Again, it’s my California interpretation.

SFBG What other fortified wines or liqueurs do you produce?

CS We just released the fourth bottling of La Solera, a fortified red (now brown) that ages extensively in barrels and is finished by baking in the sun for 12 to 24 months in glass demijohns. They’re these traditional nine-to-15 gallon glass vessels that look like a light bulb.

The oldest wine in the blend is 1999 and it’s comprised of equal parts Zin and Syrah, 40 percent each, and 20 percent Carignane. I fortify to 18 percent ABV during fermentation and leave about eight percent residual sugar. Through the aging process it dries out, softens up, and drops substantial color. It’s a really transformative process. We also have a red vermouth in development as well as a couple of things I’m helping some local bars with. *