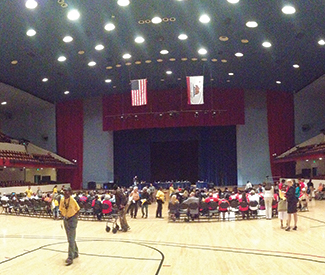 It will be a long war, but for now, Richmond is winning.

Two battles in the start of the city of Richmond’s war on foreclosures were fought and won in the past week. A US District Court of Appeals judge dismissed Wells Fargo’s lawsuit against Richmond’s controversial plan to use eminent domain to save residents with underwater mortgages (see “Not for sale,” Sept. 3). And Mayor Gayle McLaughlin successfully fought off legislation at the Richmond City Council to torpedo the plan before it started.

“I’m willing to go as high as the Supreme Court to settle this on behalf of our community,” McLaughlin told us. These are the first fledgling steps in that long fight, a fight McLaughlin calls a just cause.

Half of all mortgages in Richmond are underwater, and as homes get foreclosed upon, the problems stack up: blighted neighborhoods, declining property tax revenues, public employee layoffs, rising crime, and homeless families. To stem the tide of foreclosures, Richmond teamed with Mortgage Resolution Partners (MRP) to attempt to buy the loans of 624 underwater mortgages and allow the owners to keep their homes.

Richmond’s government sent out offers, and it is still waiting to hear back from the owners of the loans.

The controversy comes when the banks that hold the loans refuse to sell. In that case, Richmond would invoke the power of eminent domain to seize the mortgage loans.

Wells Fargo said in its lawsuit that this is a plan to line the pockets of MRP and the city of Richmond, a greedy and unconstitutional land grab. Eminent domain has never been used for this purpose, but as the judge noted in the lawsuit’s first hearing Sept. 12 in San Francisco, the plan has yet to be acted on.

“Okay, let’s end the suspense, I don’t believe (the case) is ripe for determination,” Judge Charles Breyer told the attorneys from Wells Fargo. “There are a series of steps that can or cannot take place…. If they do take place, that’s the time for the court to take a look at it.”

Breyer noted that if and when Richmond wanted to use eminent domain to seize mortgage loans, the council would need to file a resolution of necessity through state court. At that point, he could act.

On Sept. 16, the case was dismissed. Too little has happened, and it is entirely too early to make any decisions, Breyer said.

Stacey Leyton, a lawyer representing Richmond in the lawsuit, explained the judge’s decision plainly: “Courts are not supposed to review legislative actions before the (legislative body) has decided which action to take.”

The Guardian reached out to Wells Fargo but we were told that it had nothing to say beyond its court filings, and referred us to the investors in the loans, of which Wells Fargo is a trustee.

But why is Wells Fargo pushing so fast for the courts to intervene? The eminent domain plan could mean a possible loss of revenue for Wells Fargo and the investors it represents, sending chills down the spine of Wall Street, a representative of MRP said.

MRP founder John Vlahoplus told us the eminent domain tactic is powerful because for Wells Fargo, legally challenging every municipality in the United States is much tougher than paying off a few fat cats in Congress.

So the stakes are high: if Richmond wins the eminent domain battle, cities across the country could use the tactic to rescue underwater mortgages, and the families that would otherwise lose their homes, swinging the balance of power from Wall Street toward cities.

Score one for Richmond, and zip for Wells Fargo, so far.

On Sept. 10, Richmond’s controversial plan for preventing home foreclosures using eminent domain was almost torpedoed at the Richmond City Council meeting, where its members waged a nasty fight before more than 300 attendees.

Advocates for city intervention against the banks won when the council voted 5-2 against a resolution to rescind the city’s offer to purchase 624 underwater mortgages and halt any effort by the city to seize those mortgages through eminent domain.

Vice Mayor Courtland “Corky” Boozé and Councilmember Nathaniel Bates sponsored the resolution attacking the plan, and cast the only votes in its favor.

Boozé and Bates said the city risks bankruptcy if Well Fargo wins its lawsuit, putting Richmond’s financial solvency on the line, but their colleagues were dubious.

“My vote is not supposed to be if (Wall Street investors) are a bunch of jerks and I want to stick it to them,” Councilmember Jim Rogers said to the audience.

After the city laid off a third of the government’s workforce in lean economic years, Rogers has reason to worry. City Manager Bill Lindsay laid out the risks for those in the auditorium.

Because no city has ever tried this before, he said, no liability insurance exists for this kind of work, which MRP has acknowledged. “If you believe the potential loss (of a lawsuit) is catastrophic, it’s important to acknowledge that’s an issue,” he said.

He also said it was tough for the city go it alone as a single entity, explaining the need for a joint powers authority, which would build a coalition of cities against Wells Fargo and other litigants.

State law requires a supermajority of the council, five members, to back any eminent domain action and only at the time that it would take place, he said.

Hours of back and forth passed between the city manager and Boozé who, after some arguing, asked the audience in frustration, “Are 110,000 people worth fighting Wall Street for?”

The ideological split of the audience was clear: Eminent domain supporters wore yellow shirts with a logo of the activist group Alliance of Californians for Community Empowerment, and those against wore red shirts branded “Stop Investor Greed.”

Those sporting the red shirts were mostly from the real estate industry, and in public comment they generally expressed that if someone were to lose their home, well, “so what?”

Lisa Johnson, clad in red, said, “My house is an investment, not a right.”

A representative from Richmond’s Council of Industries asked the mayor to reconsider the eminent domain plan, and to rescind the initiative.

Jerry Feagley, whose Feagley Realtors has sold homes since 1966, said the plan risks damaging all of Richmond’s ability to get credit. He was a seemingly mild-mannered man who is exactly who you’d picture if you think of a businessman from the ’50s, gray suit and all. “If this would go into effect, this would change loans in the entire country,” he said, passionately.

“I was at the March on Washington with Martin Luther King 50 years ago. Yes, I’m that old,” said one woman. She was bent over with age but spoke with volume. “That’s exactly what we have to do. We’re going to have to meet power with power and challenge the status quo.”

More than 50 supporters spoke at the podium. The meeting started at 7pm, and stretched on well past 1am. If there was one central theme to their sentiments, it was this: Richmond has hit rock bottom, and now is the time to fight back.

Councilmember Tom Butt put it in plain terms. “What we’re voting for is a giant game of chicken, and it’s clear two of my colleagues have blinked,” he said, referring to Boozé and Bates. “I’m not blinking.”

The council voted, and amid the turmoil and arguing and anger, the Boozé and Bates measure was rejected.

Having already lost once that night, Bates did not fare well when time came to vote on forming a joint powers authority. El Monte may be the first to join, McLaughlin said, which would help homeowners in need who are often people of color. Bates countered that McLaughlin should look out for “her people” and not try to use “his people” as a front for her legislation. “You don’t speak for my community,” he said, referring to African Americans. When another black council member, Jovanka Beckles, spoke up to thank her “white brothers and sisters” for joining in a fight for justice, Bates was uncompromising. “You are not African American,” he told her. Boozé also had words for the other dissenting African American Councilmember Jael Myrick. “One day you’ll have to stand up and be black,” he said. McLaughlin’s measure then passed 4-3, with council members Boozé, Bates and Rogers dissenting. The last remaining supporters waved their yellow flags and the dwindling crowd clad in yellow shirts left victorious, for now.