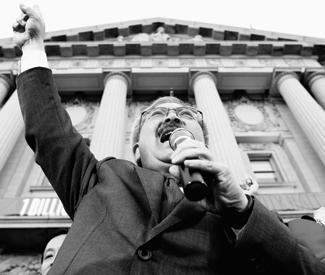 Mayor Ed Lee yesterday answered a series of five questions from the Board of Supervisors about CleanPowerSF, the renewable energy program it approved last year on a veto-proof 8-3 vote, but which three of Lee’s appointees on the San Francisco Public Utilities Commission are now blocking.

Lee reaffirmed his opposition to the program and support for the three commissioners who are refusing to approve a maximum rate for the program, while making a series of statements that were misleading, contradictory, and, according to Sup. John Avalos, some outright falsehoods.

CleanPowerSF would group tens of thousands of city residents into a renewable energy buying pool, a system called Community Choice Aggregation authorized by state legislation, which would compete against Pacific Gas & Electric’s illegal local monopoly. Initally, the energy would be purchased under a contract with Shell Energy, but the main goal of the program is to build city-owned renewable energy facilities by issuing revenue bonds supported by the program’s ratepayers.

“I know that many members of the Board of Supervisors are upset,” Lee began in his first answer to similar questions posed by Sups. Eric Mar, David Chiu, London Breed, David Campos, and John Avalos, who all represent the odd-numbered districts whose turn it was to submit questions to the mayor for this month’s appearance.

Lee then explained that one of the duties of  the SFPUC is to protect ratepayers, which he called “the overriding concern they have when faced with any issue,” adding that, “The commission ultimately decided that the rate wasn’t a fair rate.”

Ironically, the top rate that the commission is being asked to approve in order to finally launch CleanPowerSF was just 11.5 cents per kilowatt-hour, only slightly more than current PG&E rates and a substantial reduction from the rate that was discussed last year when supervisors approved the program.

PG&E, Lee, and other critics of the program had attacked its high cost, so SFPUC staffers tweaked the program to allow the initial use of Renewable Energy Credits, which support the creation of renewable energy projects, rather than being purely juice directly from solar, wind, and other renewable sources, which is more expensive.

So Lee criticized that change as a departure from what the board approved last year, telling the supervisors that the program should be at least “95 percent renewable on day one,” saying that, “This is what a green power program should look like.”

Yet when it did look like that, Lee opposed it, something he didn’t mention yesterday. And yet he still made the argument that the SFPUC was simply exercising its fiduciary responsibility in blocking a program that has gotten cheaper than when the board approved it.

“The San Francisco Public Utilities Commission did its job in protecting ratepayers,” Lee said. “I agree with the majority of the PUC.”

So, on one hand, Lee said that CleanPowerSF has “gotten progressively more expensive as time goes on,” citing statements made years ago about the goal of trying to meet-or-beat PG&E’s rates, which have been subsidized by taxpayers over the years.

And when the program then got close to matching those rates, he criticized the use of RECs to get there, saying the climate change benefits “need to be real and tangible and not based on vague promises.”

Yet even city-commissioned studies have shown that San Francisco won’t meet its own greenhouse gas reduction goals without substantially changing the energy portfolio of city residents, and CleanPowerSF is the only plan on the table to get there, except for PG&E’s vague promises to offer more renewable energy in the future.

While Lee touted city efforts to improve the energy efficiency of commercial buildings and the recent launch of a regional bike share program — neither of which will come close to meeting city climate change goals — even he acknowledged the “need to expand our in-city renewable energy generation,” citing the $4 million SolarSF as an example.

But Lee never made reference to CleanPowerSF’s plan to build up to $1 billion in renewable energy projects whose impacts would be far more impactful. Instead, he said the program “creates no local jobs,” which wouldn’t be true during the buildout phase.

While praising PG&E, Lee also glossed over the fact that a majority of supervisors still support CleanPowerSF, and that the SFPUC vote was supposed to be on the rate and not these ancillary issues, raising fundamental democratic issues when three mayoral appointees can override the decision of elected supervisors who represent all city residents.

“When a final project is so vastly different than the original intent, the San Francisco Public Utilities Commission has to intervene,” Lee said.

Avalos called many of Lee’s statements “lies,” so I followed Mayor Lee back to his office after the hearing and we had the following conversation as several reporters from other media outlets listened in:

Mayor Lee: Well, you know, I know that elements of this are somewhat complicated cause you have to actually read a lot of volumes of materials to understand the choice aggregation program, cause it has those three aspects and I would….

SFBG: As guidelines, not as rates….

Mayor Lee: I would point to those numbers that were discussed at the board and presented to the [SF] Public Utilities Commission, because that’s what I’m quoting from. I’m taking it, not from even verbiage, I’m taking it exactly from facts that were presented at the commission at the Board of Supervisors and I specifically lifted quotes from the board about their comments about local jobs and all the other things, so, I don’t think I’m inaccurate at all. I think I’m actually quite on point.

Mayor Lee: The rates were up and they came down in trade off with less green.

Mayor Lee: That’s about the point I was trying to make is that we wanted these other goals to happen and they couldn’t happen cause people were trading off things in order to set the rates and that was going to become a bigger and bigger gap as to what the original goals were. That’s the way…

SFBG: But the board clearly wants this program. Why, as a matter of policy, as a matter of city procedure, why isn’t the elected body the one to make this decision, instead of your appointees?

Mayor Lee: Well, I think that’s the whole reason why they presented it to the Public Utilities Commission. They’re charter mandated to set these rates. It’s not just an automatic acceptance of what the board says. They also independently review what the board has said. And in their independent review, they said they had gone well beyond what they stated their goals were and so they couldn’t set the rates and still honor all the goals that the board was suggesting.

SFBG: But those rates are less than what the Board has approved. How can they be exercising fiscal oversight… I mean, it doesn’t make any sense.

Mayor Lee: I think we have a big disagreement there. They’re mandated by the charter to set those rates responsibly, not just to follow what the board has stated and so, in their independent review, they went and reviewed all the goals that the board has said and said ‘This is not the program that they have stated should be fulfilled.’

SFBG: Even though the majority of the Board of Supervisors disagree with that statement that you just made?

Mayor Lee: Well, you know, then again, are we not respecting peoples’ right to disagree over what is being done here?

SFBG: But your argument that the program changed from what they approved, a  majority is saying ‘that’s not true,’ that you’re misrepresenting that.

Mayor Lee: No, I don’t think that I’m misrepresenting that. I disagree with that.

SFBG: A majority of the Board of Supervisors who approved it says you are.

Mayor: Well, I disagree with that assessment.