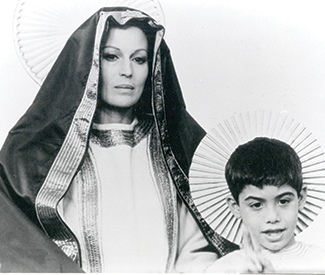 FILM It still boggles the mind that perhaps the most important single figure in the socio-religiously conservative Italy’s artistic media of the 1960s through the mid-’70s — an extraordinarily fertile period, particularly for cinema — was an openly queer Marxist atheist and relentless church critic. Pier Paolo Pasolini stirred innumerable controversies during his life, ending prematurely in his alleged 1975 murder by a teenage hustler. (Conspiracy theories still swirl around its actually being a political or organized-crime assassination.)

Pasolini’s film work has a lingering rep as being somewhat rough sledding, in both themes and technique. Certainly he was no extravagant cinematic stylist on the level of Antonioni, Visconti, Fellini, and Bertolucci (though he contributed as a writer to films by the latter two), the other leading Italian auteurs of the time. But it’s surprising how pleasurable on many levels his features look today, as showcased in a traveling retrospective getting its Bay Area exposure at the Castro Theatre, Roxie Theater, and Berkeley’s Pacific Film Archive through Oct. 31.

The two San Francisco dates highlight the three periods of Pasolini’s cinema; the PFA’s more extensive survey (ending with 1975’s Salò, or the 120 Days of Sodom for Halloween, the kind of programmatic coup de grace that leaves you suspended between “genius!” and “WTF?”) running weeks longer. While there are overlaps, the latter provides berth for his neorealist classic feature debut Accatone (1961), shorts, and several documentaries including 1964’s seldom-revived Love Meetings, in which PPP himself interviews Italians about their sexual attitudes — from asking not-so-young kids how babies are born (“the stork brings them”) to grilling adults about gender double-standards regarding marital virginity. Then there’s 1969’s bizarre Pigsty, which put leading 1960s Euro-art-cine weirdos Pierre Clémenti and Jean-Pierre Léaud in separate threads of a two-pronged experimental narrative. It was weird enough to forgo US release until 1974.

There are also such baffling, shit-stirring features as Hawks and Sparrows (1966), an existential comedy suspended between Beckett and A Hard Day’s Night (1964); plus 1968 shocker Teorema, in which Terence Stamp’s mysterious bisexual visitor liberates and destroys a repressed bourgeoisie Italian family.

This weekend’s Castro-Roxie showcases the extent to which Pasolini was a cinematic populist — however inadvertently for such a radical thinker. His “trilogy of life” brought to the screen bawdy medieval stories by Boccaccio (1971’s The Decameron), Chaucer (1972’s Canterbury Tales) and unknown legend scribers (1974’s Arabian Nights.) All were originally rated X. The first is a bawdy delight; the last is a gorgeously melancholic, serpentine lineup of seriocomic stories-within-stories. Canterbury is a mixed bag, as Pasolini had problems structuring it editorially and was despondent over longtime protégé and lover Ninetto Davoli — who was 15 when they first met — leaving him for a woman. Nonetheless, he gave Davoli a big part in the wonderful Nights, albeit one in which his hapless character is finally castrated by angry women. (Touché.)

With their unprecedented amounts of full nudity, offering up sexuality (and normal, imperfect bodies) as something simply natural rather than prurient, each portion of this “phallocentric” trio was instantly notorious. The films became his greatest commercial successes — though curiously he later abjured them, partly out of guilt that so many actors’ “innocent bodies [had] been violated, manipulated, and enslaved by consumerist power.” Who but Pasolini would be depressed by having hits?

That shift from comparative joie de vivre back to bleak commentary on social injustice resulted in unintended swansong Salò, a grueling depiction of classist sadism that usefully transfers the Marquis de Sade’s infamous Bastille-written 1785 120 Days of Sodom to the bitter end of Italy’s World War II-losing fascist era. While in the literary original aristocratic children were kidnapped to be abused by decadent church and secular power mongers, here it’s pointedly spawn of the anti-fascist peasant underclass (all actors assuredly 18-or-plus to avoid prosecution).

The characters forced into ever-escalating sexual and violent degradations to survive, no mercy is spared. Salò remains banned in several countries, notably Asian and Middle Eastern ones. Its largely naked, helpless “young victim” cast (who apparently thoroughly enjoyed the filming, having no idea just how fucked up the material was) proved Pasolini’s last instance of drafting nonprofessionals who struck his eye. As a showcase for such raw talent, it was second only to a film he’d made a decade earlier: 1964’s The Gospel According to St. Matthew, a gritty, black-and-white riposte to the garish CinemaScope Biblical epics of the era. Ironically, that film by a Commie atheist fag remains one of the cinematic depictions of Christ most highly regarded by believers.

Nearly all these movies featured his favorite discoveries Davoli and Franco Citti, the former an endearing comic goofball, the latter a smoldering hunk usually cast as amoral evildoer. Both enjoyed long careers after their mentor died. Their very different types of screen charisma remain high among the delights that Pasolini’s cinema offers today. Davoli will be on hand at the Castro and Roxie screenings. Given his guileless, antic persona in the films, it’s a fair bet he’ll be a riot in person. *