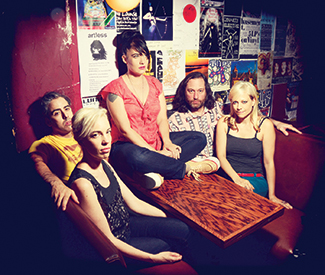 TOFU AND WHISKEY Before Le Tigre but after the demise of Bikini Kill, Kathleen Hanna created a mystical lo-fi electropop solo project called Julie Ruin. It was a difficult time for the riot grrrl icon; having recently flown the Pacific Northwest coop for Brooklyn, she let the ache out in song.

A dancey new wave record bursting with head-bopping beats, lightning bolt electric guitars, and empowering lyrics, it’s set to be another chant-along feminist anthem album. But it’s a small miracle Run Fast was even made. Before she returned to music, Hanna was laid up with a then-mysterious illness for half a decade and this was her first effort back.

In the midst of a massive media blitz, including a live appearance on Late Night with Jimmy Fallon last week, Hanna and I discussed the Julie Ruin’s new record, struggles with neurological Lyme disease, why Photoshop is better than beer, and her young spirit sister, Tavi Gevinson, feminist teen editor of Rookie Magazine:

SF Bay Guardian Why did you decide to return to an earlier project, but with an entirely new band?

Kathleen Hanna I guess because I was starting from a similar place. I was coming up with loops and melodies and instead of just working on them myself, I brought them to the band and expanded on them. When I listen back to the Julie Ruin solo record, I hear kind of demos more than a fully finished record — which I think is great, and I’m proud of that record — but I was like “what if I start with the same idea but it was totally fleshed out?” So musically that was a big part of the project from me.

Also a big part of the project for me was starting from the same emotional place, of, you know, I was leaving Bikini Kill when I did the Julie Ruin solo project and that was a really big change in my life. And then I’m having this other really big change in my life, which is that I haven’t really made music for [nearly] 10 years. And instead of isolating and making this very private thing in my apartment by myself and feeling like I had to go it all alone, I reached out to my friends and said, “Hey, will you help me?” And luckily they said yes.

SFBG What was it like picking up instruments and working on music again after such a long hiatus?

KH It was great [and] it was weird! It was immediate chemistry with my bandmates. It felt like I was getting back to my old self.

I’d been sick for many years and my illness and kind of taken me out of things. I started doing a lot of archival stuff behind the scenes, but I hadn’t played music. It’s funny that I chose to do it when I was really, really sick but part of the reason was I needed some kind of hope to go on. And I didn’t know if we would record or tour or any of that. I just told them, “I want to play music, do you guys want to meet once a week and see how that goes?”

But a lot of times we couldn’t even meet, because I’d be sick. So it was a very slow process. But when I felt well enough to get to rehearsal I would forget I was sick, I would forget any pain I was in, I would forget I was fatigued. It would all come back to me. It was really important in my recovery process because you become all about the illness, especially an illness like Lyme disease, where there’s so much work you have to do to stay well or to get well, constant pills and IVs and specialist appointments.

I saw footage of Bikini Kill in the movie The Punk Singer that was being made about me, and I felt like I was light years away from that. I could barely walk up the stairs. And then I would write a song with my new band and feel like, “I still am that person.”

SFBG Did battling this disease directly inform any of the tracks on Run Fast?

KH I have a form of Lyme disease that affects my brain, neurological Lyme disease, so during a lot of the record I was having a hard time with language, so I would often say the wrong word. So when I was writing lyrics, I sort of just let that go, I didn’t try to go back, it was so much more stream-of-consciousness than I’ve [ever done]. I was like, why does it have to be a total narrative for every song? Why can’t it be abstract?

There are parts of the record where I just go “blah blah blah!” I would go back and fix that when I was feeling better but people would say to put it back in. It sounds alive, it sounds like you. I let that go.

SFBG How collaborative was the songwriting process for the album?

KH In the very beginning when we were writing I would bring in little loops I had made with me singing over it. And I’d be like, “oh, I really like this melody for a verse.” And then they would be like, let’s have that be the starting point. They really wrote all the music and I wrote the lyrics except for [keyboardist] Kenny [Mellman]’s song, “South Coast Plaza.”

SFBG Where did the album art [of a hot pink stuffed creature] come from, and what is it referencing?

KH That cover was made by artist Allyson Mitchell. I went to an art show and saw some of her pieces…[The creature on the cover] is a “familiar” — you know how a witch has a “familiar?” It’s from a large project called Ladies Sasquatch, of these huge, 10-foot-tall lesbian sasquatches and then each of them has a familiar, like a tiny doll, that goes with it, and that’s what’s on the cover.

SFBG It brought up to me the importance of album covers. People don’t seem to care about cover art as much anymore, but it is something that has always come up in your back catalogue. [Ed. note — I resisted the urge here to tell her I have one of her album covers tattooed on my upper arm]

KH If I haven’t made the actual album cover myself…I’ve been very instrumental. I made all the Bikini Kill covers beside the very last one. I did all the drawings and graphics for the zines. I’ve always been really involved. They’re really important to me because I started as a visual artist, and I’m addicted to Photoshop. Like, instead of going to a bar and drinking beer, I sit at home with Photoshop. If I would’ve had Photoshop in the ’90s, I would have been a total crazy person.

But I think it’s really important to set the tone of the record. There’s something really fun and upbeat about [Run Fast] but then there’s something really sinister lurking behind it, maybe it’s my illness, the fact that Kenny writes a really happy-sounding song about euthanasia, “Party City” is about me confronting death, so it really made sense that we picked this kind of adorable yet creepy character for the cover of the record.

SFBG How did you meet teenage editor Tavi Gevinson, and later end up playing a party for her online magazine, Rookie?

KH I sent her this sweater that someone made for me that said “Feminist” on it. It shrank and I was like, “I don’t know anybody tiny enough to fit in this!” I heard about her before Rookie — I sent it to her and she wore it in stuff [for her previous blog, Style Rookie]. So it was this mutual admiration society. People were giving her shit at the time so I reached out to her. You know, she’s a kid. And she’s doing this amazing work. I just think it’s so important that young people take over culture and create their own. She’s really smart and she really wants to be inclusive.

Playing [Rookie’s] party was like a dream come true. It was kind of our first show and it was only for like, 100 kids at this weird outdoor area in a mall. It was one of the weirdest first shows a band can have.