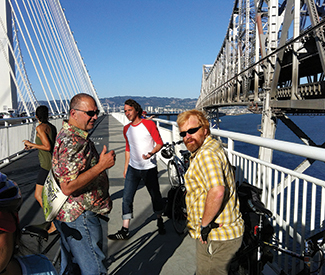 Pedaling onto the Bay Bridge over the weekend, I was suspended between our industrial past and sleek present. But my ride into the future was abruptly stopped just before I reached the island.

All the experts say we should all just be happy with the world’s longest bike and pedestrian pier, and it certainly is a wondrous thing to behold, this spacious and beautiful two-mile path that pasted big grins on the dozens of faces that I rode past on its sunny first Friday in operation.

But just as the duality of riding between the old Bay Bridge and the new invoked myriad metaphors, so too did the fact that my fellow taxpayers and I just spent $6.4 billion on a bridge from Oakland to San Francisco built almost exclusively for the private automobile.

Is this the future we’ve embraced? Are global warming, economic equity, and collective responsibility such distant abstractions that we can fill this beautiful new bridge with people sitting alone in expensive, deadly, polluting, space-hogging machines?

I looked into their work-weary eyes as I rode my bicycle out from Oakland with a few of my friends during rush hour, on a path wide enough to facilitate conversations among a pair of cyclists in each direction and strolling pedestrians, six abreast. It was lovely, like we had finally arrived in the civilized, people-powered present that we Guardianistas have been working toward for decades.

And then it ended, a vivid reminder that we’re not there yet.

The past is blocking our progress, literally and metaphorically, at least for now.

The old Bay Bridge stands between the stubbed-off end of the new bike/pedestrian path and its intended touchdown spot on natural Yerba Buena Island, the conjoined twin of the artificial Treasure Island, where developers dream of building high-rise condo towers buffered against the rising sea.

Officials tell the Guardian that the path will likely be completed in early 2015, after the old bridge comes down. Then, we’ll be able to ride our bikes onto the island and cruise our way to the west side, with its beautiful views of our beloved city, San Francisco, shimmering just out of reach.

Next month, the Metropolitan Transportation Commission will release its latest study of how to complete the ride/walk, examining the placement of pathways balanced on either side of the Bay Bridge’s western span, their added weight compensated for with lighter decks for the cars, all at a cost approaching a billion bucks, with a capital B.

“Everything about this is going to be hard,” MTC spokesperson John Goodwin told me when I asked about allowing cyclists and pedestrians onto the Bay Bridge’s western span, citing an array of engineering, financial, and political obstacles.

“It’s a 10-year project even if a local billionaire decides to put up the money,” Goodwin said, noting that there is no public funding identified for the project except for maybe raising automobile tolls again, which would be a tough sell to voters for a bike and pedestrian project. “It’s an uphill climb and I’m not sure it will ever reach its intended goal.”

But completing this journey is really only as difficult as we make it. Just ask local activist/author Chris Carlsson, who says that he and some of his buddies could fix the problem in a day for a few thousand dollars. All we need to do it take the righthand lane, install some barriers, done.

“The bridge is more malleable than people treat it as and we need to have this discussion publicly,” Carlsson, a founder of Critical Mass and author of Nowtopia, told us. “Let’s solve this problem today. The idea that they would open this bridge without completing this path is insulting.”

To Carlsson and others of his radical ilk, this is an equity issue, and the opening of a car-only bridge is symbolic of our societal myopia. To believers in the automotive status quo, the idea of giving up one of five traffic lanes for the final, two-mile-long descent into San Francisco makes their heads explode.

“That’s just wildly unrealistic,” Goodwin said of Carlsson’s idea, even instituted on a temporary basis, noting that the Bay Bridge handles more than 270,000 cars per day, by far the busiest state-run bridge in California.

To many modern minds, automobiles are essential to our personal freedom and economic vitality — bikes are toys, public transit is for the poor, walking is what you do in your neighborhood or on the treadmill at the gym — but San Francisco is a voter-approved “transit-first” city that supposedly gives each of these modes priority over cars.

“The idea that the five lanes of automobile traffic is inviolable is ridiculous,” Carlsson said, calling it a relic from the days before the freeway revolts of the 1950s and ’60s, when San Franciscans rejected the conception of The City as just another stop along the fast and efficient interstate highway system.

In fact, it was that cars-first vision — before it was rejected by a populist revolt — that helped lead officials to remove the passenger trains that operated on the lower decks of this New Deal/WPA bridge for its first 17 years of life, turning the whole Bay Bridge over to cars, trucks, and the occasional bus.

The era of unfettered automobility had begun, and the idea that capitalism/industrialism and the health of our world might someday, somehow come into conflict with one another also seemed wildly unrealistic.

The Bay Bridge was my bridge growing up in the East Bay, our link to the big city that I traversed while safely cocooned in the backseat of my parents’ car, windows up, car filled with what we’d later call secondhand smoke, buffered against the wilds of West Oakland as we launched over the bay.

Today, my perspective has changed and so has my access through the old industrial waterfront, which has been opened up to all by a pair of new paths leading bikers and hikers to the bridge, both short rides from the West Oakland BART station.

One starts on Maritime Street, near the Port of Oakland and the remnants of the old railyard on what the Realtors have started calling Oakland Point; the other starts on Shellmound Street right across from Ikea, best accessed from West Oakland along 40th Street, where crews were in the process of placing tall cones to protect the bike lane as we rode past.

After the trails merge, it proceeds past the yards for the government agencies set up to serve the motoring public: CalTrans and its freeway maintenance facilities, and the California Highway Patrol, which has doubled its local bicycle brigade (which had worked just the Golden Gate Bridge) to police the new path.

“Best job in the world,” a smiling Officer Sean Wilkenfeld told me as he arrived at the end of the Bay Bridge path, where a couple dozen people stood watching the new Bay Bridge and the old, which took on a ghostly feel as we hovered next to its newfound lifelessness.

Personally, I really like the new Bay Bridge, with its elegant modern architecture and unobstructed bay views. But some of the friends and strangers that I chatted up there at the end of the line disagreed, singing the praises of the old, industrial, seismically unsound original.

“The new bridge is beautiful, but in some ways I like the old bridge better because you can see its functionality,” Joel Fajans, a physics professor at UC Berkeley, told me.

Conversation among the cyclists turned to our beautiful new path and its untimely end. “What a dream come true to have a bike path on the Bay Bridge. I already wrote to my representatives about completing the route to San Francisco,” said Kurt Vogler, a 47-year-old environmental consultant from Oakland who rode the bridge with Fajans.

That was the phrase that everyone used, this notion of completion, conveying the sense that we’re somehow stuck between where we were and where we should be, suspended between the old and the new, waiting to catch up.

“I think it’s beautiful. It’s an engineering marvel, a miracle,” Garris Shipon, a engineer from Berkeley, said halfway through his bike ride on the Bay Bridge. “I’m glad they launched with a bike path at all, and I hope they finish it because I’d love to ride all the way across.”

The San Francisco-Oakland Bay and Golden Gate bridges were built at the same time, started in 1933. But the Bay Bridge — the industrial, utilitarian bridge connecting The City to its biggest, most diverse nearby population centers — was done first. The tall, pretty one — with its Art Deco flourishes and tourist appeal — took longer.

On its opening day, the Golden Gate Bridge was filled with pedestrians, while the Bay Bridge hosted its first traffic jam as it was unveiled, “with every auto owner in the Bay Region, seemingly, trying to crowd his machine onto the great bridge,” the San Francisco Chronicle reported.

It’s been the same story ever since, with cyclists and walkers crowding onto the Golden Gate daily, salty winds howling through their hair, while travelers on the Bay are caged behind steel and glass.

But not anymore. In fact, it’s far more pleasant to ride on the Bay than the Golden Gate, where the bike path is narrow and cluttered. Now, it’s the golden one that seems to belong to another age, with the Bay Bridge designed to be personally experienced.

“It’s really a spectacular excursion,” Renee Rivera, executive director of the East Bay Bicycle Coalition, told me. “I was taken by surprise by what fun it is to be on a bike on that bridge.”

But the stirring sensation of riding or walking the Bay Bridge only accentuates its main shortcoming; at least the noisy, harrowing Golden Gate Bridge goes all the way across.

“We just spent $6 billion on that,” Fajans said, gesturing to the new Bay Bridge, “and you’re saying we can’t spend a little more to complete the bike lane? That’s not fair.”

Goodwin and others say that motorists paid for the new Bay Bridge with their tolls, but Fajans calls bullshit, noting that BART passengers pay more than drivers for a round trip across the bay without buying exclusive access in the future.

In this age of austerity, with government funding for transportation projects drying up and people reluctant to raise their own tolls or taxes, it’s hard to do what’s needed. That’s one reason cycling advocates take what they can get, such as an expensive western span proposal with one of two paths reserved for maintenance vehicles to smooth the automotive flow.

“If we have to sell it to the public to increase tolls, we’ll have to show that it benefits everyone,” Rivera said.

Completing this path, somehow, is a top priority for the cyclists.

“It was a little tough to get people’s attention on the western span for the last couple years, but now is the time,” Leah Shahum, executive director of the San Francisco Bicycle Coalition, told us.

“Like Chris, we feel strongly about equity on the bridge,” Rivera said. “At the same time, it needs to function smoothly as a bridge and I would be concerned about it bottlenecking at Treasure Island.”

Carlsson rejects the neoliberal approach of begging for scraps as we ride into a future that simply can’t continue to be dominated by automobiles. He says the Bay Pier must not rest there for another decade.

“Both bike coalitions have a resistance to appearing anti-car,” Carlsson says, “so they aren’t willing to say the obvious thing.”