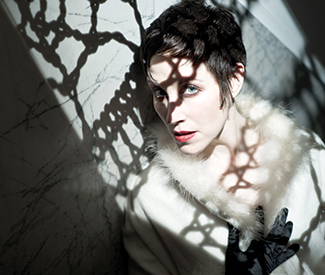 MUSIC Though San Francisco musician Jill Tracy is deeply fond of the macabre, “gloomy” is not an accurate word to describe her personality. The day I speak to her, she’s in exceptionally high spirits, having just wrapped up a hugely successful Kickstarter campaign.

“It’s really special to feel like it’s a big group effort,” she says. The funds will help complete a pair of videos lensed by Jeremy Carr, who directed Tracy in the 2006 thriller Ice Cream Ants. Appropriately, key scenes were filmed on a spooky night in Red Hook, Brooklyn — former ‘hood of horror author H.P. Lovecraft.

“[Carr] wanted to shoot me walking through these mysterious alleyways, but there was this sudden, intense thunderstorm. Hail coming down the size of golf balls, flooding — it was so dangerous it was like, how are we gonna do this?” she recalls. “But the universe intervened, and the rain finally tapered off. And it was so gorgeous, because there was still lightning in the sky. A lot of that will be kept in the video.”

Also caught on tape was intervention of another kind. “At one point there was this glowing amber light swirling around. I look over — and it was the cops, wondering what we were up to,” she says. “They were really nice and let us keep going, and it turned out that they were responsible for the most beautiful shot.”

Happy accidents, strange coincidences, unexplained phenomena: These are all things the composer-singer-pianist welcomes with delight. Her distinctive sound — she’s often described as a “neo-cabaret artist” — sparked a recent twist of fate, when Showtime contacted her about using a song to promote the final season of Dexter.

“That came out of the blue,” she says. “They said, ‘We think that your music would be perfect for this.’ That’s when being an independent musician is a great thing — because I own my song and my publishing. They just have to contact me and I can give permission [to use it].”

She continues. “I didn’t know what they were going to do with the song. I was so excited — are they just gonna use five seconds of it? But it ended up that it’s almost like a music video. I sing, ‘I’ll tie you up,’ and you see [star] Michael C. Hall tying up a body! I was really thrilled with what they did.”

It’s a testament to Tracy’s unique style that the Dexter song, “Evil Night Together,” dates back to her 1999 sophomore album, Diabolical Streak. (Her diverse discography also includes 2002’s Into the Land of Phantoms, a score for 1922 silent film Nosferatu; and last year’s holiday-themed Silver Smoke, Star of Night.)

“I strive for timelessness in my music,” Tracy says, noting that the Dexter exposure made some listeners assume that “Night” was a brand-new song. “It meant a lot to me because that’s [my intention], that it could be played at any time and still sound unique.”

Without trends to guide her, Tracy has sought inspiration elsewhere. After years of incorporating on-the-spot compositions (she calls it “spontaneous musical combustion”) into her live shows, she had an idea: why not test the vibes at a more off-kilter venue? At one memorable gig, both performer and audience experienced something … extraordinary.

“I was in Victoria, BC at Craigdarroch Castle, which is supposedly haunted,” she says. “At one point, someone in the audience is like, ‘Look at that lamp!’ And this old, brocade-shaded lamp had just started to flicker. So who knows! Strange things will happen like that.”

Tracy’s repertoire also includes “musical séances,” in which audience members bring in objects of personal significance to help her channel music. Along with violinist Paul Mercer, she hosted one such event earlier this year in Los Angeles, “at the mansion of a murderer from the 19th century.” (Clearly, she ain’t no fraidy-cat.) She’s hosted similar events at the Conservatory of Flowers in Golden Gate Park.

“We did a beautiful night tour of the Conservatory, followed by a performance,” she says. “People bring these items — we’ve had everything from cremated remains, to antlers, to a toothbrush. Swords! Haunted portraits! It’s almost like Antiques Roadshow for the netherworld. But the one thing I’ve learned through all of this is that every object, every place, and every person has a story to tell that will break your heart.”

Some of her most memorable tales come courtesy of the Mütter Museum, a medical-oddities collection that’s part of the College of Physicians of Philadelphia. She’s the first musician to receive a grant to compose inside the museum.

“This whole project is, like, the total goth girl dream come true,” Tracy laughs. “I was able to spend nights alone in the museum, writing music among the collection, and I just fell in love with the place. You look around, and you see all these skeletons and specimens in jars, but you don’t realize at first that these were all lives — brave souls who endured these rare afflictions, many of which you never see today. I was so moved, and I wanted to know their stories.”

Not only did the museum allow Tracy overnight access, it also let her do research in its library. She hopes to to spend the next year transforming her Mütter encounters — with subjects like conjoined twins Chang and Eng, and “Ossified Man” Harry Eastlack — into an album as well as an accompanying storybook. “It will probably be the biggest project that I’ve done to date,” she says. “It’s been almost like an excavation, digging into this information and creating pieces to honor these individuals. I want to give emotional context to the people in the collection.”

With all of her site-specific events and ongoing endeavors — in brief: a perfume line; a 7-inch split with Blixa Bargeld based on the writings of a 19th century Polish occultist; a set at Sat/7’s “ManulFest” benefit for wild cats held at a temple in Geyserville; a speaking engagement at LA’s Death Salon later this fall — it’s advisable for SF fans to hit up Café du Nord for what’s becoming an increasingly rare rock-club gig.

“I’m doing fewer shows at places like the du Nord, because I want to do more of a theatrical performance,” she says. “Today, my work is all about honoring the mystery, the beauty, and the romance of the dark side. I strive to transport people into what I refer to as ‘the elegant netherworld,’ and I find that music, that emotion, creates the portal for you to go there. Doing what I do, I feel like kind of a gatekeeper to this other place.”

With This Way to Egress and Vagabondage