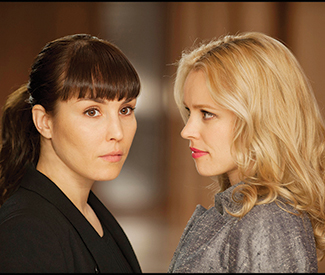 FILM Despite its intensely collaborative, top-heavy, organizationally complex nature, commercial filmmaking can still be primarily instinctual rather than thoughtful, let alone intellectual. This is not necessarily a good thing. We’re accustomed to displays of corporate group-thinking or sheer willful, proud stupidity (hiya, Michael Bay!) in mainstream movies today. But those are exercises of market conformism, whether the makers recognize them as such or not. What about populist filmmakers who go their own way yet grow increasingly dumb and dumber? Should we applaud their auteurist individuality even as all artfulness, taste, and entertainment value rushes toward the drain?

Of course we’re talking about Brian De Palma, who at age 73 should deserve more respect — if he hadn’t spent decades scuttling it so completely. His new movie is called Passion, and one doubts he thinks its lame third-generation lez-ploitation is any less of a passion project than he’s made in the past. That is so, so sad.

It’s important to remember that this guy once looked like a prince, as promising as Scorsese, through at least the mid-1970s: clever shorts, avant garde flirtations, exceptionally edgy, and inventive indie comedies (1968’s Greetings and 1970’s Hi, Mom!), guaranteed future cult classics (1974 rock musical Phantom of the Paradise), and tentative major-studio efforts that misfired yet were stylistically compelling (1972 absurdist Get to Know Your Rabbit, 1976 mystery thriller Obsession). Sisters (1973) — his first explicit Hitchcock homage — was a black-comedy horror knockout undervalued at the time because it was distributed by a minor studio (American International) that didn’t know how to sell it up-market.

Then came Carrie (1976), a brilliantly cast, shot, and scored improvement on Stephen King’s wobbly debut novel. It’s a succubus movie: no matter how many times you’ve seen it, you can’t watch the opening scenes without getting sucked into the whole thing. Its misanthropy could be excused as cunning satire, undercut by the empathy Sissy Spacek’s titular figure evoked. (De Palma never gave a leading female actor such sympathetic free rein before or since.) A commercial success nonetheless considered disappointing due to cheesy publicity better suited to a drive-in horror flick, Carrie boosted De Palma to the A list … where he wanked.

The Fury (1978), Dressed to Kill (1980), Body Double (1984), and Raising Cain (1992) reprised elements of Carrie and Hitchcock to guiltily-pleasurable but increasingly inane, sexist, baldly derivative ends. He was still capable of pulling off the odd big, splashy action picture — notably 1983’s Scarface and 1987’s The Untouchables, with Carlito’s Way (1993) and Mission: Impossible (1996) enjoyable if distant second-placers — while 1989’s Casualties of War was a decent stab at serious-issue cinema, dealing with Vietnam War atrocities.

But, argh: Bonfire of the Vanities (1990) turned Tom Wolfe’s easily-sussed satirical novel into a full-on embarrassment of overt Hollywood stupidity toward anything faintly literary or complex. After the brief, barely redeeming pause for OK style-over-substance exercise Snake Eyes (1998), De Palma delivered the monumentally dull Mission to Mars (2000), shuddersome old-man-salivating Femme Fatale (2002), starry-dreadful noir mystery The Black Dahlia (2006), and 2007’s Redacted — a fictionalized “found footage” reenactment of actual American war crimes that was one of the most inept and offensive movies ever made by a once-important US director. While similarly themed Casualties communicated just-enough horror at its similarly fact derived misdeeds, here De Palma appeared to take far too much pleasure in the loutishness of our soldiers abroad — not to mention their graphically depicted rape-murder of a teenage Iraqi girl.

I’ve left little space left to discuss Passion because it is so depressingly unworthy of discussion. Even at this late, dire point, the notion of DePalma directing a remake of Alain Corneau’s 2010 hit Love Crime suggested camp guilty pleasure at the very least. The original film was a clever if implausible psychological thriller in which a corporate boss (Kristin Scott Thomas) and junior-executive protegee (Ludivine Sagnier) come to fatal comeuppance blows over a particularly cruel abuse of power in the name of love (or heterosexual lust). It was a stereotypical girlfight par excellance, dressed up via reasonably smart treatment.

You’d expect De Palma to ramp up the lurid and tawdry-violent aspects to delightfully tasteless degrees. (Remember, this is the director whose refined sensibility once showcased a killer’s floor-perforating electrical drill thrusting phallically into Janet-Leigh-in-Psycho substitute Deborah Shelton in Body Double.)

But perhaps what’s most depressing about Passion is that the life has gone out even from his love of violence and sexploitation. It’s a tepid movie, and not even a stylish one. In contrast to Scott Thomas’ formidible strength through-negativity (amplified in the recent Only God Forgives), Rachel McAdams’ villain is just another yuppie princess with a snit fit in store. Sagnier might well be the Gallic answer to Chloe Sevigny, yet her waxy inexpressiveness is still better than another horribly awkward English language performance (see: last year’s Prometheus) by Swedish star Noomi Rapace.

Hilariously, De Palma has opined that Passion lacks his trademark excesses because he targeted it primarily toward female viewers who (market research says) dislike graphic sex or violence. As if most women would enjoy his use of primary female characters as bimbos, prostitutes, bitches, rape victims, backstabbers, and climbers … if toned down a bit.

Passion (which notably took a full year to secure any US release after a festival debut) commits a sin he’s seldom attained previously: it is just dull. It promises titillation. Yet real people and real sex are so plastic and cartooned here they seem the last call of an old-school playboy horndog who can’t get it up anymore. *