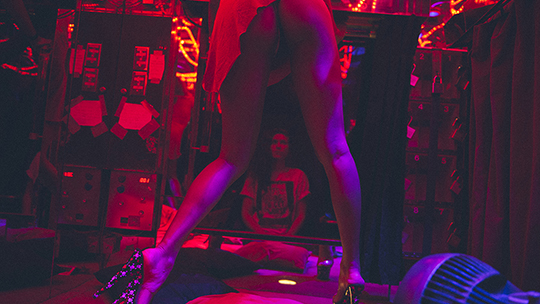 When we caught up with Prince$$, who has spent more than a decade at the Lusty Lady — not just as a dancer but in roles ranging from marketing guru to shop steward for the peep show’s unionized dancers — she wasn’t in her favorite over-the-knee platform boots or a classic burlesque getup.

Instead, her dyed-purple hair was tied back, and she was taking a moment to catch her breath between organizing a hasty archiving project, pulling together the Lusty’s final farewell bash, and absorbing the earth shattering news that the famed North Beach strip club would be closing its doors for good on Sept. 2 after a storied 37-year run in San Francisco.

What’s the difference between the Lusty Lady and any other strip club in the city? For one, it’s earned a political rep with its co-op ethos, feminist vibe, and array of dancers showcasing all shapes, sizes, colors, aesthetics, tattoos, and body piercings. It was even the subject of a 2000 documentary, Live Nude Girls Unite!, which chronicled the mid-1990s unionization effort.

“Without the Lusty, there’s no alternative, non-homogenized club,” says Prince$$, who never leaves home without fliers promoting the peep show and even carries around a Lusty Lady pen in her purse. “It would be like if every restaurant in San Francisco was shut down and all you got was TGI Friday’s. It’s like comparing Zeitgeist to Ruby Skye.”

With a dingier interior than its flashy counterparts, the Lusty is a place that might stage such events as a (sexy) May the Fourth Star Wars themed bash, a (sexy) Fleet Week celebration with pirates and singing mermaids, or a (sexy) Kiss-themed holiday blowout. This isn’t your black-tie, $50-cover, arrive-in-a-limo sort of establishment, observes Prince$$, who has also worked in other clubs and said she chose her name because “that was the silliest stripper name I could think of.”

A little over a year ago, she found herself shouldering the Lusty’s legacy after nearly everyone else split, because it looked like the peep show might be toast. “I was literally left holding a handful of keys. I was left just holding this thing. No one would take it, and I said, I will. It was my life for most of last year. You make a promise, and you keep it,” she added.

But the Lusty’s ship was already listing dangerously then, and now it has finally capsized. And of course it all comes down to money, honey. In an odd twist, the Lusty’s landlord, Roger Forbes, also happens to own every other strip club in San Francisco through his parent company, Déjà Vu Entertainment. That includes The Hustler Club, a strip joint sandwiched up against the iconic Lusty in the city’s red light district on Kearny and Broadway streets.

“For about 10 years now, the Lusty Lady has been paying twice market value for our property here,” explained Scott Farrell, who stepped in as a management consultant earlier this year in a last-ditch effort to help save the club, which he’d initially had an eye toward buying. “When I came into the picture, the rent was $16,500” per month for the 3,423 square foot nightclub, he explained. Yet he’d seen similar properties rent nearby for $8,400.

“I called him and said, ‘can we sit down and talk?'” Farrell recalled. “His words were: ‘I don’t care anymore. I just want you guys out.” Forbes could not be reached for comment.

You might call the loss of the Lusty another nail in the coffin for San Francisco’s famously freakish wild side, an element that feels thinner with each passing day.

“People have this vision, where they’re trying to turn San Francisco into a cross between Los Angeles and New York, and trying to make the clubs ‘pure,'” Prince$$ reflected. “We weren’t trying to be that. We were trying to be different.” Now faced with the end of an era, Prince$$ said she felt as if she’d just stepped off a rollercoaster. But she had one more task: preparation for the world’s only unionized worker-owned peep show co-op’s last lascivious hurrah on Sept. 1, the Lusty’s last night. From there, it will be a matter of sorting out the fate of the famed neon pink sign and other historic components after it’s all been dismantled. “Everyone is going to want to buy a piece,” she said, “and all the dancers are going to want to keep a piece.”