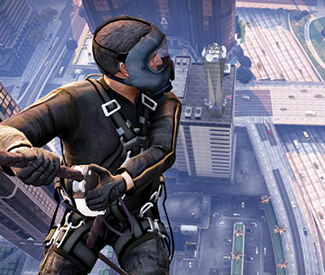 FALL ARTS As summer slips away for another year, our consolation prize is that we are about to witness one of the most jam-packed seasons gaming has ever seen. Not only are we welcoming two spiffy new game consoles for the first time in six years, but here are six games that prove those suddenly less-shiny systems you already have are not going quietly.

Before bidding summer a true farewell, we can enjoy a few releases that sneaked in at the tail end of August.

Saints Row IV  (Volition, Inc.; out now) is the best Saints game so far, marrying the gritty crime-sandbox foundation of its past with the incongruity of superpowers. As president of the United States, you’re tasked with entering the computer simulation of a small city to fight aliens with super-speed and telekinesis, as well as with novel alien weapons like the Inflato-ray, the Abduct-O-Matic, and the Dubstep Gun, which shoots actual rays of concentrated dubstep. It’s all very silly, but the series has found the sweet spot between funny and stupid and manages to remain there for the length of the game.

Similarly, The Bureau: XCOM Declassified (2K Marin; out now) seeks to join the strategy tactics of its past with the in-vogue third-person shooter — albeit with less successful results. Set in America of the 1960s, The Bureau is meant to divulge the humble beginnings of an alien-busting government organization known as the XCOM (Extraterrestrial Combat) unit. Unfortunately, the game’s publicly turbulent development is reflected in its rough-edged, bland shooter mechanics. Still, for franchise devotees there’s fun and horror in seeing the XCOM franchise try on a new hat.

Telltale Games’ The Walking Dead was undoubtedly last year’s breakout success. A zombie game more interested in the bits that didn’t involve mowing down hordes of the undead, the series of five short “episodes” forced players to make quick life-or-death decisions with no single correct answer. Season one made a good case for video games as a viable storytelling medium and, with The Walking Dead Season Two  slated for this fall (release date TBD), we’re about to find out if Telltale can make a nation of gamers cry twice.

You probably already knew there was a new Grand Theft Auto coming: it’s kind of a big deal. This year’s Grand Theft Auto V  (Rockstar North; Sept. 17) brings the series back to Los Santos, the faux-Los Angeles setting last seen in 2004’s Grand Theft Auto: San Andreas, and boasts a healthy three simultaneously playable protagonists (compared to most games’ paltry one). GTA V will no doubt give us beaucoup gunfights and explosions — but it’s the little diversions like deep-sea diving, tennis, yoga, shopping, and bike riding that make this one look special. Finally, a version of The Sims that involves committing felonies!

If one word could describe this generation of blockbuster gaming, it would likely be sequels. So it’s encouraging to see a pair of promising new titles offering diversions that haven’t been iterated upon a billion times before.

Beyond: Two Souls  (Quantic Dream; Oct. 8) is from the studio that brought you Heavy Rain, the ultra-cinematic choose-your-own adventure detective game about a serial killer who drowns his victims in rainwater. Beyond, too, seems intent on imitating film, sporting a convincing, motion-captured performance by Ellen Page as a young girl who has spent her life linked to a ghost. Willem Dafoe also stars? Sold!

Finally, much-buzzed-about WATCH_DOGS (Ubisoft Montreal; Nov. 19) draws on our fear of surveillance and technology’s overwhelming dominance of our everyday lives, and takes that fear to the extreme. As an uber-hacker capable of manipulating the technology around him — from street lights to ATMs to your social media profile — using his cellphone, WATCH_DOGS might be the rare sci-fi game with brains.