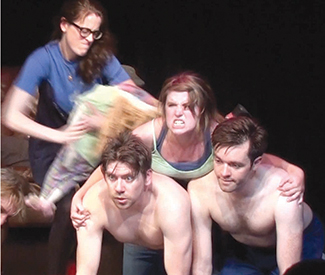 THEATER The sets are gone, and the costumes, and that giant blue-and-yellow tent. Master clown and performance maker John Gilkey has ended his fourth stint with Cirque du Soleil since 1996. But if the wiry, often wild-haired Gilkey is no stranger to the big time, he moves just as ferociously through a bare stage in a small venue wearing not much more than, these days, a bushy beard.

It’s been three years since Gilkey last performed in San Francisco — flanked by comedians Alec Jones-Trujillo and Donny Divanian, the deadpan naïfs of his avant-comedy trio, We Are Nudes. Just as the very funny yet vaguely unnerving, off-center style of Nudes occupied some indeterminate territory between sketch comedy and Dadaist destruction, Gilkey’s latest venture — the Los Angeles–based eight-member improvisational ensemble known as Wet the Hippo — takes its audience beyond the usual endpoints of improv.

Born out of his Idiot Workshop classes in clown, Wet the Hippo is a big, brand-new baby of a beast, only four months old but charging forward with gusto — and an edgy, searching brilliance Gilkey is clearly thrilled with. He is frankly in love with his cast members, with whom he interacts as director, prodding them from onstage and off. Ahead of their first tentative tour (a three-stop zero-budget swing through Arcata, Placerville, and SF), Gilkey picked up the phone from his LA roost to talk Hippo-thetically.

SF Bay Guardian Wet the Hippo is quite a change from Cirque du Soleil, more low-to-the-ground, very much autonomous.

John Gilkey Yeah, what we’re doing now — there’s eight of us, there’s no budget. Low-to-the-ground is a good way to put it.

SFBG It’s a big contrast, but maybe there are similarities?

JG One way I describe the show: I’m taking everything I learned from Cirque about the creation process they have. (Although I should be clear about that: the creation process changed after Franco [Dragone] left.) But I was on Franco’s creative team for [his independent Las Vegas spectacular] Le Rêve —I’ve taken that process and I’ve applied that to this 10-dollar-a-ticket show with eight people. It’s an amazing contrast. And in some ways it’s quite similar.

When I’m working with the performers, I work with them similarly to Franco in that he’s trying really to get to the nut of the person. His number one question is, “Who are you?” He’s trying to figure out what is it about this person that’s interesting. Their strengths, their weaknesses, their physicality, their voice, all this stuff — how can we magnify this person into an interesting stage presence? I do that with my little cast here.

SFBG It’s an improvised show, but it’s clearly not the Harold, or other improv forms we’re familiar with.

JG It’s something new that we’re trying to do, so we’re learning about it, discovering it as we go forward, as we search. It’s an evolving process. But what I’m looking for as the director, both offstage and onstage — or the conductor-director when I’m onstage — is to try to get everybody buzzing, ringing, in tune, and then see how they harmonize. I think when we hit, it is music. It’s on a level you can’t quite put into words. This is when we succeed. We don’t always succeed. Part of the show is us searching for that, which is also fun. We play a lot with success and failure. When we’re failing we try to really make sure that we acknowledge it and somehow use it to our advantage.

SFBG How can failure work to your advantage?

JG One thing we’re discovering is that the highs aren’t as high if the lows aren’t as low. So that’s one reason to fail. And I tell people when we’re rehearsing or in the classes that I teach (all of this came out of these classes): This is the spirit of clown. You’re always looking to get yourself into danger. You want to be in danger. That’s where the drama really comes. Instead of pretending, we try to really get into danger.

SFBG This is an exploration that goes beyond the usual endpoints — something riskier, unknown?

JG In standard improv, in standard comedy, you’re going for the laugh, always. I believe there’s something that is greater than the laugh. Maybe the easiest way to say it is that it’s the sublime. And the way to get to the sublime is to ask an actor to play at their most genius level — either absolute smartest or absolute stupidest. It’s not a linear progression from stupid to genius; it’s circular. It’s where they meet. It’s where the genius in you meets the idiot in you that you become so beautiful that you hit sublime. It’s beyond laughter. It’s the moment where you get your mind blown. *

Venue TBD (“Look for the skinny violinist at 22nd St and Valencia at 7:30pm; you will be escorted to the venue from there”), SF

For an extended version of this interview, visit www.sfbg.com/pixel_vision.