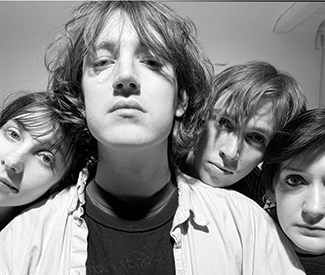 MUSIC This is the reunion for which we dared not hope. Until this year, My Bloody Valentine’s genre-defining masterstroke of the shoegaze movement, 1991’s Loveless, was the last we had heard from the Irish-English band, and as a result, it was canonized as one of those pristine, “perfect” albums, frozen in time and untainted by inferior follow-ups.

And then, this past Groundhog Day, the unthinkable happened: after an excruciating, 22-year wait, and countless broken promises, bandleader Kevin Shields casually posted a new record, mbv, on the web, In Rainbows style, surprising his diehard fans with the legendary third album they had been hopelessly fantasizing about only a week before.

This Friday, My Bloody Valentine will pay a visit to the Bill Graham Civic Auditorium for its first SF show since the release of mbv.

Headed up by Shields (the band’s mastermind, principal guitarist, and sometimes-vocalist), and backed by Bilinda Butcher on guitars and vocals, Deb Googe on bass, and Colm Ó Ciosóig on drums, My Bloody Valentine kicked off its career in 1983 as a rather inconsequential, punk-ish pop band, before moving on to bigger things.

The You Made Me Realize EP and the group’s first full-length, Isn’t Anything, (both released in 1988) showed great promise, layering Jesus and Mary Chain-ish guitar squalls atop tender pop songs, with androgynous, barely intelligible vocals submerged in the surrounding fuzz. Equally seductive and menacing, this was the sound of the shoegaze genre taking form.

The subsequent release of Loveless presented a vivid realization of Shields’ musical vision, full enough to put him in a state of creative paralysis for the next two decades, unsure of where to go next. The songs were more harmonious this time around, often reminiscent of Brian Wilson in their structures and chord progressions. Also, the guitar sound was more rounded and hypnotic than ever before; songs like “Loomer” and “Come In Alone” found Kevin Shields using his “glide guitar” method to great effect, constantly pushing and pulling on the tremolo arm of his Fender Jaguar for a woozy, undulating sound, inviting the listener to get blissfully lost in the midst of it all. Upon its release, and even to this day, Loveless presented some of the most tactile, emotionally complex guitar rock ever committed to tape.

With the exception of a cover for a Wire tribute album, some soundtrack work for Sofia Coppola’s Lost In Translation, the occasional collaboration with Primal Scream or Patti Smith, and a brief reunion tour in 2009, Shields and My Bloody Valentine remained stagnant from’91 to February of this year. Over the course of those two decades, Loveless has built the kind of reputation normally reserved for recordings of the Beatles era; even Phish’s Trey Anstasio has proclaimed it the greatest album of the ’90s. Loveless‘ seminal blend of pop purity and uncompromising noise has spawned a thousand imitators, but no worthy successor, rendering the release of mbv an uncommonly big deal in the music world, even in a year dominated by comeback efforts, from David Bowie to Boards of Canada.

Despite the skeptical fans, who doubted Shields’ ability to recapture his singular sound or take it into new realms, the response to mbv was resoundingly positive. Tracks like “who sees you” and “only tomorrow” found Shields and Co. approaching the monolithically woozy Loveless aesthetic with a fuller, beefier production sound. Halfway through the record, “new you” blindsided the listener as the cleanest, poppiest song of My Bloody Valentine’s career, seemingly lifted from a party scene in a ’90s teen movie. “in another way” found the band channeling the angular jolt of the Isn’t Anything era, while “wonder 2” suggested a new path forward, blending drum’n’bass-y electronics with Shield’s famed “jet-engine” guitar sound.

Part of mbv‘s appeal stems from its utter disregard for modern trends and developments in the music world. This isn’t the sound of My Bloody Valentine recalibrated for the new millennium; the entire album sounds like it could’ve been recorded and produced in ’96, and as a result, we listeners have no idea what was recorded in the mid-’90s, and what was made last year. The listening experience, especially in that first week after its release, was poignant and affecting, like reuniting with a friend you haven’t seen in two decades, and picking up right where you left off. Few records can make you feel 15 again the first time you press play, and mbv was one of them.

While the band’s recent live dates have incorporated new songs into the mix, many things have remained the same: namely, its infamous closer “You Made Me Realize,” the title track from its first great EP, with a 20-minute, endurance-testing wall of noise tacked on the end. The song’s live rendition has made ears bleed around the world, and remains a hallmark of My Bloody Valentine’s live shows.

Now, in 2013, it’s back, with a followup to Loveless in tow, befitting of that album’s legendary reputation. It’s been a long time coming, but My Bloody Valentine has reemerged to save rock ‘n’ roll all over again. Bring earplugs; it’ll get loud.