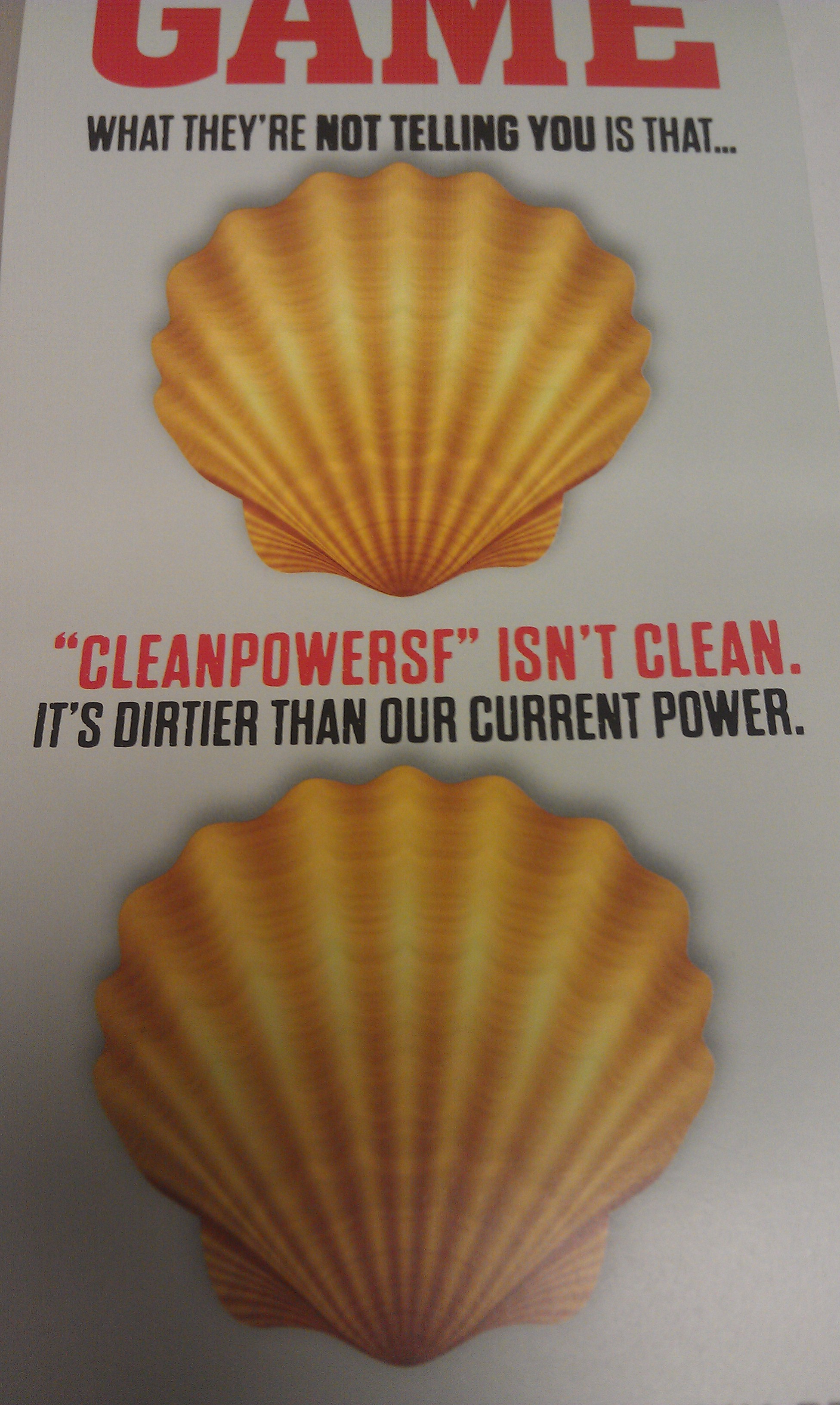 San Francisco’s municipal power agency is gearing up to launch one of the most climate-friendly alternative energy programs in the country, but the forces behind a misleading opposition campaign seek to torpedo that effort.

This past weekend, glossy ads depicting seashells and spilled oil blanketed the doorknobs of Noe Valley residences. Paid for by IBEW 1245, the union that represents employees of Pacific Gas & Electric Co., the door hangers conveyed the fear-mongering message that CleanPowerSF “isn’t clean. It’s dirtier than our current power.”

To put it bluntly, that’s bullshit.

Taking them at face value, you might conclude that Shell was about to begin drilling offshore in the San Francisco Bay and that city officials were planning to meet the city’s energy needs with a polluting power plant run solely off tar sands oil. They might even club some baby seals while they were at it.

What’s really happening is that the San Francisco Public Utilities Commission is gearing up for a hearing on Tue/13 to discuss rate setting for CleanPowerSF, a municipal green energy program that’s been in the works for years. As the power agency inches closer to a full program launch, PG&E and its employees are worried they’ll lose business when San Francisco customers are automatically enrolled in the CleanPowerSF program.

The new power program will continue to use PG&E infrastructure and its existing billing system, but customers’ homes will be powered with a greener electricity mix procured through the city-run program, which is contracting with Shell Energy North America to purchase electricity on the open market from a variety of green power sources.

Naturally, San Francisco is teeming with savvy environmentalists who aren’t buying the slick oppositional blitzkrieg. On Aug. 13, some will band together to set the record straight when a host of representatives from the Sierra Club and others rally at City Hall at noon to express support for immediate implementation of CleanPowerSF.

“Clean energy aggregation is on the rise across the country, making an immediate and direct impact on climate emissions,” said Shawn Marshall, Director of LEAN Energy US. LEAN works with organizations that use the municipal power-purchasing model that CleanPower SF is based on. “The only thing blocking progress in San Francisco is corporate politics, and we encourage the city to deliver on its environmental promises by pressing ahead with CleanPowerSF.”

In a letter to San Francisco Mayor Ed Lee, former EPA administrator and World Wildlife Fund Chairman Emeritus William K. Reilly emphasized that CleanPowerSF “is a crucial step for achieving California’s 2020 greenhouse gas goals. It’s also an essential model for California and the rest of the country as cities and communities are compelled to address the problems fueled by climate change.”

Back to those misleading ads. While it is true that Shell is an oil company with a shoddy track record of human rights abuses, it is not true that the energy supplied by CleanPowerSF will be dirtier than electricity provided by PG&E.

To the contrary, only 20 percent of PG&E’s energy mix is derived from green power sources, while the majority of its electricity is generated by nuclear facilities or natural gas power plants. PG&E is also the company responsible for the hexavalent chromium groundwater contamination in the California town of Hinkley, in the Mojave Desert, which provided the basis for the movie Erin Brockovich.

And more recently, PG&E was responsible for the deadly pipeline explosion in San Bruno, which leveled an entire neighborhood. In comparison, CleanPower SF will offer a 100 percent renewable energy mix out of the starting gate.

Some of that mix will initially be derived from renewable energy credits. Called RECs, they’re cheaper because they are “credits” accounting for green power generated somewhere, as opposed to actual green power coming straight over the power lines.

But it’s important to note that the initial use of RECs is a pricing strategy designed to put the agency in a financial position to support green power projects here in San Francisco a little further down the road.

The long-term plan of constructing green power facilities locally would create permanent, decent-paying jobs. It would also supply San Franciscans with electricity generated with technology that can harness the unlimited power potential of the California sun, or the wind that blows in off the Pacific Ocean. This is the outcome that PG&E affiliates seek to thwart, because they fear profit loss.

A few months ago, in an interview with the Guardian, SFPUC spokesperson Charles Sheehan emphasized that it had taken many conversations to get to the point that the agency has finally reached.

“We’ve lowered the rate, we’re now more competitive with PG&E’s baseline offering, and we’re on parity with their potential green tariff program,” he explained. Speaking of a dedicated revenue stream that would go toward funding local clean-power projects, he said, “That line item is really critical to get us to the build-out that we’ve all collectively envisioned as a staff, and as a community.”