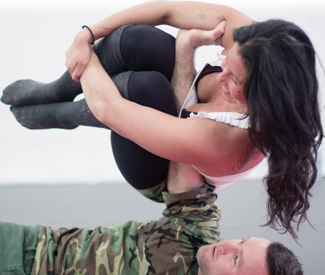 ON THE OM FRONT It’s a Tuesday night, and AcroYoga teacher Ariel Mihic is laying on her back, her legs at 90 degrees, her feet supporting the shoulders of her upside-down teaching partner, Liz Williams. They collectively adjust a few limbs and Williams starts twirling slowly to one side, completing a maneuver called Asymmetrical Reverse Star. You can hear a small gasp from the students (including myself) who are watching the graceful duo. The move looks nearly impossible, but within five minutes, everyone is attempting it — and either high-fiving one another after nailing it, or laughing as the flier takes a dive into the arms of the base or a nearby spotter. Yes, the floors are padded.

AcroYoga, which I’ve been practicing for six years, is many things: an athletic pursuit, a community gathering activity, a game played between friends, and a practice of concentration and trust. It combines yoga, acrobatics, and healing arts like Thai massage, and it typically involves a base (the person on the ground), a flier (the person being held aloft by his or her hands, shoulders, or feet), and a spotter. The practice was officially created in San Francisco in 2003 by Jason Nemer and Jenny Sauer-Klein, and has since evolved into an international movement that has spread to more than 40 countries in six continents. AcroYoga communities now exist all over the world, in cities like New York, Mexico City, London, and Tel Aviv. But, says Mihic, there hasn’t been a real central hub for the San Francisco AcroYoga (or “Acro”) community — until now.

“Acro started in San Francisco, so you would expect this to be the Mecca,” says Mihic, a passionate practitioner who trains daily to improve her strength, flexibility, and acrobatic skills. “We have a huge community here but the scene always felt a little disparate. Teachers were always teaching in separate places. AcroYogis would come to town looking for the classes and jams, and there was never a central place to send them.”

Now local gymnast and martial artist Stephan Goyne is hoping to shift this. Three years ago, he opened a Jiu Jitsu studio in Japantown called Bay Jiu Jitsu. Shortly after it opened, he put an AcroYoga class (taught by Natalie Weinstein) on the schedule. The class attracted a lot of practitioners, and Goyne decided to add AcroYoga to his business model, calling the new program Bay Acro. (The classes at Bay Acro also draw from other modern acrobatic movements like YogaSlackers, Dutch Acro, and AcroYoga Montreal.) Goyne now has three spaces for his Bay Jiu Jitsu/Acro business: Japantown, Oakland, and, most recently, the Outer Mission. Because Goyne is fairly new to AcroYoga, he hired Mihic to manage the program.

Like many folks in San Francisco who watch the colorfully dressed AcroYogis and slackliners in Dolores park on weekends, Goyne had to warm up to the idea of AcroYoga. “I hated it at first,” he says with a laugh, admitting that he thought it was just for modern-day hippies. “The first month that we offered it, I sulked in the corner and took payments and thought, ‘This is kind of dumb’.”

But then, once he started studying the practice, he became hooked. He realized it had a lot in common with Jiu Jitsu: It is a living art (so it keeps evolving), it combines strength and precision, and it’s a practice of mastery. One of AcroYoga’s other attractions as a physical discipline is that it’s accessible to folks of varying skill level and age, he says. People begin the practice in their 30s, 40s, and 50s, which is highly uncommon in traditional gymnastics. AcroYoga also reminds Goyne of his childhood love: skateboarding. “You’re trying to hit this one trick, and you’re all rallying each other to do it,” he says, “just like in skateboarding.”

Amy Buchholz, a seasoned AcroYoga flyer, says that the new spaces are pulling the community together in a much needed way. “I think it’s wonderful because there are so many people doing Acro in the Bay, from Marin to the South Bay, and it’s awesome to bring it all together in San Francisco,” she says.

There are currently nine classes (ranging in skill level) and five open-play “jams” on the Bay Acro schedule. Though Bay Acro emphasizes training and mastery of the acrobatic aspect of practice, there are some more mellow offerings, like Acro Therapeutics class (for just relaxing and stretching) and periodic “Bodywork and Dessert” parties, featuring guided massage and local djs. The ultimate goal, says Mihic, is to create a balanced and diverse program that can serve everyone from newbies to hardcore AcroYogis, and be a hub for both out-of-town students and visiting teachers. “But we don’t do cuddle puddles at Bay Acro,” adds Goyne. “It’s in the contract.”

At the end of the day (or a challenging foot-to-hand-to-throne-to-pop-up-into-bird-to-shoulderstand-scorpion-flow), the best part of AcroYoga practice is that it’s good, clean, grown-up fun. “We all get busy with work and daily activities, and it’s easy to forget how to play,” says Mihic, who, when she isn’t basing other AcroYogis (including small deft flyers, big muscular guys, and even her mom), is a marketing consultant for the fast-paced biotech industry. “But when we get together for Acro, we’re like, ‘Hey do you want to play?’ It’s just like an old play date when you would meet your friend on the corner of the cul de sac.”

San Francisco is the perfect place for a practice like this, adds Mihic, because AcroYoga is always pushing boundaries, just like the locals here. “In Acro, if something’s never been done before, it’s like, ‘Go try it!’,” she says. “That’s the same entrepreneurial vibe that San Francisco offers in all walks of life.”

GET YOUR ACROYOGA FIX

near the palm trees by Dolores and 19th Street, SF.