Home From the mouths of BART workers; cleaning the dreaded escalators, skirting death 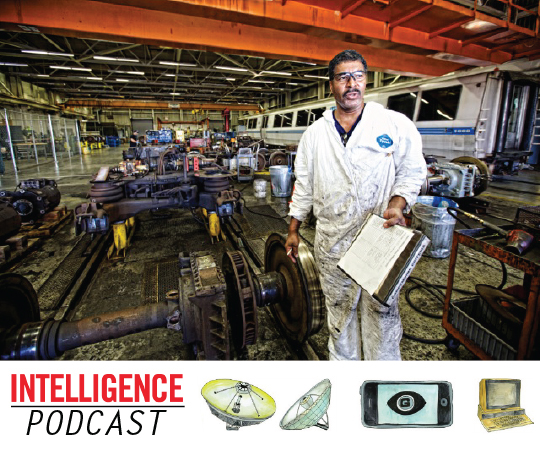 A reprieve in BART negotiations has given the Bay Area time to breathe before the next possible strike, but a lot of public concerns and animosity toward BART still remains. So the Guardian decided to take a look at BART workers themselves (we found them through their union) and ask, “How would your life change if the unions adopted BART management’s offers on safety, pensions, wages and health care?”

Note: The audio interviews are summarized in this post, but give them a listen to get a fuller picture of the impact of labor negotiations on worker’s lives.

First we met Robert Earl Bright, a 47-year-old transit vehicle mechanic at the Hayward yards, where he’s been for three years. BART trains seem tame compared to the machines he used to work with, as he started out as an Air Force mechanic working on cargo planes.

It’s that experience he draws from when he said BART’s policies are becoming increasingly dangerous.

Bright is tall but soft-spoken, and while we sat at a bench in a courtyard at Lake Merrit BART station, he talked about the shortcuts BART has taken lately, and how overtime and consolidation are bad practices for everyone involved.

There used to be specific workers called Power & Way controllers who looked out for workers on the train tracks and made sure they were safe, he said, but those responsibilities were consolidated into a separate train controller position. Since then, Bright saw the death of a colleague, a mechanic who switched from a graveyard shift to a day shift and was hit by an oncoming train.

Only after the death did BART take steps to ensure parts of the track where there was less clearance safe from trains were marked, he said.

“The problem is BART seems to wait until someone gets killed until they want to do something about it,” he said.

Bright is a new grandfather. He helps support his daughter and her two toddlers, and he supports his older brother who suffers from dementia. Bright has a home that his fiance bought, but is “upside-down,” as he says, because of a predatory loan.

He’s one of the lucky ones though, as the military pays for his health care, and the negotiations don’t impact him as far as that goes. But he does worry about his pension, and thinks he may have to cut back on supporting his elderly brother and his grandchildren. Even with those cutbacks in his life, he’ll likely have to look for a part time job as a car mechanic, he said.

While contemplating that future, his four-hour daily commute, and the new expectations BART asked of his crew to repair more cars in less time, he started to develop an ulcer.

“They’re short on people, and it’s cheaper for the managers to pay for overtime than to pay for another person,” he said. The stress pressed on him and one day at work he grew dizzy and collapsed, and that’s when he started to be a little more zen about what BART asked of him. But he still said it’s not right.

“Our shop is a mod [modification] shop, but we got tasked with doing preventive maintenance. Our shop isn’t set up for that,” he said. And that means workers who aren’t trained for that particular job are pushed to fix up cars when normally they’re doing an entirely different job. That can be dangerous, he said.

As far as Bright goes, he said he’s seeing more people working over time at the request of managers, working longer hours that could lead to unsafe conditions — not just for the mechanics, but for the people who ride BART every day.

“Wherever they need me, that’s what I do,” she said.

Alexander often starts her days cleaning the elevators and escalators at Powell Street Station, and if you’ve been reading the news lately, you know what that means.

She doesn’t mince words about it: “I clean the urine and the feces out of the elevators and make sure it’s clean and smelling good for the patrons.”

But Alexander doesn’t hold it against the homeless. When she first started at BART, she had little contact with them. But over the years, she’s made good friends out of some of the homeless at Powell and 16th St. stations, and the latter is where she sat and told her story.

“As the years passed it got worse. People living in their cars on the streets, in their doorways. I’ve met a lot of wonderful homeless people, wonderful people,” she said. And as the years went by, it got harder for the cleaning crew, too. She’s one of two systems service folk who take care of Powell Street Station at any one time.

“Sometimes it can be tough, it can get hectic, but we get it done. It’s hecka huge, and there’s only two of us, but we have to do the best we can do.”

But she keeps with it for herself and her daughter.

Her daughter just finished medical school and is still living with her. Alexander makes about $52,000 a year, she said, and couldn’t figure out major cuts she’d make in her lifestyle to make room for paying more into her pension or health care.

“It would hurt me,” she said. She said that though people in the Bay Area demonize BART workers for wanting a raise, she feels it’s simply been too long since they’ve had one.

“I think I haven’t gotten a raise in two contracts. Its been like seven or eight years,” she said.

Devoutly religious, ultimately she keeps faith that the workers will prevail in negotiations.

“(God) is going to bring this through … this thing with management, it’s going to be all right,” she said.