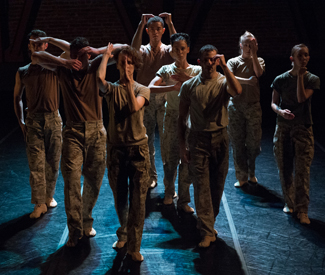 DANCE Though only in its third incarnation, Amy Seiwert’s wide-open “Sketch” has become a hit. The idea behind this annual summer project is to give acclaimed choreographers a chance to tread unfamiliar territory. One of the drawbacks of having a sizable repertoire to your credit is that you develop a comfort zone. You know what’s worked for you in the past, but the world is not nearly as wide open as it used to be.

“Sketch” tries to be something like a playground for experienced dance makers, who are given between 40-50 hours to come up with a piece for Seiwert’s Imagery company dancers. This year’s version, “Sketch 3: Expectations,” for which Val Caniparoli, Marc Brew, and Seiwert herself stepped up to the challenge, must be considered a success. Not everything worked, but that’s to be expected. Still, you could see minds stretching themselves all evening long. The eight dancers — some local, some from other parts — performed heroically; they were Brandon “Private” Freeman, Rachel Furst, James Gilmer, Sarah Griffin, Weston Krukow, Annali Rose, Ben Needham-Wood, and Katherine Wells.

The most transparently cohesive work proved to be Caniparoli’s Triptych, which moved with consummate ease through its singular unisons that split up into multiple smaller configurations, only to gather its dancers again and again in the anonymity of military stand-at-attention stances. Caniparoli’s command of dance language is impressive.

He found inspiration for Triptych in Lalage Snow’s portraits of British soldiers deployed in Afghanistan. Contrasting contemporary string scores by John Tavener and Alexander Balanescu — meditative and quiet from the first, dramatic and dissonant from the second — worked well.

Instead of focusing on the horrors of war, Caniparoli investigated how it feels to be an anonymous cog in a machine. Again and again, he sent lineups around the stage, their precision and discipline suggesting confinement. Even the individualized gesture language suggested regimentation. Yet at Triptych’s center he placed a languid and intimate pas de deux for Griffin and Krukow, surely one of Caniparoli’s finest creations. But at the end, when the dancers moved straight toward the audience, you could only see their empty eyes.

For Australian-born, UK-based Brew, Awkward Beauty was a return to ballet — the style he trained in until an accident ended his performing career. As a choreographer he works in a wide variety of styles and media, but ballet is not usually one of them.

Awkward is, perhaps, ironically and yet appropriately named. A rather non-descript commissioned score by Dan Wool and murky lighting by Jim French didn’t bring much to a work in which Brew seemed interested in exploring some of ballet’s classic tenets, among them verticality. He appears to have assembled a lot of individual ideas that, unfortunately, didn’t coalesce into a comprehensive statement.

He put three of the women in pointe shoes — Wells is primarily a modern and post-modern dancer — and opened the piece with a striking image of the women standing on the men’s shoulders. From there, they individually worked their way to the ground. The maneuvers, however, looked forced and insecure — not something to attempt unless there is a lot more rehearsal time.

Upstage, a dance gesture traveled wave-like along a line; women were passed overhead in upside down splits, and (somewhat inexplicably) the dancers made repeated use of theater’s metal support beams. Center stage was given over to smaller units. The women’s trio — with the gorgeous Griffin as its center — looked balletically demure until the women literally let their hair down. Then Furst and Rose bourréed across the stage in lovely sync after a moment of looking like a sculpture of puppies.

An intricate duet for Wells and Needham-Wood played with verticality, and the giving and taking of support. Subtly, athletically, and with some poignancy, the piece showed what could have been by showing how awkwardness and beauty can coexist.

Seiwert has said that her work The Devil Ties My Tongue was inspired by Leonard Cohen’s poem S.O.S, fragments of which became part of Olafur Arnalds’ weather-inspired score. It also buzzed through dancers’ intimate whisperings. The piece opened with the dancers in semi-darkness watching a vulnerable Gilmer unfolding himself, before segueing into small units — double and triple duets, a male trio, and two contrasting pas de deux for Griffin and Krukow, and, to end the piece, Freeman and Wells.

Seiwert’s ability to layer complex, tension-filled structures that change kaleidoscopically with jutting limbs and interlocking legs — yet always look as if etched moment by moment — continues to surprise. Here, some of the encounters had a newfound intimacy about them, none more than the one for Freeman and Wells. The way he snuck around her, it wasn’t clear whether he was courting, protecting, or preying on her. Still, I want to see Devil again in a different context. It was not well suited as a closer. *