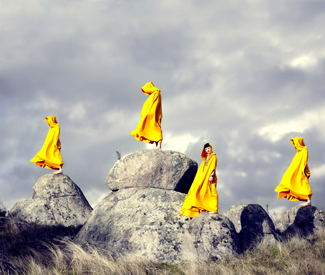 MUSIC “That’s it, I’m done. In love.” This is what Erykah Badu had to say, late last year, upon discovering Hiatus Kaiyote: an unsigned “future soul” ensemble from Melbourne, Australia, with a Bandcamp page, a single EP to its name, no marketing budget, and everything to prove.

Now, less than a year later, the band has found itself reissuing its self-released debut LP via Sony (with a newly added guest spot from Q-Tip, no less) and co-headlining a highly anticipated bill with D’Angelo and Badu herself, in Detroit later this summer.

This Sunday, Hiatus Kaiyote will grace the Independent, in its first ever SF appearance, with local R&B powerhouse, the Seshen, featured in the opening slot.

So, how does an unassuming four-piece band, from halfway across the world, find itself on the radar of America’s neo-soul elite?

The answer to that question lies almost entirely in the strength of Tawk Tomahawk: Hiatus Kaiyote’s inaugural statement as a group, which rips through its 30-minute runtime with incendiary force, and a mind-boggling flair for invention and appropriation.

West African polyrhythms intermingle with sludgy, offbeat grooves á la J Dilla. And 1970s electric piano-washes bounce off harsher, synth textures resembling IDM and the LA beat scene as led by Flying Lotus. All the while, the production sound switches between clean lushness, and uncompromising rawness, at the drop of a hat.

Hiatus Kaiyote might identify as a “future soul” ensemble, and Nai Palm’s impassioned, show-stopping vocals surely establish a strong R&B foundation, but in the end, Tawk Tomahawk sounds less like a soul LP than an unfiltered rush of creative energy, heaping countless ideas and influences into an ecstatic vision of musical possibility.

This anything-goes approach is largely the result of all four members’ divergent musical backgrounds, and the varying influences they bring to the table. Vocalist and guitarist Nai Palm is the band’s principal songwriter, whose intricately layered, shapeshifting compositions move with Jeff Buckley-esque vertigo.

Drummer Perrin Moss is an accomplished MC, whose hip-hop background is evident in the lumbering chug of his grooves, often recalling Questlove’s work on D’Angelo’s Voodoo.

Bassist Paul Bender, a former student of University of Miami’s jazz program, lays down basslines as intricately fingerpicked as they are viciously slapped and primally funky.

Keyboardist Simon Mavin has found himself inhabiting a range of scenes, from Latin, to soul, to dub-reggae, which comes through in the lush, diversely textured tonal layering he brings to Hiatus Kaiyote’s sound.

“I think if you listen to our music enough, you sort of start to realize that it’s not just a soul band, or a jazz band… Our influences are pretty vast,” Mavin told the Guardian via Skype, from a hotel room in Mulhouse, France, the night before an eagerly anticipated appearance at the Montreux Jazz Festival in Switzerland. “We’re all in it because we want to be creatively intense, and stimulate each other through our ideas.”

This potency of ideas, and resistance to categorization, is likely what caught the ear of BBC’s tastemaker-in-chief Gilles Peterson, the famed radio DJ and musical ambassador who first brought Hiatus Kaiyote’s sound to international attention.

Not long after, the Twittersphere went abuzz; when everyone from Badu to the Roots’ indispensable Questlove began singing its praises, Palm, Mavin, Bender, and Moss were vindicated (in small circles, anyway) as saviors of soul music, transitioning it from a largely revivalist, wheel-spinning art-form, into a musical attitude with the ability to transcend genres as freely as it consumes them.

After its first American tour this spring, (including stops at SXSW and Questlove’s big-deal club night at Brooklyn Bowl), Hiatus Kaiyote signed a contract with Flying Buddha records, a subsidiary of Sony, which re-released Tawk Tomahawk last week, featuring a guest spot from A Tribe Called Quest’s Q-Tip added to their breakthrough track, “Nakamarra.” A sophomore LP is in the works as well; however, the band doesn’t plan on significantly altering its homegrown, independent recording process.

“Sonically, the reason we signed this record deal is because it enables us 100 percent creative freedom, even down to the point of mixing it,” Palm explained. “So, we’re gonna be recording it in our own setup… same home studio vibe.”

The magic of Hiatus Kaiyote can be found in this balance between the otherworldly thrust of its music, and its insistence on this humble, DIY approach to songcraft. By rejecting the interference of producers, engineers, and other outside forces, Palm, Mavin, Bender, and Moss have generated a sound that bears the single-minded vision of a great auteur, yet with the richness of ideas allowed by the collaboration of harmonious minds.

If Hiatus Kaiyote’s ascent continues, Erykah Badu could end up with some serious competition atop the soul pyramid.

With the Seshen, Bells Atlas