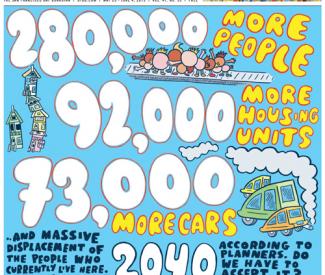 Newly designated priority development areas (PDAs) will enable modest-density, walkable development in city and suburb alike, while preserving both existing single-family neighborhoods and open space. In a time of urgent need to address global warming, the Bay Area has once again proved a leader by enabling compact housing around transit, and its supporting studies expect the per capita greenhouse gas emissions from driving to decline by 15 percent in 2040.

This will not save the world and it’s not without some challenging byproducts — such as preventing displacement of low-income residents from San Francisco and other urban centers — but it is a start. And in a nation hell-bent on denying the urgency of global warming, it is refreshing and inspiring that someone, somewhere, is trying to do something.

Yet the transportation component – the lynchpin and impetus of Plan Bay Area, according to many local leaders –is mediocre, uninspiring, and inadequate.  Despite land use policies enabling compact development, 80 percent of all travel in the Bay Area will still be in cars in 2040, not much different from today, and far short of the real change that is needed in this time of urgency. With 2 million more people, this is a recipe for gridlock, inequity, and ecological disaster – not sound public policy.

It should be no surprise that a big part of the problem is funding. The MTC, charged with assessing future regional transit potential, identifies just $289 billion between now and 2040 for roads, bridges, and transit — far short of what’s needed.  At $10.3 billion a year that may seem like a lot, but upwards of 87 percent of this is already committed to maintenance of existing roads and transit– not transit capacity expansion.  New homes and jobs might be focused around BART and Caltrain stations, but because there’s no real capacity expansion, the current iteration of Plan Bay Area can’t even reach its own modest goal of 74 percent of trips by car in 2040.

With 2 million more people, cumulative emissions from driving will actually increase by 18 percent because so few new residents will be able to squeeze onto our already crowded transit systems.  Today BART is breaking ridership records but it is crowded. Extensions to far flung suburbs might be worthwhile but they don’t expand capacity in the system’s core. What we need is a second BART line and/or Amtrak service between San Francisco and Oakland, but this is absent from the plan. Meanwhile, most mainline Muni buses and railcars are currently jam-packed, yet San Francisco is somehow expected to absorb 92,000 housing units in Plan Bay Area.

Supervisors David Campos and Scott Weiner, representing San Francisco in the Plan Bay Area process, are to be commended for drawing attention to the transit problem and for asking MTC staff to show how to meet future funding gaps. By broaching the subject, they show that San Francisco might be poised to lead on this critical issue. But Campos and Weiner, working within the “fiscally constrained envelope” as framed by MTC planners, were only seeking to cover deficits for existing service – not visionary expanded service.  In the end, there was no real vision for adequate transit capacity expansion.

This foretells a troubling transit future – and one that will likely be more and more private. While many San Franciscans decry the proliferation of Google buses and other private corporate shuttles hogging Muni stops, these buses do lay bare the transit conundrum in the Bay Area. Without well-funded, visionary capacity expansion of public transit, those with the means (and high wage jobs) will shift to private buses while everyone else is left to duke it out on crowded highways, buses, and trains.

This conundrum demands that progressives in the Bay Area ramp up their transit politics to lead locally and nationally. The debate about transit finance needs to be redirected – away from regressive local sales tax measures (which often include more roads) back towards more progressive measures, such as transit assessment districts – which could require developers who profit from Plan Bay Area’s growth incentives to adequately finance transit expansion.

The debate needs to move away from demonizing public transit employees to a discussion of the role and responsibility of corporate health care, banks, and the real estate industry in causing economic instability (which has harmed public transit finance more in the last decade than a bus driver expecting a living wage and healthcare). The debate needs to move away from creating new roadway capacity, such as exclusive toll lanes, and focus on how to convert existing highway lanes into transit-only lanes with fast, frequent, reliable regional bus service open to all.

Plan Bay Area is a living document, a work in progress. Within the next four-five years it will need to be revised and can be improved.  The current version of the plan, weak on transit funding, has been dominated by a loud, irrational mob of Tea Party cranks bent on sabotaging anything that hints of progressive ideas. They were successful in diluting Plan Bay Area. While a smattering of progressive transit activists showed up and attempted to shape the plan, next time the plan needs a broader progressive movement — including housing, social justice, and environmental activists — to demand a truly visionary transportation plan.

Jason Henderson is a geography professor at San Francisco State University and the author of Street Fight: The Politics of Mobility in San Francisco. We’ll be sharing his perspective regularly in the Bay Guardian.