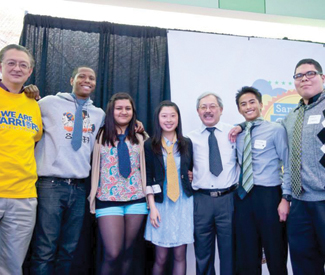 Despite signs of economic recovery, many young people still face hard times due to high unemployment, low wages, and a lack of job opportunities. San Francisco Mayor Ed Lee recently sought to tackle this issue locally with the rollout of Summer Jobs + 2013, a public-private partnership with an ambitious goal of providing 6,000 jobs and paid internships for San Francisco’s young adults. It was the most ambitious goal ever pursued in a city jobs initiative, with particular emphasis on low-income youth.

“I’m calling on all San Francisco companies to take on this challenge to support the youth of San Francisco,” Mayor Lee said at a press conference in April, when he joined House Democratic Leader Nancy Pelosi in unveiling the program, the local manifestation of an Obama Administration jobs initiative. “Creating meaningful employment opportunities for our young people today will set them up for success now and in the future.”

But Summer Jobs + is falling far short of its goal, resulting in the creation of only 3,200 summer jobs. The Mayor’s Office is still holding out for a possible influx of hires next month that could bring it closer to the goal before summer’s end, Gloria Chan with the San Francisco Office of Economic and Workforce Development told us.

Last summer, the Mayor’s Office launched a similar initiative aimed at providing 5,000 youth jobs and internships, and ultimately exceeded the goal by 200 positions. Roughly 32 percent of those jobs were in the private sector, predominantly tech. At the end of the day, only about 14 percent of the program’s participants locked down private-sector jobs, with employers ranging from Starbucks to Bank of America to Twilio.

Despite some success in helping young San Franciscans find work, the efforts so far amount to a kind of Band-Aid solution to a problem that goes much deeper and cannot be solved by simply teaching young people to draft polished resumes. Youth unemployment, particularly among low-income and marginalized groups, has worsened over time and is linked to a broader trend of economic inequality.

The Urban Institute, a nonpartisan think tank, recently turned an eye toward economic pressures facing young people with the release of a study titled, “Lost Generations? Wealth Building among Young Americans.” (see “Wealth vs. work,” May 1).

The institute found that among young people, “Average wealth in 2010 was 7 percent below that of those in their 20s and 30s in 1983. Even before the Great Recession, young Americans were on a strikingly different trajectory. Now, stagnant wages, diminishing job opportunities, and lost home values may be merging to paint a vastly different future for Gen X and Gen Y. Despite their relative youth, they may not be able to make up the lost ground.”

In the aftermath of the Great Recession triggered by the economic crash of 2009, millennials ages 16 to 24 have faced dramatically lower employment and income rates in comparison with their elders, according to Bureau of Labor Statistics data.

In California, where unemployment stands at 10.5 percent, the millennial unemployment rate is 20.2 percent. Additionally, the median income of employed young adults in California fell from about $35,000 to $32,000 from 2005 to 2011, while other age groups recovered on average. In San Francisco, the unemployment rate for young people aged 16 to 24 was just shy of 14 percent in 2011, double that of individuals spanning ages 18 to 34.

“We know that there’s been a lot of reporting out there that the recession was particularly hard for young adults, but it’s also important to note that they are in a much bigger hole than everyone else,” Rory O’Sullivan, a policy director for Young Invincibles, told the Guardian.

Young Invincibles is a national organization that works to expand opportunities for young adults in education and employment, and to bring attention to the oft-ignored economic plight of young adults seeking a foothold in the job market.

Young Invincibles found the Great Recession hit young adults harder than any previous recession in recent history. A quarter of job loss experienced by millennials occurred after the recession ended, while the unemployment rate for 18 to 34 year olds has consistently been double that of those 35 and up.

“Young people usually take a big hit in a recession,” said O’Sullivan. “Since they’re often the first fired, last hired in a seniority system. You’re going to let go of recent hires and not the more experienced folks.”

It’s a problem that can potentially have broader effects in the long run. “There are huge consequences for the economy down the road if we have a whole generation out of work,” explained O’Sullivan. “Lack of internships and first jobs can really hurt a young person’s wages. If a young person graduates in a recession, their wages will take a hit for decades afterwards — and that could have huge consequences. We’re still a long way behind.”

There’s no easy fix for the myriad economic pressures surrounding young adults, but O’Sullivan points to public-private partnerships as a way to get young people back in the market, even though that doesn’t seem to be working in San Francisco. O’Sullivan said Young Invincibles would like to see more public service jobs created for young people. “There’s a huge demand,” O’Sullivan said. “Rebuilding after national disasters, building houses, tutoring. We have to do a better job of connecting young people to this workforce.”