Home Nothing could be more super duper than 'So Super Duper' 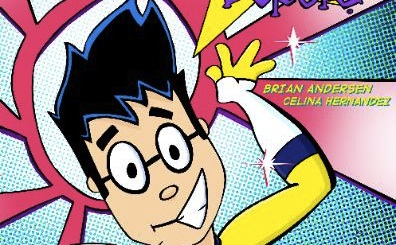 On Saturday evening in the Castro at 7pm, quite possibly one of the gayest things ever will occur, as queer comics artist Brian Andersen debuts his colorful new teen-friendly, straight-friendly, unabashedly queer So Super Duper volume, which stars “a little gay empathic hero (he can read emotions) named Psyche who doesn’t quite know he’s gay yet – even though it’s painfully obvious to everyone around him.”

It is so cute. And gloriously upping the pink quotient at the book launch, nationally televised diva Jason Brock will be hitting some high notes (he basically ruled the Bike Music Festival a few weeks back). Comics, superheroes, man-divas: It’s a gaysplosion.

I asked the infectiously smiley Brian to talk a little about the So Super Duper‘s inspiration, and he had some very interesting things to say about being a proud femme-y gay guy in a world of macho stereotypes.

SF Bay Guardian Can you tell me a bit about what inspired you to create such a “super duper” gay hero?

Brian Andersen I’m inspired by my love of comic books, an everlasting and unwavering love for the medium since I was a skinny, gawky, goobery eight-year-old boy saving his recycling money to pick up the latest issue of the X-Men. I still live, breath, and love comic books 30 years and 100 pounds later.

As for the hero, Psyche, himself, there does seem to be a backlash in the gay community on femme guys. So much attention is put on being “masculine” that often I get online trolls attacking me because my lead character is too “stereotypically gay.” Which is ironic because he’s based off myself! I’m a fruity gay. And so what? I don’t try to be; I’m not putting on some affectation or playing a role in an effort to be more “gay” (whatever that means).

I’m just me. If people can tell I’m gay from space I don’t care! I like being me and I don’t feel the need to try to put on a false masculine identity in order for me to “fit in” with what’s considered sexy and hot in my community. I’d rather be a sexy and hot slightly effeminate gay dude with a few extra pounds and a heart of gold! Just like Julia Roberts in ‘Pretty Woman.’ (She was a gay dude in that movie, right?)

SFBG Is this a “steamy” comic?

SFBG Psyche is based on yourself — do you consider yourself a bit of a superhero?

BA Well, I’m actually a wanted felon from the Shi’ar interplanetary space system. OK, I grew up in small three-bedroom home in Northern California, I don’t presently have superpowers but as a boy I kept diving into toxic waste in the hopes it would eventually bear fruition, I went to Brigham Young University – so yes, I’m another one of those gay Mormons that keep popping up in SF. I didn’t come out as full-fledged homo until I was 26 (a lifetime in modern gay years), and I’ve been with the same man – my first boyfriend ever – for 12 years and we’re still not sick of each other. Yet.