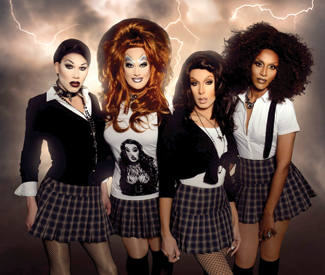 FILM RuPaul’s Drag Race season four winner Sharon Needles and boyfriend/season five finalist Alaska Thunderfuck rarely do live shows together. But for Peaches Christ, and her stage-and-screen showing of witchtacular occult movie The Craft (1996), they made an exception.

The Pittsburgh-based couple will star alongside one another in Christ’s Craft-based pre-movie play, as pure evil “Nancy” (originally played to perfection by wild-eyed, real life Wiccan actress Fairuza Balk) and Neve Campbell’s scarred and shy “Bonnie.” The rest of the gothy teen coven will be filled out by Christ as good witch “Sarah” and San Francisco’s first RuPaul’s Drag Race contestant Honey Mahogany as “Rochelle.”

“It’s such a foursome vehicle,” Christ says in a phone call. “I said to Sharon, ‘how do you feel about working with your boyfriend?’ Obviously it makes more sense for them to split themselves up and do more gigs. And especially since Sharon was such a phenomenon and Alaska is now coming fresh off the show, and she was such a hit. But I said, ‘see if you’ll make an exception for me?'”

Christ has been sending up cult classics in San Francisco since 1998, and says that it’s become increasingly clear that she needs to keep looking for newly cult titles. (This November look out for 9 to 5 with Pandora Boxx , and likely, a Clueless send-up.) “[The Craft] was brought to my attention by some of my fans these past few years, so I rewatched it and determined like, oh my god, why did I ever dismiss this? It’s witchy goth girls. It’s everything, it’s grunge, it’s goth, it’s witch.”

And Thunderfuck and Needles were both enamored of the film from an early age.

“And I’m from the ’90s so the witchcraft was always there,” Needles adds.

The film has grown cult thanks to now-iconic scenes of the witches looking fierce at Catholic school, walking in a line down the hallways with sexy ’90s music filling the montages. Favorites scenes by the performers include the ones of the witches down at the beach, intensely invoking “Manon” then passing out after an electric bolt hits Nancy, or the next morning, walking by beached whales and sharks, or giddily casting spells on another while driving through town, or vividly messing with teen-queen parties, and throwing sleazy jerks out of windows.

During our conversation, Needles perfectly intones the Nancy line, “then why are you still bleeding?!”

“I’ll tell you, this was one of the hardest and most challenging stage plays I’ve ever had to write, because the movie is so full of moments that people love, trying to cram them into a 50-minute stage show was almost impossible — I had to go back in and kind of kill babies here and there,” Christ says. “My memory of it was that it was a lot tamer, and a lot more PG-13 then it is. It’s actually rated R and it’s harsh, and in some ways really horrifying. The way the girls treat each other, even despite the violence or the snakes — I hate snakes — just the meanness of the witches.”

That meanness should play out in some deviously amusing ways during Christ’s The Craft: Of Drag show before the film. The queens play themselves emulating characters in the movie, with key scenes thrown in (someone will get thrown out of a window, and there will be a levitating “light as a feather, stiff as a board” moment) — but with a Drag Race twist. The reason the witches all turn on Christ’s “Sarah” this time, is because she’s never been on Drag Race.

This inevitably leads to the question of why not? “I don’t think I’d survive,” Christ says. “I’ve said this to Sharon, I admire them so much for being able to go on that show but Peaches is a very established character that I’ve been doing for a long, long, long time, so it’s very hard for me in a lot of ways to be flexible. You know, I always wear that Bozo the Clown paint, and I just know I’d be ripped to shreds,” she says. Though she has been sending out signals to producers World of Wonder and RuPaul that she should come on as a guest judge for a hypothetical Scream Queen challenge.

It was the show, however, that first introduced her to Needles — Elvira was the guest judge on the first episode of Needles’ season, and she fell in love with the queen (who spurts blood from her mouth during her runway walk). Elvira immediately told Christ, and that’s why she first reached out to Needles, last year.

Along with heaps of praise for Elvira, and the show in general, Needles and Thunderfuck both tell me the drama in their seasons was all real.

Says Needles, “When you take 13 adult males and dress them up like teenage girls, take away their cigarettes and booze, and force them in front of a camera for 16 hours a day for two months, you don’t need a producer or a storyboard, it writes itself.”