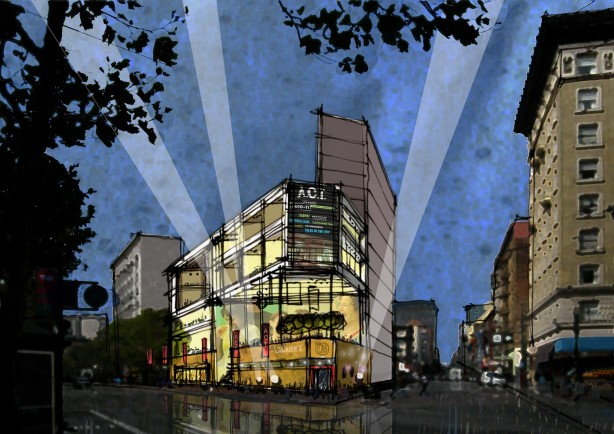 Is there a place for community theaters and nonprofit arts and education programs in pricey San Francisco? The 950 Center for Art and Education, a project that will be housed on the corner of Market and Turk streets in San Francisco, has gained a foothold against the odds.

Two years in the making, the center will provide permanently affordable performance facilities for the Lorraine Hansberry and Magic theaters, and create affordable space for art education organizations including Youth Speaks, the American Conservatory Theater and All Stars Project. Other groups, such as Lines Ballet, the Tenderloin Boys and Girls Club and others previously unsure whether they could continue to rent in the Tenderloin/SoMa area will get the chance to expand their performance and programming capabilities at the center.

Because the neighborhood is in such high demand in the wake of recent tax breaks and incentives designed to bring tech businesses to SF, it took the Tenderloin Economic Development Project, a part of the North of Market Neighborhood Improvement Corporation, at least two years to secure the property for the arts and education complex. Until very recently, the project’s fate was hanging in the balance, with many groups uncertain whether they would be able to remain in the city.

Three-quarters of the project space that TEDP had long set its sites on is located at 970 Market, and was initially owned by Lone Star, a Texas-based hedge fund. The remaining project space, at 950 Market, was under the ownership of the Thatcher family, known for philanthropy.

Initially, TEDP “had a deal with the hedge fund,” says TEDP director Elvin Padilla, but after property values rose, “they basically walked away from the negotiating table. The crisis moment was, who’s going to control the land – and will they collaborate with us?”

Padilla credits Gladys Thatcher, founder of the San Francisco Education Fund, as “the reason we decided to make the attempt [to acquire these spaces for the 950 Center] in the first place.”

When TEDP first pitched the idea to her several years ago, “she gave us her blessing we decided to make a go of it,” he explained.

Thatcher is trustee and former board member of the San Francisco Foundation, which worked alongside TEDP and the Rainin Foundation to secure the lion’s share of the land needed for the 950 Center, by facilitating a purchase of the 970 Market Parcel from Lone Star.

On June 7, the property was transferred from Lone Star to Group I, a San Francisco-based real estate development firm that Thatcher is friendly with. Now that the sale has gone through, the space will be devoted to the arts and education programming that TEDP had long envisioned. The San Francisco Foundation plans to facilitate development of the center through the creation of a new sponsoring organization that will be housed at Community Initiatives, a nonprofit.

While he is grateful for the community support, Padilla likened their quest to gain 970 Market to a climb up Mt. Everest.

A 2011 payroll tax exclusion zone introduced by Mayor Ed Lee vastly increased the property value in the mid-Market area. Although Lee had a soft spot for the 950 Arts and Education Center and even organized events to support bringing that use to mid-Market, his new policy left the project facing an uncertain future in a suddenly pricey strip along Market Street. “He doesn’t have any real authority over private sector transactions,” Padilla says, so all the Mayor could do was stipulate the city’s interest in using this land for “arts and education.”

The city doesn’t offer public funding for projects like 950 Center for Arts and Education. To “subsidize on the front end,” as Padilla puts it, the center will have to rely on the backing of individual investors, philanthropic groups and new market tax credits to reduce and eliminate the debt entirely, so the organizations that will be housed at the center don’t have to carry a mortgage.

In the end, it was only through the efforts of wealthy and connected individuals that plans for the center were nailed down rather than extinguished. “Mid-Market is going through a very rapid transformation,” says Dr. Sandra R. Hernández, Chief Executive Officer of the San Francisco Foundation. “We’re just lucky that Group I, the developer, shares this vision with us for an arts center.”

Looking back on the years of effort it took to piece the plan together, Padilla noted, “When we started this, it was before the tech boom. Now, the pressure on the real estate is many times what it was when we conceptualized the 950 project.”

That uncertainty finally came to an end for Padilla’s organization when Group I closed the deal with Lone Star on June 7. “That really [did] start the project officially,” Hernández says. “We’re now working with a number of the organizations that have expressed interest in having permanent space or accessible space for their programming or rehearsals for their theater production.”