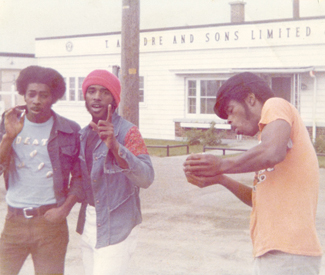 FILM The most popular feel-good documentary last year was Searching for Sugar Man, Malik Bendjelloul’s film about the somewhat mysterious Rodriguez — a talented singer-songwriter who recorded two major-label albums in the early 1970s, attracted no notice whatsoever, then disappeared from any public view. Unbeknownst to him (or to his bank account, since the royalties seem to have vanished more completely than he did), the records were a big hit in South Africa, where fans eventually tracked him down and informed him that he was, well, a star. So, decades after falling into obscurity, he was playing before large audiences he’d never known he had, and (via the film) getting new ones.

Sugar Man made you wonder how many other such stories might be waiting to be excavated. We’ve probably all seen or heard acts that deserved some commercial success, but never got close to it. More than ever, the musical mainstream seems more about marketing a package than promoting genuine, idiosyncratic talent. And examples of the latter slip through the cracks all the time, hopefully getting re-discovered later — for instance Nick Drake, sainted godhead of sensitive singer-songwriters, was barely a blip on the public-awareness horizon during his life. It was only after he’d died that the cult, and record sales, began to swell.

A Band Called Death is a similar story of recognition delayed so long that the principal vindicated character was no longer alive to enjoy it. Sons of a Detroit Baptist minister, David, Dannis, and Bobby Hackney were enamored with rock music from the time the family sat down to watch the Beatles play The Ed Sullivan Show in 1964. By 1971 they were calling themselves Rock Fire Funk Express — but exposure to live hard-rock acts like the Who and Alice Cooper convinced them to ditch the funk part completely. Their father’s tragic death (he was killed by a drunk driver while taking an injured coworker to the hospital) hit all of them hard, but especially guitarist David, who had a spiritual awakening of sorts and insisted their band be named after what he now considered “the ultimate trip:” Death.

It seemed a career-killing moniker if ever there was one. (Though by 1983 Orlando’s death metal pioneers would have no trouble using the same name.) Nor did the trio’s loud, fast, heavy sound — their rehearsals drove the neighbors nuts — make sense for an African American outfit in a city where Motown ruled. Though their parents had always encouraged them, nearly everyone else took a “Why are you playing that white boy music?” stance. Nonetheless, they found a supporter at local studio-music publisher Groovesville Records, recorded some tracks, and shopped them around to every imaginable label here and abroad. After innumerable rejections, they seemingly hit the jackpot with Columbia Records prez Clive Davis, who was eager to sign them … if they’d just change that name. As the band’s “visionary,” however, David Hackney was unwilling to budge on his total “concept.” The offer was withdrawn.

Defeated and exasperated, the brothers accepted a relative’s invite to stay with him in Burlington, Vt., and wound up relocating there — but when they put up Death posters around town, the unamused local cops assumed this was some sort of gang-activity threat. That was the last straw; Dave reluctantly agreed on a name change, to the 4th Movement. In that form they played some gigs and recorded a couple albums — but their new, more overtly spiritual emphasis didn’t play well with rock audiences who really didn’t want to flick their Bics to lyrics about Jesus Christ.

A man with a plan — but no backup plan — Dave eventually slunk back to Detroit, and was dismayed when his brothers moved on musically, experiencing some success with a reggae band called Lambsbread. Death wasn’t just forgotten; it had never really been noticed. Its only material issue was a self-distributed 1974 single of “Politicians in My Eyes” b/w “Keep on Knockin'” that had scored just token local radio play. But three decades later some of its 500 pressings started surfacing on underground DJ’s turntables, rare-record collectors’ wish lists, and on eBay (at $800 a pop). What could be a more fascinating enigma and find than an unknown African American group making music that was precociously protopunk (with some psych influences) well before even the Ramones’ first album in ’76?

Eventually the surviving members saw their ancient masters released at last, and toured clubs as a reformed Death with Lambsbread’s guitarist taking cancer-felled Dave’s place. It was all made sweeter by the fact that three of Bobby’s sons now had their own band, named Rough Francis after their late uncle’s last recording pseudonym.

A bit overlong, the documentary nonetheless ingratiates with its surprising wealth of home-movie footage, commentary from the very genial Hackney clan, and testimony from latter-day fans like Henry Rollins, Jello Biafra, Kid Rock, and Questlove.

A BAND CALLED DEATH opens Fri/5 at the Roxie Theater.