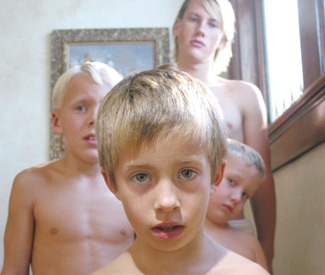 FILM/LIT A few weeks before our scheduled interview, Laura Albert mails me copies of 2000’s Sarah and 2001’s The Heart is Deceitful Above All Things. Inscribed on Heart‘s title page is a note: “Thanks for being available to revelation.” The volumes are signed “Yours, LA and JT” — the latter, of course, referring to JT LeRoy, the identity under which Albert penned both books.

That secret’s been out since late 2005, and has been dissected over and over. It even inspired a Law and Order episode. LeRoy, and his fantastically tragic back story (just out of his teens, he’d survived drugs, homelessness, and prostitution en route to becoming the lit world’s hottest wunderkind), were Albert’s creations. She was the true author behind the best-sellers listed above, plus 2004’s Harold’s End, dozens of magazine articles, an early script for Gus Van Sant’s Elephant (2003), and numerous other works. (Meanwhile, the androgynous “JT” that had been appearing in public was actually the half-sister of Albert’s then-partner; she wrote her own tell-all in 2008.) On Albert’s website, there are tabs marked “Who is Laura Albert?” and “Who is JT LeRoy?” Both link to Albert’s biography.

Years have passed since l’affaire LeRoy, and Albert has moved through the experience in her own way. (Her business card lists her as “literary outlaw.”) Later this summer, Sarah will be reissued as an ebook, with a fairy tale-inspired cover by artist Matt Pipes. Albert also is working on her memoirs (though she doesn’t like to use the word “memoirs”), and tells me there’s a documentary forthcoming from Jeff Feuerzeig, who made 2005’s critically-acclaimed The Devil and Daniel Johnston. This weekend, Asia Argento’s 2004 adaptation of The Heart is Deceitful Above All Things screens as part of the Clay Theatre’s midnight-movie series, with Albert and producer Chris Hanley in person, plus Argento via Skype.

Sitting in her San Francisco kitchen, Albert eyes my tape recorder and admits she’d rather focus on the film, not JT — though it’s a topic that inevitably arises. Argento, Albert says, encountered Heart the way many LeRoy readers did, via word-of-mouth recommendation.

“She read the book and she didn’t know anything about JT. At the same time, a small publisher was putting out the book [in Italy], and they wanted to bring JT over,” Albert recalls. “It was a weird coincidence. They were putting on an event, and they wanted to get someone to read. They had contacted Asia, and she already knew about the book, and she wanted not only to do this event, but to make the movie. It’s funny because I thought Sarah would be the first [to become a film], because it was already optioned by Gus [Van Sant]. But Asia moved really fast. We went over to meet her, and I had turned down a lot of people. My feeling was, it’s my baby and I’m giving it up for adoption, and I saw that this was someone I could give my baby to.”

Argento, the daughter of famed Italian horror director Dario Argento, is best-known stateside as an actor; previous to Heart, her directing experience was limited to short films and 2000’s flamboyant Scarlet Diva. Once she decided to helm the movie, her decision to star as the free-spirited, needy, sometimes-cruel single mother of the story’s young protagonist was an obvious choice.

“I had concerns about that, how much she would take on the role, how much it would become her. It’s ironic, because I had given myself over completely to Jeremy, to JT, to Jeremiah,” Albert says. She pauses. “Did you see that French film, about the guy who assumes different characters?”

“Yeah! It really was transformative to me. There’s a scene where someone asks [the main character], ‘Why are you still doing this?’, and he makes reference to the act of giving yourself over completely. And that was it. I gave myself over completely. I did not break character. You know how, in that movie, he’ll do anything? He’ll kill someone! He’s in it. Most people don’t know what that’s like. And that was it. I will never apologize,” she says, firmly. “We’re talking about art. Nobody was harmed in this, really. I didn’t really scribble that far outside the lines. Everything was labeled ‘fiction.'”

At her mention of an apology, I have to ask: does she feel like people demanded one?

“People like to give themselves a lot of credit for how vanguard they are. I can’t tell you how many people I’ve had tell me, ‘Warhol would have loved it!’ — including people who were close with Warhol,” she says. “I think it revealed more about other people and what they could accommodate, and what they put on the work, than it does about me. If you have a personal relationship with JT, then that’s a conversation between you and me. I put my email [in the books], and I really did have a connection with the fans because I grew up in the punk scene, and I wasn’t into hero worship. The problem was — psychologically — I wasn’t able to do that. It wasn’t like [adopts goofy voice], ‘Gee, how do I burst forth onto the literary scene? I know! I’ll create a little boy!’ No. It wasn’t like that.”

As we talk, Albert makes references to her own troubled youth: surviving abuse, living in a group home, being institutionalized. Amid the tumult of her teenage life, she would “call hotlines — I don’t know what I would talk about, but it was the only time I could feel. I would give myself over to another being, and it was always a boy. So when I hear people say, ‘I’m gonna do what you did,’ it’s like, good luck. For me it was created the way an oyster creates a pearl: out of irritation and suffering. It was an attempt to try to heal something. And it actually worked, and it did so for a lot of other people. The amazing thing is, now I can be available to people.”

We’re delving more into her work (“I didn’t do anything new — writers have always been using combinations of pseudonyms and identities,” she points out) when the doorbell rings; it’s a Comcast technician here to see about Albert’s Internet connection. We move to her office, which features a wall collaged with photos and several filing cabinets full of archives — material she’s letting Feuerzeig use in his documentary.

But it’s not a room completely given over to the past. It’s also where Albert works on her new projects (besides her memoirs, she’s writing screenplays — building off her experiences working on Deadwood with David Milch), and stashes new mementos, including a program from a recent Brazilian rock opera entitled JT, A Punk Rock Fairy Tale.

Before I leave, she gives me a copy of a New York Times article from 2010 entitled “Life, In the Way of Art;” its subjects include Joaquin Phoenix, still smarting from the backlash after his faux breakdown in I’m Still Here. The director of that film, Casey Affleck, cites a line from a Picasso quote that Albert emails to me in full the day after we speak: “We all know that art is not truth. Art is a lie that makes us realize truth, at least the truth that is given us to understand. The artist must know the manner whereby to convince others of the truthfulness of his lies.”

She’s just as frank over email as she is in person. “It’s OK with me if someone doesn’t like my writing. But they shouldn’t try to tell me how I’m obliged to present my work,” she writes. “When I talk about my personal background, I’m not attempting to somehow bestow legitimacy to what I’ve written — anyone should be able to do what I did. My life history doesn’t matter and isn’t being offered as any kind of excuse.”

I think back to something she said in her kitchen — a simple, powerful summation of a story that will never not be complicated. “JT was my lifeboat. You loved him? Well, I loved him more.”

THE HEART IS DECEITFUL ABOVE ALL THINGS