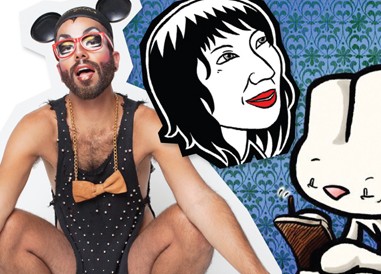 It’s been a big year for queer comics. A movie based on a lesbian comic book, Blue is the Warmest Color, swept the top prizes at Cannes. The first textbook history of queer comics No Straight Lines was released by local hero Justin Hall, and snagged the Lambda Literary Award for Best Anthology. Heck, even Green Lantern went queer in “Earth Two,” and there was a gay wedding in Archie’s hometown, Riverdale. Here in the Bay, of course, comics have been queer for decades: from the pioneering work of Mary Wings and Lee Marrs in the 1970s to a lively slew of young upstarts, eager to expand the genre. Take, for example, this year’s packed “Batman on Robin” show, curated by Hall and Rick Worley, which imagined the Dynamic Duo in comic contortions that had many saying, “Shazam!”

BONUS! Legendary groundbreaker Lee Marrs just sent her picture to us, and it may be our favorite yet: