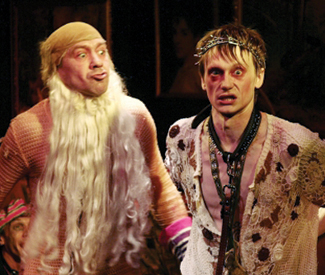 THEATER Emerald green rooftops and gold domes enliven the skyline of Omsk, a provincial city and former Soviet industrial hub of roughly one million people, located at the intersection of two Siberian rivers: the wide, island-populated Irtysh and the smaller, swifter Om. The latter gave its name to the town, which grew from a fort established at the meeting point of the rivers in 1716, back when this was the disputed frontier of the expanding Russian empire.

But now it’s the last week of May 2013. The fort is long gone. In its place stands the Lighthouse, a large white hotel-cum–shopping mall festively crowned with neon Cyrillic lettering. Rounded at one end and peaked with towers, it drolly resembles a cruise ship in port. The sun is still out at 10 p.m., and a gusty wind rolling off the plains churns the warm air pleasantly.

Sleepy though this town seems by comparison with St. Petersburg, Moscow, or even Yekaterinburg — the three other stops on a four-city tour I joined last month, in conjunction with a US-Russia theater dialogue developed by the Center for International Theatre Development — Omsk turns out to be not so remote in many ways. For one thing, it’s a hotbed of theatrical activity at the moment, with the biennial Young Theaters of Russia Festival in full swing. Nor is the Russian empire entirely a thing of the past, as tonight’s provocation by a troupe from the former Yugoslav republic of Slovenia makes plain enough.

Damned be the Traitor of His Homeland! — a production of Ljubljana’s internationally renowned experimental company, Mladinsko Theatre — is a no-holds-barred attack on jingoism, xenophobia, and the false allegiances they promote, as well as on complacency in the face of recent history, government corruption, and social decay. Taking its title from the last verse of the former Yugoslav national anthem, it gleefully lobs profanity, insult, accusation, nudity, a flurry of gunshots, and lots of local dirt (dug up for the occasion) at its unsuspecting audience — who frequently find themselves unnaturally exposed and singled out under merciless house lights.

It begins quietly enough: its ten cast members onstage, reclining on the floor and clutching musical instruments, looking like a freshly slaughtered marching band — until the sound of breathing through a tuba begins a general stirring that quickly escalates into an instrumental movement titled, “Won’t Go Against My Brother.” Next, the cast introduces itself with ribald, pointed, self-effacing humor through their own imagined obituaries — each of which makes explicit reference to an imaginary production of “Hey, Slavs!” (in fact, the title of the Yugoslav anthem) directed by acclaimed Bosnian Croatian bad-boy director Oliver Frljic (in fact, the production’s own director).

Cycling through various loosely related scenes, all built from improvisations, Damned delivers its pleas and gibes with a potent combination of muscular staging, lively wit, intrepid honesty, and moments of wrenching beauty. It produced some walkouts the night we saw it — many more the night before, reportedly — but its themes were undeniably urgent and its manner both raw and sure. This was all before Edward Snowden went public with details of the NSA’s PRISM program or had arrived in Moscow from Hong Kong en route to some hoped-for political asylum abroad. But there was no denying the implications for any Americans in the audience as well.

Omsk has nine large municipally funded or federally funded theaters, leaving far behind most American cities of a comparable or even much larger size. And in short it, and the Festival, had much more to offer beyond this one highlight, even if not as explicitly provocative or political in nature. (Those curious to learn more should know that Chris White, artistic director of Mugwumpin and the other San Franciscan on the tour, has written a series of reports on HowlRound with many further details).

Highlights in Moscow included an exquisite production from leading director Dimitry Kymov (whose collaboration with Mikhail Baryshnikov, In Paris, came to Berkeley Rep last year). Based (like In Paris) on the work of famed Russian short story writer Ivan Bunin, Katya, Sonya, Polya, Galya, Vera, Olya, Tanya … is an original production crafting a series of oddball, sometimes grim love stories into a kind of high art twist on Grand Guignol.

Also utterly memorable was the best production of Hamlet I’d ever seen —staged in a ramshackle venue whose lobby was stuffed with a vaguely foul-smelling array of garage sale toys, Soviet kitsch, and other odds and ends, and whose stage was a small, low-ceilinged black box packed into the aisles with what appeared to be mainly teens. The theater and the production belong to famed Russian director and playwright Nikolay Kolyada. Somewhat infamous after his endorsement of Putin in the last elections (which points to one way in which Russian theater, offstage, can be nothing if not political), Kolyada delivers a decisive reading of Shakespeare’s play as a bald, barbaric parable of power — in an incredibly meticulous, distinct, and forceful style whose macabre wit brought to mind some weird admixture of Richard Foreman, Tim Burton, and Terry Gilliam. Whatever else it demonstrated, it showed the Bard’s play as utterly, repulsively, and compellingly contemporary — something too rarely accomplished in any language. *