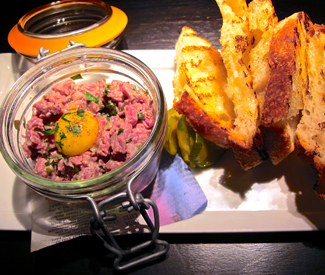 Due to open any day now in the former El Delfín space on 24th Street is La Movida (3066 24th St. SF. www.lamovidasf.com), a brand-new project from Michael Meadows. While its name sounds like a hot discoteca (hits hits hits!), it’s actually a wine-focused bar, with 12 wines on tap (almost all from California) and 20 by the bottle, plus three local craft beers on tap, including one from local homies Cerveceria de MateVeza. You can graze on some small plates in the evening, like charcuterie, cheese, a few different flatbreads, and chorizo corndogs (yeah, those sound hella good). Since many ingredients are being sourced from the ‘hood, keep your eyes peeled for items like bread pudding made with Dynamo Donuts (yes, please) — and tamales from La Palma are also looking likely. During the day, you’ll be able to order sandwiches from Jeff Mason of Pal’s Take-Away, who moved the business over from Tony’s Market, which means you can now actually find a seat while sinking your choppers into one of Pal’s killer sandwiches, how novel. There will also be some pop-ups on Tuesday evenings, stand by. The space is outfitted in a cheerful orange, and El Delfín’s murals have been cleverly repurposed to form the tabletops. Hours for Pal’s will be Mon–Fri 11am–3pm, and for La Movida Sun–Thu 4:30pm–11pm and Fri–Sat 4:30pm–12am.

The owners of The Sycamore in the Mission have opened a second project in SoMa, The Willows (1582 Folsom, SF.) in the former Mercury Lounge. The bar menu features handcrafted cocktails, plus a “beer den” with 12 taps of rare beers (you can currently order up the Hitachino Nest Commemorative Ale from Japan). Fans of the menu of American classic vittles at The Sycamore will find a similar spread here, plus new additions like fried chicken and meatloaf. Some of you SF old-timers will remember the location as Hamburger Mary’s, so you’ll get the “Mary’s burger” hat tip on the menu. When you’re not busy stuffing your face, you can pretend you’re on the prowl for dinner with the Big Buck Hunter videogame, plus there are pinball machines and a pool table. Or just jam something on the old-fashioned jukebox while you enjoy your adult beverage. Hours are Sun–Thu 11:30am–12am and Fri–Sat 11:30am–2am.

And this week we mean it, literally. On Thursday June 27th, chef Jonny Becklund at Mr. Pollo (2823 Mission, SF) in the Mission is offering a very, um, shall we say sack-tastic dinner called Balls Deep. Hey, if you need a reason to throw (or attend) a four-course testicles dinner, why not do it in honor of Pride? You’ll be able to experience this ballsy dinner for $35 per person at two seatings: one at 6pm and another at 8pm. So, you in? Don’t leave ’em hanging. Reservations can be made by calling 860-912-9168.

Fans of beef tartare — you know who you are — may want to check out the new MKT Restaurant–Bar at the Four Seasons Hotel (757 Market St., Fifth Floor, SF.) the next time a hankering for some raw beef hits. (Hey, it happens.) Chef Mark Richardson’s version here is nicely executed: Five Dot Ranch beef is seasoned beautifully, with a raw Red Hill Farm egg yolk on top that you have the honor of swirling into the beef yourself. You can slather the tartare on the grilled Acme bread, but I recommend a forkful of it right from the Weck jar to fully appreciate its silky and savory charms.

Marcia Gagliardi is the founder of the weekly tablehopper e-column. subscribe for more at tablehopper.com. Get her app: Tablehopper’s Top Late-Night Eats. On Twitter: @tablehopper.