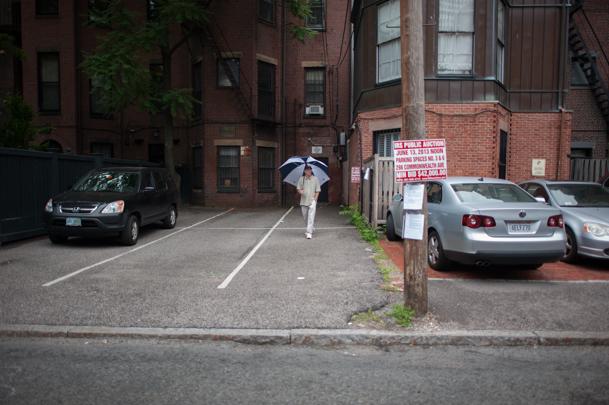 Happy Father’s Day! Be good to your dad (assuming he’s alive/you know who he is) and enjoy your kids (assuming you have any/know who they are).

A remarkable story crossed my monitor this week. From back in the sacred Motherland of Massachusetts. Apparently, a pair of tandem parking spaces were auctioned off behind a toney Commonwealth Ave (Boston) condo for a whopping 560K–they’re shown in the photo. That’s over a half a million dollars in prime real estate yer gazing at.

Bid up from a sort of reasonable 42K and sold to a party that allegedly owns three spaces there already, this is the kind of story that makes one’s eyes glaze over in amazement. As primo as the location is, that tiny and stained bit of asphalt you’re looking at is not worth that price under any circumstances.

As that part of Boston is tightly zoned, it isn’t like it was bought to expand a brownstone. Nope, this is conspicuous consumption run completely amok or as a friend of mine back there put it, ”this could only have happened to people for whom money has no meaning”. (I suspect that the purchase was made as a “business expense” for a corporation, more to be revealed).

For 560 grand, you can still buy a modest home in Boston’s most desirable suburbs (all of which have better public schools than Boston and are cleaner and not plagued with unbearable traffic). And the property is but ten minutes on foot from downtown and the business district, cabs and car services are plentiful, therefore, why bother? As a possible long term investment? (Not a great idea as you will see).

This neighborhood, the Back Bay, was the first place I had my own digs. Adjusted for inflation, that apartment should go for about 420.00. It is now a million dollar and up condo and what was it? One gigantic room, likely the dining room of a three story home back in the 1800’s. And I still have friends in that neighborhood. Tellingly, all of them have been there at least 25 years and they could never afford it now.

By pricing all but the top of the top out of what once was an artist friendly neighborhood, the same neighborhood has the ripple effect of driving real estate values in adjacent neighborhoods past reason. Boston and San Francisco–joined at the hip by being the satellite cities to America’s twin powerhouses–are now unaffordable.

A piece in the same paper that ran this story last year said it all. People aged 35-54 –which used to be an enormous demographic in Boston–no longer live there in large numbers. After university they just up and go because first jobs don’t pay enough to raise the scratch for a down payment. When a slab of concrete not even big enough to be a bedroom in a rooming house goes for 560K, it says that “what the market will bear” is not applicable.

This isn’t “free market capitalism”, it’s “crapitalism”. The laws of supply and demand have been so perverted by so few having so much, they almost don’t apply anymore. And my beautiful hometown–once a funky seaport with the best local music scene outside CB’s/Max’s–is now an overly exclusive playpen for folks that have brought back the Brahmin Age, only on ‘roids. Same as in SF—two small peninsulas whose essential character is being clobbered by venal plutocrats. Crapitalism couldn’t exist without tacit aid from the government–in SF, it’s in the form of tax breaks, in Boston, tax free academia is swallowing their city whole, reducing the amount of living units and artificially raising land value. That isn’t “supply and demand”.

The utlimate irony of this ridiculous transaction is that the Back Bay, like the Marina, is atop a landfill. The Charles River already overflows its banks and floods the basements of these expensive edifices more than it used to–so the parking spaces in question may be useless a fair amount of the time (of course, crapitalism being what it is, MA taxpayers will surely be stuck for the bill of seawalls and the like).

Bailouts, cronyism, loopholes–instead of an economic boom, we have Marie Antoinette style madness in our major cities. Pretty pitiful.