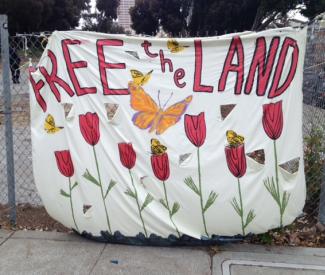 “#GeziGardens, occupied permaculture farm in SF is being raided by 100’s of riot cops right now!” read the Gezi Gardens Twitter at about 2am last night.

The site, formerly known as Hayes Valley Farm, has been occupied since June 1 by a group calling themselves “Free the Land” or “Liberate the Land” after Hayes Valley Farm moved out quietly on May 31, as part of a conditional use deal with the city that allowed the farm to operate until the city-owned site is developed into condos (including 40 units for low-income residents).

The purpose of the occupation, one of the occupiers told me, was to bring attention to the loss of green space in the city, to oppose development of more high-end condos (including those on the site) in the face of soaring evictions and homelessness, and to stand in solidarity with protesters in Turkey who were occupying Gezi Square to prevent its slated demolition and redevelopment into a mall.

(Gezi itself was stormed yesterday by riot police)

Video posted to the Liberate the Land Facebook page shows a treesitter falling from his perch as police officers attempt to dismantle it, as well ass this picture of a police cherry picker approaching the perch:

Also on the page is a picture of a man called Mark with a swollen black eye, and the caption, “Mark’s eye after being punched by the SFPD while in the cage after arrest and being brought down from tree sit.”

Liberate the Land issued this message this morning:

Folks are gathering at Patricia’s Green on Octavia Street between Hayes Street and Fell Street now after a night time lightning raid by SFPD on #GeziGardens, the former site of Hayes Valley Farm on Oak and Laguna Streets, with guns drawn. Folks who just went through the raid and supporters need food, a kitchen, sleeping bags, banner making materials, paint, etc. Come gather with us today, meet up for a discussion at 6pm, and definitely plan to come here Friday at 6pm for a reconvergence. Let it build.