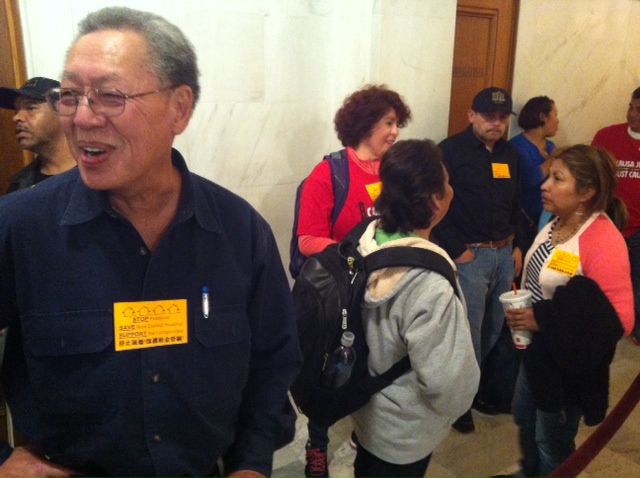 The San Francisco Board of Supervisors today voted to approve compromise legislation that will allow more than 2,000 tenancy-in-common homeowners to convert to condominiums in exchange for a 10-year moratorium on the city’s current condo conversion lottery that now allows 200 conversions annually.

Approved by a veto-proof 8-3 majority after some last amendments were shot down by the six supervisors who most steadfastly supported the version that Board President David Chiu took the lead on crafting, this was a big victory for tenant groups who strongly opposed the original legislation, which did not include the moratorium and other restrictions.

“It’s great. We’re going to see a significant drop in condo conversions in the future. All of us tenants are very happy,” San Francisco Tenants Union head Ted Gullicksen told us after the hearing, which was packed with tenant supporters.

Sup. Mark Farrell, who sponsored the original legislation, decried how divisive the issue had become, criticized the approved version as deviating from his original intent of helping TIC owners in exchange for a fee that would help fund new affordable housing, and said, “This doesn’t need to be a zero sum game.”

But Chiu and the five supervisors who supported his version – Jane Kim, Norman Yee, David Campos John Avalos, and Eric Mar – noted the finite number of rent-controlled apartments in the city and the need to protect them from being converted into condos.

“How do we balance the needs of tenants who fear being evicted with TIC owners looking for relief?” Chiu said of the balance he aimed to strike, which he continued to tweak with new amendments today, including allowing TICs with all owner-occupied units to move forward if the legislation is challenged in court, an event that would otherwise freeze all condo conversions until the lawsuit is resolved.

Sup. London Breed wanted even greater flexibility in that so-called “poison pill” aspect of the legislation, which tenant groups had insisted on to prevent the bypass from going through even if the moratorium was challenged. Breed proposed allowing condo conversion applications to proceed for a year after a lawsuit was filed, but Chiu said that would let TIC owners convert to condos while challenging other aspects of the legislation, such as the lifetime leases for tenants in converted buildings.

Breed and Sup. Malia Cohen, who privately and rather grimly conferred with one another and sometimes Chiu before the item began a little after 4pm, were clearly the two swing votes on the question of whether the legislation would reach the crucial eight-vote threshold needed to override a possible mayoral veto. Mayor Ed Lee has refused to take a position on the issue, leaving both sides in the dark.

But after the motion to insert Breed’s amendments failed on a 5-6 vote, the board voted 8-3 to approve Chiu’s version of the legislation, with Sups. Farrell, Scott Wiener, and Katy Tang opposed. A subsequent vote on a version of the legislation backed by Farrell and Wiener – which contained a weaker poison pill and more flexible owner-occupancy provisions – then failed on a 4-7 vote, with Breed joining the three dissenting supervisors.

Underscoring this legislation was what some supervisors called a “housing affordability crisis” in San Francisco, an issue that Mayor Lee was asked about at the start of the meeting, which he deflected by claiming “our city has some of the toughest anti-displacement laws in the nation.”

We’ll analyze that discussion and offer more details on the condo conversion debate and the politics behind it tomorrow in the space, so check back then.