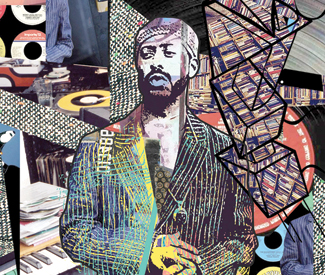 SUPER EGO One of the best yet worst-kept secrets of the plastic fantastic SF underground has been Vinyl Dreams, a pop-up record shop in DJ Mike Bee’s living room. It’s been a must for visiting headliner DJs — and those of us who get all giddy at the mere flash of a fresh vinyl platter gingerly unsleeved in a private space. I’ve long yearned to write about this parlor of grooved delights, where Mike Bee would happily try to get his hands on any underground tune one desired. But a girl must have her secrets. And I’m not one to gossip!

Wow, it actually hurt me to type that last thing. Well, out of the living room and onto the streets: at last, Mike, who is one of the sweetest people ever and a killer decksmith himself, has opened an official hot chops shop in Lower Haight called, yes, Vinyl Dreams (593 Haight, SF. www.tinyurl.com/vinyldreamssf). Go there and live the vinyl dream! It’s tucked in the cozy basement spot formerly occupied by the legendary Tweekin Records (and the first iteration of Black Pancake, now closed), so there’ll be a lot of twitterpating rave ghosts hanging at the record racks. Eeeeeeeee.

This new first Thursdays joint at the Showdown sounds real cute. Dancehall, riddim, rap, tropical bass, and downtown Latin twists are all on deck — as are DJs Tom Doane and Yoni Klein, plus this month’s slammin’ guest B Majik, a.k.a. Sergio Flores.

It’s been a minute since we heard from brilliant hypnotic electronic looper Alex Willner. The last time he was here, supporting 2011 album Looping State of Mind, he came with a full band and blew the crowd away with a 10+ minute version of seminal “Over the Ice.” (Alas, a bunch of talky gay bears kept breaking the spell.) This time around he’s performing a special live ambient set on all-analog audio and video equipment. (Gay bears, hush!)

Yes! Wonderful beat konducta Madlib takes to the tables to reprise the ecstatic golden age of Zambian 1970s rock. Get into it, it’s afreakin’ amazing. Bandleader Emmanuel “Jagari” Chanda of seminal Zamrock outfit WITCH will be there, too, for his first appearance in North America ever, so can’t miss.

Saw these two NYC cats — whose actually epic, 12-minute “Rushing to Paradise (Walking These Streets)” is a soundtrack for life — tear down the house-house a couple years ago at LA’s infamous A Party Called Rhonda, and often still recall the acid-happy, bass-bliss moment I couldn’t stop screaming on the dancefloor.

The sublime Voices from the Lake, Monolake, and Deadbeat perform at this casino-themed party upstairs in the stunning upstairs Lodge Room of the Regency. This is cool, OK. Also cool is that it’s a fundraiser for the Gray Area Foundation for the Arts’ Creative Code Education program, which helps bring artists and performers to the coding table, expanding everyone’s digital-magical horizons.

Woah, everybody’s favorite unpretentious, old-timey hang in the Mission is almost as old as me. Join its awesome cast of regulars — and others who love fried appetizers, drink specials, and wicked Tin Pan Alley-type piano-playing — in a big “hats off” to this gem.