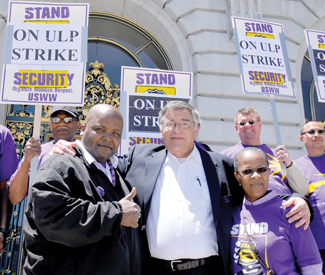 To qualify for his job as a security officer, Jerry Longoria had to obtain a license, undergo a background check, and take a drug test. He’s required to wear a suit to work. He’s stationed at a downtown San Francisco high rise that houses Deloitte, a multinational consulting, finance, and real-estate firm that reported $31.3 billion in revenues last year. His employer is Universal Protection Services, a nationwide security contractor with a slick online marketing pitch emphasizing that all guards are “electronically supervised around the clock,” and “kept accountable on the job through our 24-hour command center.”

If an intruder showed up at his office building brandishing a firearm, it would be Longoria’s problem; that’s the job. Nevertheless, he says he doesn’t earn enough to cover rent for an apartment in San Francisco. Instead, he stays in a single room occupancy hotel near Sixth and Mission streets, an area known for a high rate of violent crime. Walking home still wearing the suit makes him stand out on the street.

He’s lived in the 150-unit building, which has shared bathrooms and a shared basement-level kitchen, for 11 years. “It’s affordable for me, and it allows me to be closer to work,” he explains. He can’t afford a car, and says a public transit delay could prove disastrous if he relocated outside the city. “If you’re late to your post, you get fired.”

At press time, about 7,000 security officers throughout the Bay Area and Los Angeles were gearing up for a strike that could begin any day. Members of United Service Workers West, affiliated with Service Employees International Union, authorized their bargaining committee to call for the work stoppage because officers have been without a contract since the end of 2012.

The starting wage for a security officer is $14 an hour in the city, which comes to slightly more than $29,000 a year before taxes. In some places that would be sufficient to meet basic needs. In San Francisco, where the median market rate on rental units recently peaked above $3,000 a month, it doesn’t go very far. “With the cost of living here in San Francisco, $14 an hour is simply not enough to make ends meet,” Kevin O’Donnell, a USWW spokesperson, told us.

The security officers’ threats to strike coincided with a second worker action in the Bay Area last week. Despite lacking any form of union representation, Walmart associates from stores in Richmond, Fremont, and San Leandro affiliated with the nationwide organization OUR Walmart joined 100 employees from across the country in walking off the job and caravanning to Bentonville, Arkansas to raise awareness about their poverty-level wages and insufficient benefits at Walmart’s annual shareholders’ meeting. But first, they paid a visit to the Four Seasons in downtown San Francisco, which houses the 38th floor penthouse apartment of Yahoo CEO Marissa Mayer, a Walmart director.

Despite seeking full-time working opportunities and staying with the company for years, a handful of associates we interviewed said they can’t earn enough at Walmart to cover basic needs, so they rely on government assistance or help from extended family to make ends meet. Some said they had witnessed their coworkers get fired after participating in OUR Walmart activities.

Walmart associates in the Bay Area are in a considerably more precarious situation than the security officers, earning lower hourly wages. But in the pricey Bay Area, security officers, Walmart employees, and scores of other low-wage private sector workers all share something in common. Despite reporting to work every day and working long hours in many cases, they’re forced into impoverished conditions due to economic circumstances, while a middle-class existence remains far out of reach.

ABM Security and Universal Protection Services are the largest employers in the private security contractor industry; in the Bay Area, the majority of guards are stationed at office buildings in downtown San Francisco. On May 30, Supervisors John Avalos, David Campos, David Chiu, Jane Kim and Scott Wiener all voiced support for the guards at a rally outside City Hall. “Better working conditions for security officers mean more stable, family-supporting jobs, less turnover, and more ability to handle challenges at work,” Avalos said.

Matt Roberts has been working as a security officer for years, and originally moved into his unit in a San Francisco SRO in a financial pinch. “I figured, I’ll get out of this rut eventually. And here I am, seven years later, still paying $1,000 a month for a space that’s really not much bigger than a walk-in closet,” he told us. Roberts was terminated recently, and believes it’s because he spoke up to his site director about workplace issues his fellow guards felt needed to be addressed.

In Roberts’ view, the situation he’s found himself in is reflective of the broader erosion of the middle class, which is particularly acute in an area with a soaring cost of living. He was born and raised in San Francisco’s Crocker Amazon district, with a father who worked as a firefighter and a mother who worked as a clerk typist at the Cow Palace.

“They were able to achieve the American dream,” he said. “They had a house, they paid their mortgage off in 25 years, they were able to send me and all my three siblings to good schools. I realized when I was still in my 20s that I’m probably going to be a renter the rest of my life. The American dream is totally eclipsing my generation.”

Keven Adams, a security officer of 23 years who lives in Oakland, also attended the City Hall rally on May 30. “We’re fighting for wages, health care, and stability in the workplace,” Adams said. “We’re in a city we love so very much, but the community and the middle class is shrinking.” Adams said he was once held at gunpoint for four hours during a work shift. He’d love to live in San Francisco, he said, but can’t afford it.

According to a June 3 media advisory, unions throughout the Bay Area were preparing to demonstrate support for the security officers as they geared up to strike. “The support could come in the form of workers attending rallies, non-violent civil disobedience or perhaps even non-security workers refusing to cross picket lines,” according to USWW, “and walking off their own jobs in solidarity.”

Among the small group of protesters who had assembled on the sidewalk far below Mayer’s San Francisco penthouse on May 29 were associates who had taken the drastic and unusual step of going on strike from Walmart — the nation’s largest private employer. Clad in bright green shirts and waving signs, they chanted, “stand up, live better,” a play on Walmart’s slogan, and also, “What do we want? Respect.”

Dominic Ware, who works part-time at a Walmart in San Leandro, led chants and sounded off on a megaphone about the need for greater respect in the workplace. Ware, who’s been involved with OUR Walmart activities on a national level, said he earns $8.65 an hour and stays with his grandmother, since his paycheck isn’t enough to cover rent. He estimated that roughly half his earnings go directly back to Wal-Mart, where he purchases groceries and other basic items. Asked what motivated him to strike, Ware mentioned his daughter, who turned eight on June 1. “What if she has to work there some day?”

He added that some elderly colleagues were experiencing problems such as being unable to get a shift changed so as to catch a bus home at the end of the night. Another one of his coworkers was let go after it became clear to management that he was participating in OUR Walmart activities, Ware said.

While only a tiny fraction of Walmart’s 1.4 million workers took action to strike, their campaign appears to resonate in high places. A report recently released by the Democratic staff of the U.S. House Committee on Education and the Workforce seized on Walmart’s low wages, emphasizing that so many of its workers are forced to turn to government assistance that it is resulting in a collective drag on taxpayers.

“Rising income inequality and wage stagnation threaten the future of America’s middle class,” the report notes. “While corporate profits break records, the share of national income going to workers’ wages has reached record lows. Walmart plays a leading role in this story. Its business model has long relied upon strictly controlled labor costs: low wages, inconsiderable benefits and aggressive avoidance of collective bargaining with its employees. As the largest private-sector employer in the U.S., Wal-Mart’s business model exerts considerable downward pressure on wages throughout the retail sector and the broader economy.”