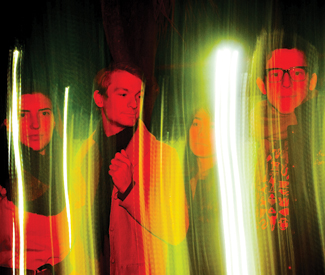 TOFU AND WHISKEY Trails and Ways have zigged when others zagged. Though in reality, the band’s process is becoming more in line with the path many underground musicians take to create and distribute work in 2013. It’s avoided traditional labels, instead choosing to release a record through a Tumblr-based community project, and before that generated intense web interest with original singles, clever covers, and inspired remixes, building a reputation as a talented crew of globally inspired dream poppers.

And that windy route has paid off. The melodic Oakland quartet, which was named one of the Guardian’s Bands on the Rise earlier this year, will play its biggest headlining show yet this week, Fri/7 at the Independent (9pm, $12, 628 Divisadero, SF. www.theindependentsf.com). It’s part of its first full US (and Canadian) tour. All of this is in celebration of a record that’s been buzzed about since the first hints were dropped a year or so ago: the Trilingual EP is here.

If you’ve been following the band’s trajectory, you’ve heard many of the tracks before. Five-song Trilingual begins with faraway wind chimes and sturdy hand-claps, kicking off new single, “Como Te Vas,” which then builds into a electronic dance pop track with catchy guitar hooks over island synths and layers of echoing Spanish vocals. It bleeds directly into championed early released “Nunca,” lovely and moody “Tereza,” which ends with the sounds of rolling waves, along with previous single, the bossa nova beat driven “Border Crosser” (which supports the National Network for Immigrant and Refugee Rights) and bubbly “Mtn Tune.” A few of the tracks showcase that two female-two male vocal counterpart dynamic of Trails and Ways, others spotlight and highlight one or two voices — all strong in their own right.

“Some of the songs we put out last year but had never given them a home. It’s our debut of songs written and recorded together as this band,” guitarist-vocalist Keith Brower Brown tells me. “Working as this four-piece changed how and what we do to the core. Before we went on this first major tour, we wanted to bring together our work so far — and new material — into this physical object to tour behind, a declaration of who we are and what we’ve done as a band.”

Although the foursome — Brower Brown, bassist Emma Oppen, drummer Ian Quirk, and guitarist-synth player Hannah Van Loon — initially considered expanding Trilingual into an LP, they decided not to force the additional tracks, to let the work settle and grow organically. “We realized that we never want to rush a full-length out the door. A lot of things have happened really fast for us — especially given that we’ve just been doing all this on top of demanding jobs and other projects.” (That ends soon; two of the four quit working full-time jobs on May 31, so when they return home from tour, they’ll be spending “infinite time” on their music.)

“If you’re too deep in the echo chamber you can feel this pressure to kick out new material every week. But when we put out a debut LP we want it to be as good as the albums that inspire us to make this music.”

It’s this kind of careful attention to detail that draws listeners in to Trails and Ways, the delicate layers of sound, the snippets of additional beats and instruments. Each track tells a story, and is intended to take a listener on a journey. As Brower Brown points out, that intension is right there in the band’s name. These joint interests in both traveling and exploring other cultures came from the time Brower Brown and bassist Oppen spent living in Brazil and Spain. “When you’re traveling in foreign space, wrestling with language and identity to express yourself takes you — by necessity — to the most creative place I know…and a lot of our songs and musical obsessions were sparked in those moments at the raw edge of translation and incomprehension.”

The band will release the EP through Non-Market, a brand new East Bay based DIY community label in which Trails and Ways are very involved. “We hope [it] will transcend the market of music promotion and distribution, by just having Bay bands write about other Bay bands,” Brower Brown says. “So it’s a open, principled, non-commercial music community.”

Along with being a stop on the band’s “Trans-American Trilingual Tour,” the Independent show is also kind of the label kickoff. The band’s San Francisco openers are local pals, Social Studies — and Astronauts Etc., which has also been a core part of the Non-Market dream.

The tour will take the travel junkies through much of the US and Canada. They’re “looking forward to 8,000 miles of time together in the minivan,” along with the hopes of popping off the road for hikes and lake swimming. The band is also itching to meet Drake in Toronto, and will play the same stage as both Kendrick Lamar and Tom Petty at the Firefly Music Festival in Delaware, plus a show in Chicago with its Portland, Ore. friends Radiation City. Even without the release of a proper full-length LP, the group will be headlining most of its US tour.

If you somehow missed killer 2012 LP Henge Beat, Total Control is an Australian punk supergroup of sorts, featuring members of Eddy Current Suppression Ring, UV Race, and more. The band, which recently put out a split with Thee Oh Sees, sounds like a mix of Suicide and Joy Division, with lyrics aimed at sci-fi curiosities and paranoid guitar lines doused in just the right amount of doom and gloom.

It’s been awhile since we’ve seen the Lumerians out and about in San Francisco, as the five-piece spacey, psychedelic wanderers (also recently described as a “Oakland stoner quintet”) reminded fans on social media this week. They also claim to have some secrets in store for the crowd at this show, which opens with fellow locals Wax Idols, at SF’s newest music venue, the Chapel. With this group, it’s got to be something cosmic.

Local record and book shop the Explorist International (which specializes in rural American music, jazz, international pop and folk, and electronics) is curating shows at Amnesia for the month of June, this week bringing out Sub Pop’s NVH, a.k.a. Noel Von Harmonson of Comets on Fire. With this solo project, the experimental knob-twister and guitarist blasts out mind-numbing soundscapes. With Diego Gonzales, DJs Special Lord B and Phengren Oswald. Upcoming Explorist International-curated shows at Amnesia include free-jazzists Aliacensis (June 18) and Nordeson/Shelton Duo (June 25).

SONNY AND THE SUNSETS

Here’s yet another show at the newly re-opened Eagle Tavern: the record release party for Sonny and the Sunsets’ newest, Antenna to the Afterworld. The confessional record, which hints at Modern Lovers and Silver Jews (a shift from country break-up record Longtime Companion), opens with Sonny Smith talk-singing a call-and-response conversation, “Something happened/I fell in love/but it was weird/Real weird.” “Good weird?” the voice on the other side implores. With Burnt Ones, Cool Ghouls.