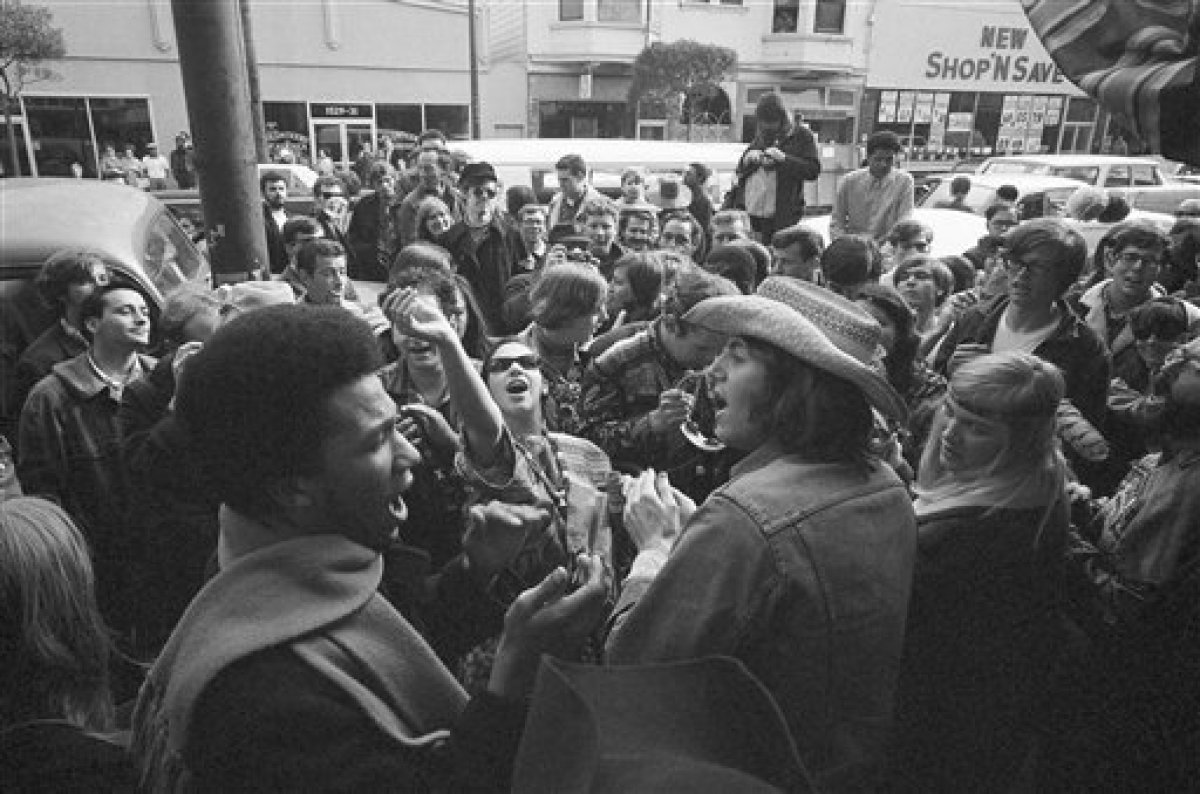 Recently, I came across this great series from 1995 on YouTube, “Dancing In The Streets–the History of Rock and Roll”. Ten episodes from the R/B meets Country birth of the music all the way to hip hop. Really well done, excepting some glaring errors (whomever wrote the Ramones segment knew nothing of the band) and omissions (not an Elton John fan, but the guy was a recording artist of enormous success, ditto Rod Stewart and no MC5 or New York Dolls). As it is television and not music, the colorful parts of rock’s history got a lot of play.

One entire segment was devoted to psychedelia. Was great, too–bookended by the Byrds’ “Eight Miles High” and “You Ain’t Goin’ Nowhere”. Naturally, there was a lot of attention devoted to San Fran and its bands and the importance of the City in rock and roll. Which can’t be denied. San Francisco–from the mid 50’s to the mid 60’s–was America’s creative crucible. The Beats of North Beach and the hippies of the Haight are now cultural signifiers and as the program pointed out, they didn’t happen in San Francisco by accident.

As the Airplane’s Paul Kantner points out, San Fran is a seaport and seaports tend to be where the collision of disparate ideas from around the world makes new ones. What’s not in the piece is the real reason the Beats flourished in SF. In New York, cabaret licenses were hard to obtain in the 50’s, in SF, they weren’t. Therefore, a city with a population 1/10th the size of New York’s could compete with New York. As is also said in the show, all of SF’s old ballrooms were ideal for Kesey’s acid tests and the laissez faire attitude of the City wasn’t entirely due to its open-mindedness, but simply that San Fran had no idea what was coming in 1966 and 1967.

At the end of the show (which featured Jerry Garcia’s last interview and he was good naturedly hilarious in it), I wondered if in this day and age, San Francisco could ever be the giant of the zeitgeist again. Took me less than a half a minute to realize that the answer is a resounding “no”.

Every factor that figures in to a locale becoming a spawning ground for the arts no longer exists in SF. Artists need two things above all else–lots of space and cheap rent. An “artist” that works a 50 hour a week day job to pay the bare bones of rent, food and heat hasn’t got much left by way of time and energy. If the same artist is in a Mission one bedroom (and shared), there’s no elbow room. Nowhere to rehearse one’s craft and nowhere to paint or draw without getting up in someone else’s space.

That’s to say nothing of a “night life scene” where the price of two drinks and a cover could buy lunch five days a week in another city.

Don’t hand me the idea that the young software and PNS developers are somehow the same as Jack Kerouac, Jerry, Janis and Grace. Yeah–they’re all young (not now, of course). But conflating commerce with art that no one thought would make any money in the first place because “that’s what kids do now” is jive. They’re opposites. Artists and their fans are messy and free and by their nature hard to control, businessmen and politicians are soulmates. Catering to the very wealthy is a slam dunk to the Ed Lee’s and Nancy Pelosi’s of the world because the wealthy contribute to them.

Don’t get me wrong–the 60’s weren’t utopia and the hordes of homeless people that have flocked to SF since have become an almost intractable problem.

San Francisco is the country’s mosy physically beautiful city. It has a long history of upheaval (culturally and seismically). But in our time, Detroit, Erie or Buffalo are becoming just as likely if not more so to be where the arts boom next. They’re cheap and with the Internet, an artist’s work can go anywhere when he or she don’t have to. Fact is, plain old venality is doing SF in. Pandering to the few at the expense of the many means that the fertile underside of the (actual) creative class gets priced right off the peninsula. All that’s left is the safe and staid that San Fran has thumbed its nose at forever. Sad.