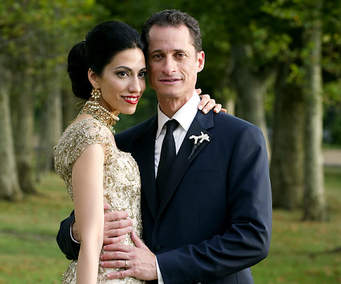 Midnight Wednesday, Anthony Weiner–who resigned from Congress two years ago because of a “sexting” scandal–has announced he will run for mayor of New York City. He will enter a crowded field to replace Michael “Big Gulps Are Murder” Bloonberg.

As he has a boatload of cash and 100% name recognition, he will be a force to be reckoned with. Plus, his main opponent, Christine Quinn has serious personal issues of her own. New York politics and politicians being what they are, from Walker and LaGuardia to Ed Koch and Rudy Giuliani, means that this will be very amusing to the rest of the country.

Weiner, if you recall, sent out bare chested (among other things) pics to females via text a few years ago. That was the proximate cause of the uproar behind his resignation. It can be debated whether this was really the reason or not–Weiner went after the insurance industry with an awful lot of gusto. And, like fellow New Yorker Eliot Spitzer, he paid for it–screw with the mega-wealthy while you are playing games on the Internet or with hookers and they will snag you.

The difference between Weiner and Spitzer is while Spitzer (a lawman) was breaking the law and having actual sex, Weiner was doing neither. For all of the hand-wringing and ridicule Weiner brought on himself and his wife, he did absolutely nothing wrong. In fact, he did absolutely nothing at all, because sexting and cyber sex are not sex. At all. By any stretch of the definition of sex.

Minus actual contact between parties, there is no sex. Weiner could not impregnate the women he was sexting nor could he directly provide them sexual pleasure and most importantly, if this is sex, when has sexting ever led to an STD? If there is no sexual transmission, there is no sex. The objection that he was indiscreet stands (no pun), but if there was any real unhappiness over these non-existent trysts, where is it?

Weiner, like Spitzer and even the pitiful John Edwards, were held up as pariahs because of their dalliances. But the truth is, they enraged the powers that be, from hammering Wall Street to suggesting that there are “two Americas” where the lesser one gets screwed a lot harder than anything in A Weiner’s provocative prose and photos. As the voters of South Carolina just sent back a cheater whose actual behavior is a hundred times worse than Bony Tony’s was, maybe this idiocy can finally be put to rest once and for all, but I wouldn’t count on it.