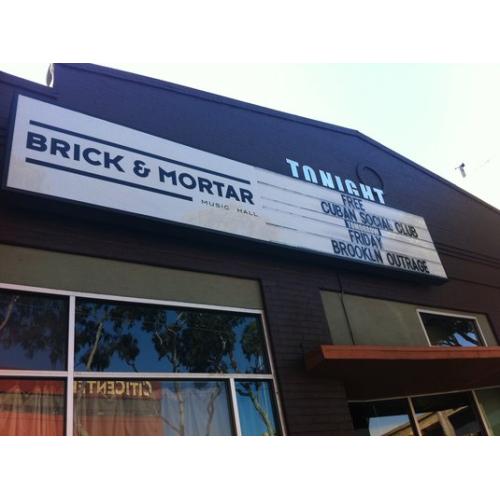 The San Francisco Entertainment Commission last night voted to restrict the hours, sound limits, and other operating conditions for Brick & Mortar Music Hall — the Mission Street live music venue that has received a series of noise complaints from its neighbors on Woodward Street — until it completes soundproofing work to deal with the problem.

While acknowledging the sound problem and pledging to address it, club co-owner Jason Perkins responded to the action today with a written complaint that makes a serious allegation: that Entertainment Commission inspector Vajra Granelli last year recommended Brick & Mortar hire an overly expensive security company he founded, Yojimbo Protective Services, and that would solve the problems it was having with the commission, Perkins wrote, “an obvious conflict that a person who is regulating us is also trying to get us to use his company.”

There is no proof that Granelli actually made the extortionary suggestion or that it was connected to the club’s current problems with its neighbors, who seem to have legitimate issues with noise. “They have a sound problem and they have to deal with it,” Entertainment Commission Executive Director Jocelyn Kane told us, calling the allegation against Granelli a diversionary tactic that has nothing to do with the case. “The neighbors are being reasonable, they just want them to fix the sound.”

Yet it does appear that Granelli is still involved with Yojimbo Protective Services, which he co-founded in 2003 to do security for entertainment venues, and that may violate city conflict-of-interest rules against outside employment in an industry that he regulates. Kane said Granelli was out-of-town and that she would get him a message about addressing the issue, but we never heard from him.

When we called Yojimbo for Granelli, someone who identified himself as Ed the CEO (presumably co-founder Edward Cissel) said, “I can take a message for him. He’s not usually here at the office.” And when I identified myself as a reporter for the Guardian, Ed said of Granelli, “He has little or nothing to do with the daily interactions of this company.”

Yet Granelli (who was profiled by the Examiner last year) remains the agent of service on the company’s business permits. Kane said she was aware of Granelli’s connnection to Yojimbo, but that, “When he took this job, he divested himself.” Indeed, on the Form 700 Statement of Economic Interests that city employees are required to complete, which Granelli renewed last month, he claims to have no reportable outside economic interests. A link to a list of clients and description of its focus on entertainment venues on the Yojimbo website has recently been removed.

Later, when we noted that Granelli still appears to be involved with the company, Kane wrote, “It remains my understanding that Vaj Granelli sits on the Board of Yojimbo but derives no financial benefit from the company, nor is responsible for any day to day operations.”

Perkins alleges that last summer, “I was told I had a security problem by Vaj Granelli,” who recommended he hire Yojimbo shortly after the club received its first of seven noise violation citations, which Granelli issued. Perkins said that when Granelli made the suggestion again following another noise complaint in October — by which time Perkins said he had learned of Granelli’s connection to the company — “I blew up and told him to fuck off, and immediately we start getting hammered by complaints.”

During the hearing last night, the commission had little patience or sympathy for Perkins, accusing him of misrepresenting his neighborhood outreach efforts and creating problems in the neighborhood by refusing the spend the necessary money on soundproofing the club, a perspective supported by several Woodward neighbors who testified they could hear music in their living rooms and that Perkins has resisted their entreaties to fix the problem.

“Rather than doing it, I believe you’ve used delay tactics,” Commission President Audrey Joseph told him, urging him to instead, “Be a big boy and just deal with the problem, which is what you need to do.”

The commission then voted unanimously to recondition the club’s entertainment permit to require it to close at 11:30pm on weeknights and 12:30am on weekends, cap its allowed outside sound at 80 decibels, provide a direct phone number to neighbors with complaints, and complete necessary soundproofing work by next month.

“We got sucker-punched last night, it’s so unfair,” Perkins told us, noting that the new sound limit will essentially prevent them from hosting live music. He claims that he was only recently made aware of some of the noise citations and they have repeatedly upgraded their soundproofing.

Kane denies that Brick & Mortar has been treated unfairly, and she said that it’s a popular music venue that everyone involved wants to see continue operating. As for Granelli’s connection to Yojimbo Protective Services, she told us, “I’m not suggesting he’s not affiliated, I’m just saying it’s not relevant.”