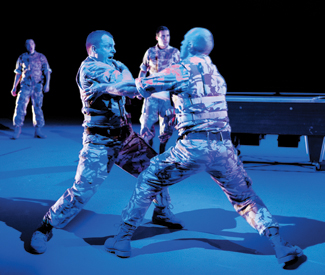 THEATER Audience members entering the drill court of the Mission Armory and climbing the bleachers to their seats do so amid the buzzing drone of Highland music and an eager swarm of searchlights, all of it punctuated by booming pre-show announcements over the PA. When silence falls at last, a solitary man in jeans and leather jacket emerges a bit sheepishly from a doorway at the far end of the stage. Appearing small and inconsequential against the stadium-like surroundings and the preceding pomp and circumstance, he stutters a few opening lines before returning to his element — the local pub in Scotland’s Fife. There he assumes wholly different proportions, as he and his friends relay their own perspectives on the spectacle of war.

In Black Watch, the touring revival of a site-specific 2006 production by the National Theatre of Scotland (currently being presented by American Conservatory Theater), writer Gregory Burke and director John Tiffany set out to present a spectacle grounded in real lives. To that end, they blend fictionalized scenes with the accounts of young Fife veterans who served in Iraq as part of Scotland’s famed 300-year-old Black Watch regiment.

Meanwhile, the show employs a hybrid theatrical form that draws equally on the conventions of the music hall, the docudrama, and physical theater. The stage is a wide and busy corridor running between two tall banks of seats, with scaffolding on either end where actors also play, video monitors flicker, and large video projections are sometimes cast.

This is the production’s fourth international tour, remarkably. But despite its continued popularity abroad, little in it seems especially surprising or penetrating. There’s a lot of brash dialogue (hyper-macho, casually chauvinistic, expletive-laden soldierly banter in slightly toned-down Scottish brogues); some muscular dance routines (with the martial drills the most interesting); a sometimes affecting, sometimes overbearing musical score; and a few flashy staging ideas (including an eerily unexpected entrance in the barroom).

But whether the play is offering gritty realism or stylized interpretation, the message is generally and familiarly on-the-nose: war seems glamorous to the young man back home, and hell to the soldier in the field; soldiers are sold out by politicians; and soldiers don’t fight for their country or some high ideal, but for less abstract ties and especially for their fellow soldiers. The lies, illegality, and massive unpopularity surrounding the Iraq War is also hardly new ground in itself — though one line rings with unintended irony in the Armory setting (where Kink.com has been in residence since 2007) when a Scottish officer (Stephen McCole) jokingly admits the war is being waged for “petrol and porn.”

The narrative toggles between the aforementioned pub — where Cammy (Stuart Martin) and his fellow vets somewhat grudgingly and aggressively divulge their experiences to a timid middle-class Writer (Robert Jack) — and a flashback to the daily drudgery and danger of Iraq in 2004, where the company’s assignment in support of devastating American military assault on Fallujah leads to the death of three Scottish soldiers in a suicide car bombing. There’s also a segue into a somewhat silly if historically relevant recruitment scene at the outset of World War I, which further convolutes a narrative already burdened with details about political machinations at home and distress over “amalgamation” (the British government’s ill-timed decision to dissolve the Black Watch and fold it into a single, cheaper Royal Scottish Regiment).

The play never represents Iraqi lives or perspectives, nor is there more than passing sympathy for them among the characters; this is instead a work focused squarely on the Scottish soldier’s experience and, most significantly, the molding of that experience by a state reliant on a voluntary military. In a world of limited and dispiriting options, the military opportunistically and very successfully offers young men a seeming basis for pride in themselves and in an inflated (or degraded) masculine ideal. Black Watch is itself successful in those rare moments where sentimental spectacle gives way to images that register the profound, uneasy, and complex implications of this fact.