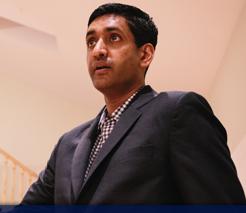 When Ro Khanna, a young, energetic intellectual property lawyer, ran for Congress against Tom Lantos, he was the candidate of the progressives. I liked Khanna, and appreciated his willingness to take on the almost unheard-of task of challenging a longtime incumbent in a Democratic primary. At that point, in 2004, the big issues were the war and the PATRIOT Act, and Khanna was against both. Lantos, who was always hawkish on defense issues (and a die-hard supporter of Israel, no matter what the Israeli government was doing), was clearly out of touch with his district. But Khanna never got much traction, and he lost pretty badly.

Now he’s back, in a new era of top-two primaries (which has its own problems), and in a different district. He’s taking on Mike Honda, who, like Lantos, has been around a while, and hasn’t faced serious opposition in years.

And this time around, it’s not Matt Gonzalez and the left supporting Khanna — it’s Lite Guv Gavin Newsom, who beat Gonzalez for mayor of SF, along with Ron Conway and the tech industry. And  instead of talking about failed US military policies, he’s talking about bringing the interests of Silicon Valley to Washington:

“The premise of this campaign is quite simple,” Khanna told the crowd. “We’ve had quite brilliant people…use technology to change the world. And it’s time that we actually change politics, that Silicon Valley has the potential to do this.” “It’s not just about having a tech agenda. This is about something much deeper — our values, and our ability to use those values to change Washington and the world,” he told them.

Now: It’s not as if Mike Honda has been horrible to Silicon Valley. He’s been involved in all sorts of tech-related issues. But he’s of a different generation, and however stereotypical it may be to say it, there’s a certain level of ageism in the tech world right now. Honda is old; the wealth in the tech world is overwhelmingly young. Politico notes:

Khanna’s decision to take on Honda also reflects a long-standing frustration among many young California pols who have been patiently waiting for older members to exit the state’s congressional delegation. Last year’s induction of an independent redistricting committee and a jungle primary system in which the top two finishers in an open primary advance to the runoff regardless of party affiliation, helped push many senior members into retirement.

Oh, and Honda is very much a pro-labor guy. And tech firms are almost never unionized, and their owners and workers don’t tend to have the same sympathies for labor unions as young activists did 20 years ago.

Politico doesn’t give Khanna much of a shot; it’s going to be a tough battle. Honda’s been around the district forever, and has no apparent scandals or gaffes (and unlike poor Pete Stark, he doesn’t seem to be losing his marbles).

But money talks, and Khanna’s got a lot of it — and in some ways, this will be a new-money-v.-old-Democratic Party, tech v. labor kind of battle that will say a lot about where Bay Area politics are going as the region’s population, and wealth, are dramatically and rapidly changing.