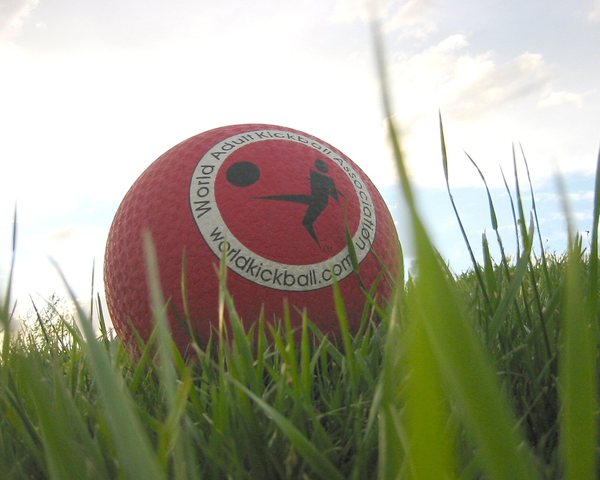 IN THE GAME It’s not kickball; it’s matball. Which looks a lot like kickball, with one big difference: You can have more than one runner at a time on any given base. You can have up to three, but if a fourth is incoming, someone’s got to go.

You don’t have to stop running, either, when you reach home, in some versions of the game. You can keep going — back to first, and around the bases again. In gym class, this was a way to make kids run laps without quite exactly knowing it.

“That’s the reason we’re playing at Dolores Park,” he said. “You have people, and other variables, that you can’t predict.”

“Like the volleyball net in left field?” I asked.

“That’s one of the variables,” he said.

The volleyball net went up in the fourth inning. Someone came, set it up, and then didn’t play. After grumbling a bit, the matballers turned it into a home run fence. A very shallow one. A “mesh monster” of sorts.

Other variables are self-imposed. There are no force-outs, for example. You have to either hit or touch the runner with the ball, between bases. Or, of course, catch it.

The kicking team supplies its own pitcher. And the kicker gets to choose from a whole menu of balls that lie scattered about the pitcher’s feet. There was a giant one, a tiny one, and a couple of different midrange sizes.

My favorite of Li’s innovations, though, is his loose interpretation of the basepath. Twice during the game runners, thinking they were out, left the field of play . . . only to find they had in fact not been called out; nor were they out for leaving the basepath. And, thanks to Li’s leniency, they had every right in the world to try and get back safely. Neverminding that the base, by that time, was being guarded by a defender with a ball.

Hilarity ensued. In one instance, a couple offensive teammates came charging from the sidelines toward the base, like pulling guards and tackles, to block for the poor, displaced baserunner.

Watching from the hill, with a picnic, I almost choked on my chicken I was laughing so hard.

“That’s the whole idea,” Li said later, when I asked about this particular play. “It hasn’t happened that much, but when it does, I let it happen. It’s entertaining. People get creative.”

Matball is not a low-scoring game. The score was 14-0 before the first out was recorded. It was 15-14 at the end of the first inning — at which point they decided to move the bases back a little.

Li, an energetic, easy-going, backwards-hatted commissioner, moderates the game, photographs the bejesus out of it, and fills in for anyone who has to leave early or turns their ankle. He also buys drinks — alcoholic or not — for the winning team after.

Before Li’s Meetup group, Bay Area Kickball, formed a couple years ago, he played on a team in a league. “I found the game a little too serious. A little too much alcohol,” he said. “It wasn’t that much fun for me.”

Now, once or twice a month, he sets up these more casual (and more sober) coed games through Meetup. If under 25 people show, they play kickball. If more than 25, matball.

The one I saw . . . there was a good mix of men and women, serious athletes and beginners. One with keys jangling from his belt loop, others in cleats. In truth, the athleticism surprised me. I saw one guy run with the ball from centerfield all the way to home plate to bean someone just as they were about to score.

“As long as there are people who can play very well, it kind of keeps the game going, and keeps it interesting,” Li said. “I’m trying to balance all these things.”

He’s doing a good job. Impressively, with all that scoring, and all the chaos, plus the almost-arbitrary divide of serious athletes and just-for-funners, it was, in the end, a one-run game.

The team called Cannibal Sheep won, 36-35. But the losers, the Winners, had the tying run on 2nd base when the final out was recorded.

Oh, and by the way, that “final out” was the fifth, not the third. You get five outs in the ninth inning, so long as both teams agree to it.

Then, before the bar, both teams pile up together for a group photo for the Web page. Which, in this case — as the only member of the press present — I had the honor to snap. Check it out.