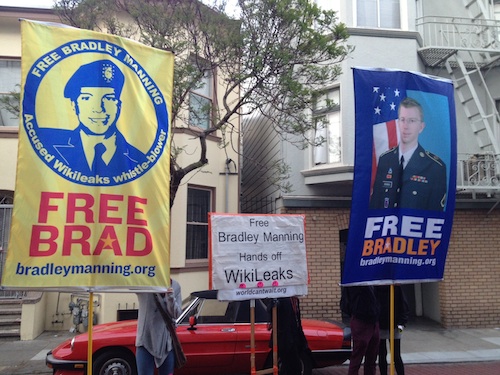 Over the weekend, Pride posted a Facebook note saying that, despite its promises, it would not be holding a public meeting to address its horrible handling of the Bradley Manning for Grand Marshal scandal until after Pride, and that “SF Pride’s decision concerning the election process of Bradley Manning as Grand Marshal being consistent with SF Pride’s long-standing Grand Marshal election policy is firm. Thus, the discussion of that matter is closed for this year.”

People were not very happy about this. Last night a well-attended “mock Pride board meeting” protest was held, with a row of empty chairs symbolizing Pride’s absence of leadership.

Now Supervisor David Campos has issued a stern letter to the Pride Board, citing Pride’s status as a city-funded organization and its failure to operate with transparency, and advising them to meet with the public before the festival at the end of June.

Could Pride get its funding yanked if it continues to, ahem, Stonewall? Here’s Campos’s letter:

To Executive Director Earl Plante, Board President Lisa Williams and members of the Board of Directors of San Francisco Pride:

I am writing to express my concern over the recent actions of the leadership of Pride in the wake of the controversy surrounding the naming of Private Manning as a Grand Marshall for this year’s parade. The decision to rescind this honor is unprecedented and the community has every right to be concerned about the consequences of this abrupt, top-down directive. Most importantly, however, is the obligation Pride has to be accountable, transparent and representative to the diverse LGBT community it serves. As an organization which receives City funding, Pride has a responsibility to operate with transparency and accountability, and to allow for timely appropriate discussions with the community as needed. The failure of Pride leadership to do so in this circumstance is contrary to this responsibility.

Controversy is not a new phenomenon to Pride festivities, nor is it a valid reason for Pride not to fulfill its responsibilities to the broader LGBT community. The recent statement made by Pride that the discussion on this matter is “closed” is disturbing, and may serve to further divide the community and foster long-lasting resentments.

I urge Pride to hold an open community discussion on the matter of Private Manning’s awarding and rescission as Grand Marshall, and ask that this meeting be held as soon as possible and before the June Pride festivities. We must remember that Pride was born as a tribute to the courage of the LGBT community, and walking away from this discussion is contrary to that legacy.