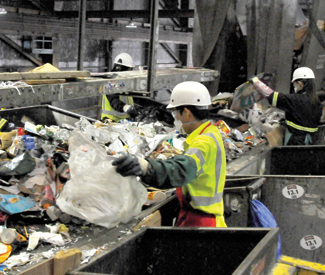 In January, Mayor Ed Lee appeared on the PBS NewsHour to talk up the city’s Zero Waste program, an initiative to eliminate all landfilled garbage by 2020 by diverting 100 percent of the city’s municipal waste to recycling or compost. “We’re not going to be satisfied,” with the 80 percent waste diversion already achieved, Lee told program host Spencer Michels. “We want 100 percent zero waste. This is where we’re going.”

But somewhere in Te Anau, New Zealand, an environmental scholar tuning into an online broadcast of the program was having none of it. “I sat there thinking, no, you’re not. It would be great if you were, but you’re not — for obvious reasons,” said Robert Krausz, who’s working toward a PhD in environmental management, describing his reaction during a Skype call with the Bay Guardian.

He may as well have taken aim at a sacred cow. The city’s Zero Waste program has near-universal support among local elected officials, and has garnered no shortage of glowing media attention. San Francisco’s track record of diverting 80 percent of waste from the landfill is well ahead of the curve nationally, scoring 15 percent higher than Portland, Ore., a green hub of the Pacific Northwest, and 20 percentage points or higher above Seattle, according figures provided by Recology, San Francisco’s municipal waste hauler.

Despite the city’s well-earned green reputation, Krausz arrived at the pessimistic conclusion that “San Francisco’s zero waste to landfill by 2020 initiative is headed for failure.” In seven years’ time, he predicts, the program deadline will be marked with a day of reckoning rather than a celebratory gala. “I think the city is setting itself up,” Krausz told the Guardian. “Somebody’s going to be holding the bag in 2020.”

Sporting a goatee and glasses, Krausz comes across as the type you might find locking up his bike outside a natural foods store with canvas bags at the ready. When he visited San Francisco, he said he was ready to be wowed by the example of an ecologically enlightened city, yet ultimately left in disappointment. “It was just another affluent American city, in terms of consumption.”

The problem, he argues, is that people are still buying way too much disposable stuff — and a significant amount can’t be recycled. Plastic bags, food wrapping, pantyhose, plastic film, pet waste, construction materials with resin in them (like the popular Trex decking), and particularly disposable diapers have nowhere to go but into the landfill.

San Francisco produces a total of about six kilograms of trash per person per day before diversion is factored in — three times the U.S. national average. That’s a sobering figure that puts a slight dent in the city’s eco-conscious image. It’s not really fair to denizens of the city by the Bay, because it counts trash generated by 20 million annual visitors, daytime employees, developers, and businesses as well as residents. Nevertheless, the trash output ranks well above the per capita average for the Eurozone, which clocks in at a minimalistic 0.5 kg per person per day.

The city has earned its bragging rights for making strides toward diverting waste from the landfill — yet truckloads of waste still leave the famously green city every day. Since 2003, Krausz notes, San Francisco’s overall waste generation has actually increased, from 1,900 to 2,200 kilograms per person per year. At the same time, the per capita amount of waste going into a landfill has dropped, from about 1,000 to 500 kilograms per year. That’s still a lot of garbage.

Krausz argues that San Francisco has no comprehensive plan for achieving Zero Waste, while at the same time having little control over “top of the pipe” consumption, which generates a glut of trash. “While the city has achieved success at managing waste at the end-of-pipe, it has thus far failed to address the fundamental problem of consumption, which is driving waste generation,” his study notes.

Guillermo Rodriguez and Jack Macy of San Francisco’s Department of the Environment counter that there is a strategy, involving a host of different measures ranging from education, to policy initiatives, to incentive programs aimed at reducing waste. They think zero waste is possible. “We’re probably at 99 percent diversion here in this office,” said Macy, who serves as the city’s Commercial Zero Waste Coordinator. “At least 90 percent of the discard stream is recyclable and compostable,” he added. And as for the last 10 percent, “that pie will be shrinking as we find more markets” for recyclables.

Krausz also raised skepticism about Recology’s bid for a landfill contract that would extend until 2025, five years beyond the deadline for all waste elimination. To that, Recology’s Eric Potashner responded that state law requires 15 years of disposal capacity to guarantee a safety net, regardless of municipal aspirations.

Krausz is critical of San Francisco officials for promising zero waste, but he acknowledges that manufacturers of disposable goods, not city officials, are to blame. Ambitious legislative measures such as San Francisco’s mandatory composting program and a ban on plastic bags have been enacted and achieved tangible results, but for items like ubiquitous thin-film plastics, dirty diapers, synthetic materials, and the like, good solutions have yet to be found.

Krausz’ study also determined that no city on the planet that’s set out to do so has ever actually succeeded at achieving zero waste. “If you are a city that is a member of Western civilization as we know it, you’re not going to be zero waste to landfill, because you participate in the global economy,” Krausz states plainly.

On a recent Friday morning, Recology’s Potashner and Paul Giusti led a tour of the city’s recycling and waste processing facilities. It featured a stop at the transfer station, housed in a large warehouse off of Tunnel Road where all the refuse from the black trash bins is deposited before being carted off to the Altamont Landfill. A sweet, pungent aroma hung in the air. “We call this the pit,” Giusti explained as we approached a sunken area that could have contained multiple Olympic-sized swimming pools, extending a story or two below us into the earth. “This is the last frontier,” Potashner added. “The last 20 percent.”

It was filled with an astonishing quantity of trash, making a tractor that ambled awkwardly over top the mound to compact it down appear toy-like in comparison. The sea of discarded material contained every hue, and floating around in the debris were orange juice containers, cardboard boxes, and thousands upon thousands of (banned) plastic bags. Between 200 and 300 garbage trucks eject their contents into the pit each day, and a single truck can hold up to four tons of trash.

Giusti started working for Recology, formerly NorCal Waste Systems, in 1978, following in the footsteps of his father. Back then, the pit was more like a mountain: “When I would dump my truck, I could walk up this pile,” he said, gesturing toward a set of sprinklers suspended from the ceiling to indicate how high it once extended. State data confirms the story: In 2011, according to CalReycle, San Francisco sent 446,685 tons of waste to the landfill. That number has steadily declined over time; in 2007, it stood at 628,914 tons.

Asked for his reaction to Krausz’s thesis that the Zero Waste program won’t ever actually get to zero, Guisti turned the question around by asking, what’s the harm in trying? “Let’s say you said, zero waste is unattainable,” he said. “Then what’s the number? I think zero waste is an ambitious goal — but if we get to 90 or 95 percent, what a tremendous achievement.” Setting the highest of bars is important, he said, because striving for it provides the motivation to keep diverting waste from the landfill.

In order to actually reduce the city’s garbage from 446,685 tons to zero in the next seven years, Zero Waste program partners Recology and San Francisco’s Department of the Environment face a twofold challenge. First, they must prevent compostable and recyclable material from getting into the landfill pile. Second, they must find solutions for diverting the waste that currently has nowhere else to go but the landfill. With a combination of seeking new markets for recyclables, using technology that can sort out the recyclable and compostable matter, and implementing incentives and educational outreach programs, they’re still focused on the goal. “It’s hard to tell how close we’ll get to zero in 2020,” Macy said. So even if zero waste does not actually mean zero waste in the end, that goal “sends a message that we want to move toward being as sustainable as we can.”