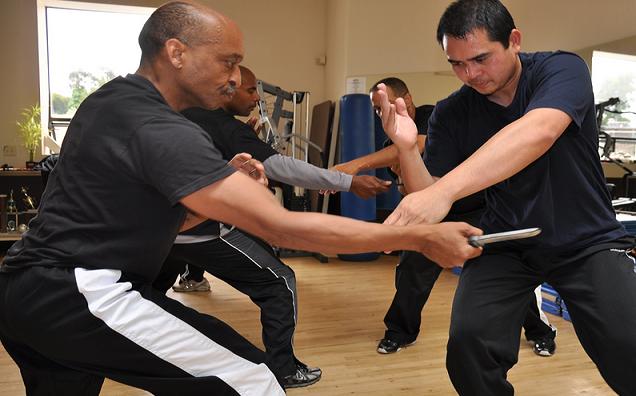 Police officers and security guards get trained in the use of firearms and batons; they know how to hurt and sometimes kill people. But most of them don’t get the sort of basic unarmed self-defense training that would allow them to subdue an assailant without dangerous or lethal force.

That’s where Universal Martial Arts Academy comes in. The only martial arts school with a full-time facility in the Bayview, Universal specializes in self-defense classes for security professionals and also offers classes for the general public.

Jim Hundon, the founder and head instructor, is an expert in small-circle jujitsu and holds multiple black belts in other disciplines. He’s been in martial arts since high school, and trained with two instructors of Chinese kenpo who were students of Bruce Lee. He’s worked with the legendary Grandmaster Wally Jay, and has since developed his own style, ju trap boxing. He’s in the US Martial Arts Hall of Fame.

In other words, he’s a total badass.

In person, though, Hundon is soft-spoken, polite, and humble. His modest-sized studio on Third Street, built from a trashed empty storefront, is clean and well-designed with immaculate hardwood floors. He has regular students as well as contracts with companies like California Pacific Medical Center and Paramount Studios, where he teaches security guards how to keep themselves — and others — safe.

“The piece always missing in law-enforcement training is the empty hand,” Hundon tells me. “You’re in a verbal confrontation and a person takes a swing at you; what are you going to do, shoot him?”

Hundon notes that most cops spend far more time on the shooting range than they do with unarmed self-defense. “Everyone has a right to defend themselves,” he says. “But you don’t always have to strike back. You can protect yourself so everyone goes home alive.”

In 2010, Hundon (who is 64 but looks about 35) received the Bayview Hunters Point Community Leadership Award for his work with at-risk youth. “I love giving back to the community,” he says. “We’re so proud to be the first martial arts school in the neighborhood.”