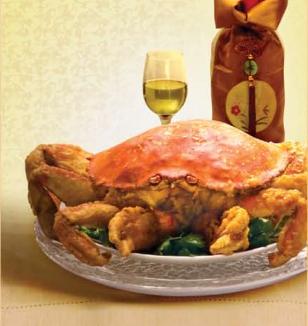 The R & G Lounge has been a fixture in San Francisco’s Chinatown for 28 years. Taking up three floors with a seating capacity of 225, it’s served as the backdrop for many a wedding rehearsal dinner, birthday celebration, and other special occasion bashes. But it isn’t just heartwarming memories of being surrounded by friends and family with a pleasant Tsingtao buzz that linger in diners’ minds. Just as often, it’s the taste of the establishment’s signature seafood plate: salt and pepper live Dungeness crab.

“It was love at first bite,” a 25-year-old Yelper gushes about the first time she tried the specialty, back when she was in the seventh grade. The dish is available year-round, sourced locally when in season.

The R & G Lounge is known for dishing up traditional Cantonese cuisine from the Guangdong province of southern China. Most of the workers are originally from mainland China, and live in the city.

“We have a low turnover,” manager Frank Wong says of his staff, which is 70 strong. Rather than puffing up any star chefs, Wong describes the working atmosphere as decidedly “team-oriented.” Conversations in Cantonese and Mandarin float through the air, mingling with the savory aromas of ox tail stew, chow mein, Peking duck, or steamed fish plucked straight from the tank. Chinatown activist groups laud the restaurant for its exemplary treatment of workers, and efforts to extend benefits to them rarely seen in the neighborhood.

The restaurant has deep roots in the Chinatown community, regularly donating to schools in the area. When hosting community-based functions, “we work a lot through the San Francisco Chinese Chamber of Commerce,” says Wong, adding that multiple family members and investors own the popular restaurant, including Kinson Wong.

This connection helps drive a steady stream of “locals, business people, and tourists” through R & G’s doors, and since its located along the route of the Chinese New Year Parade, the sound of drums and the sight of a dragon procession can make for delicious accompaniment for your meal.