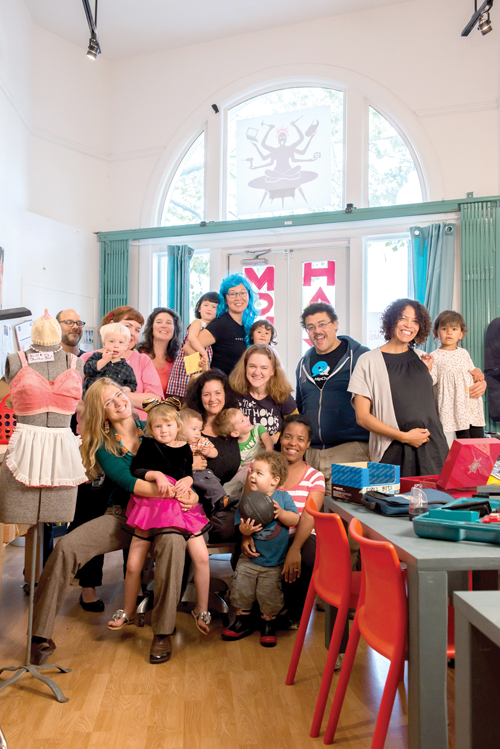 It should be no surprise that here in the veritable center of the tech universe, we hear the word “hackerspace” and flash on a roomful of programmers, busily coding the building blocks of our Internet universe.

But a group of East Bay women have taken the term’s original meaning (as codified by Germany’s Chaos Communication Club in the 1990s) and applied the concept of open community lab to the experience of professional mamas.

“A hackerspace is not an office,” says Sho Sho Smith, co-founder of HackerMoms. “It’s a blank canvas. When you walk into it, it becomes the thing you want it to be.”

For freelance writer Smith and co-founder, film set decorator Karen Agresti, who opened their 1,000 square foot space in April 2012, HackerMoms was to be a place for self-employed mothers to come for community, to share inspiration, to help each other achieve professional and artistic dreams.

Today, about 25 women and a handful of men contribute to the space, where they hold social media workshops, teach each other about mom-specific workplace ergonomic issues, sell their art — many of the HackerMoms once had tech careers and now are “makers,” and bring families together for kids’ “mini-maker” classes and BBQ hang-out sessions. Members include spoken word artists, graphic designers, animators, software engineers, and nonprofit workers.

If you go, stuff bills into the mannequin wearing the vintage lace bra — that’d be where the group collects donations towards keeping the space running.

The space, Smith says, is an important hub for women who might otherwise feel isolated at home with the kids and their work.

“What binds our membership is less our income, or social status, or color, or sexual orientation,” says Smith. “It’s an attitude where you must create or die. That is a core characteristic of a hacker mom.”