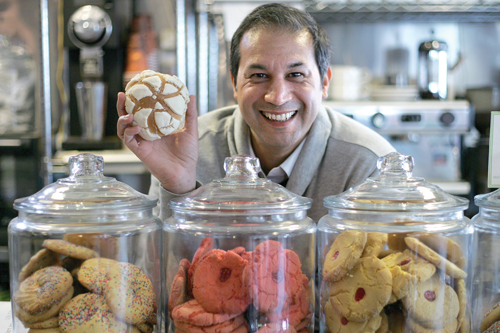 When Jaime Maldonado’s dad Gabriel opened the family’s corner bakery in 1951, it was the only Latino-owned business on 24th Street. In the years since, the story of La Victoria and its famous pan dulce has become, more or less, the story of the Mission District.

That’s never been more true than today, when the bakery’s plate glass windows are filled with Mexican classics, but also dulce de leche scones, Mexican chocolate brownies, and prickly pear beignets that reflect the neighborhoods changing palate — in addition to the conchitas, elotittos, and maranitos that made the place a favorite.

Soon, La Victoria will include a full-service restaurant that Jaime tells the Guardian will “skip over the burrito phase and to straight to original La Victoria. It’ll be the food your grandma would cook for special occasions.”

Few businesses have been able to surf the Mission’s changing demographics like La Victoria. The Maldonados found a way to thrive amid racial slurs in the ’50s. The restaurant became a gathering place and haven for Mexicans when the blocks became carved up along the gang lines delineating close-knit immigrant communities, and a training ground for bakers who brought La Victoria’s recipes to panaderias across the neighborhood. In the ’70s, the fern-filled restaurant in the back room was a habitué for SF’s movers-and-shakers — Dianne Feinstein and Cesar Chavez were known to grab tables.

Hippies, Brazilians, and Argentineans were added to La Victoria’s clientele over the years. In 1992, when Jaime took the reins from his aging pop, he was ready to make the business adjustments needed to keep La Victoria relevant. That meant focusing on the joint’s strengths — no more groceries, less reliance on wholesale business.

Maldonado survived the “cherry bomb in an ant farm,” as he refers to the late ’90s dot-com boom, and the business slowdown after 9/11. He made the kitchen available for rent, and has since attracted an impressive list of alumni through his work with Soul Cocina’s Roger Feely: Hapa SF, Sour Flour, Wholesome Bakery, Venga Empanadas. La Victoria started hosting pop-up dinners, and now looks forward to expanding into different kinds of Latin coffee drinks, and a full sit-down menu.

All in keeping with La Victoria’s Mission to connect with the ‘hood’s new techie residents, stay true to the neighborhood’s history, and connect with the “hybrid kids,” as Maldonado dubs his generation of Latinos who grew up in SF’s foodie scene, but can still appreciate a traditional Mission burrito.

“This corner is dying for someone to stand up and say ‘I’m going to show you how,'” he says. “And we’re going to do that — with Latin flair.”